Magic Leap, the much-hyped Google-backed startup working on mixed reality technology, has officially unveiled its first product after years of rumors and speculation.

The company says it will start shipping the Creator Edition of its mixed reality headset, called the Magic Leap One, in 2018. The price is currently undisclosed.

The Magic Leap One system consists of a pair of goggles, a wireless remote, and a pack that can be clipped onto your clothing. This pack is the engine that powers the experience, eliminating the need to tether the headset to a desktop computer or laptop. Magic Leap’s digital lightfield technology provides the visuals users will see as they look through the headset. This technology generates objects made of digital light that blend naturally with one’s surroundings, according to Magic Leap, which the company claims should make it so that users process virtual items similarly to real-world subjects. The company also says the Magic Leap One should be comfortable to wear for long periods of time.

The sensors inside the headset are capable of detecting surfaces and mapping the user’s environment so that it can accurately generate digital objects that fit with a user’s current surroundings. That means if a user decides to place a virtual TV on the wall in their digital space while wearing the headset, the television would stay in place just as it would in real life. Wearers will be able to interact with the what they’re seeing through the goggles via voice, gesture, head pose, and eye tracking.

Magic Leap will be opening a software development kit next year for developers and content makers to create experiences for the device. Magic Leap also shared some of the early use cases it’s been exploring for its headset, which include placing a floating web browser in the physical space above your desk rather than on-screen, or generating extra displays for your workspace. Although Magic Leap had not officially unveiled its headset until Wednesday, it teased the product by promoting a collaboration with the band Sigur Rós earlier this week.

Read more: A ‘Smart Headset’ War Between Microsoft and Google Could Revolutionize the Workplace

Magic Leap has garnered plenty of attention over the past several years after receiving funding from well-known backers, including the Alphabet-owned Google, Alibaba, Andreessen Horowitz, and J.P. Morgan, among other investors. The company was reportedly valued at close to $6 million as of September, according to Bloomberg, despite the fact that it had yet to announce a single product. Research firm CB Insights estimates the company to be valued at $5 billion, as CNBC notes. But there has been some speculation about the quality of the product following a report from The Information roughly a year ago, which cited former employees who said much of the technology that wowed investors wouldn’t be present in the final product.

The Florida-based Magic Leap is vying with companies like Microsoft, Apple, and Facebook to create the dominant platform in augmented and virtual reality. Microsoft is Magic Leap’s biggest competitor — it unveiled its completely wireless, self-contained HoloLens headset in 2015, which projects digital images over the real world that can interact with the surrounding environment. Apple, meanwhile, is currently focusing on iPhone-based augmented reality experiences, although it is rumored to be working on a pair of glasses as well, while Facebook is working on virtual reality through its Oculus products. 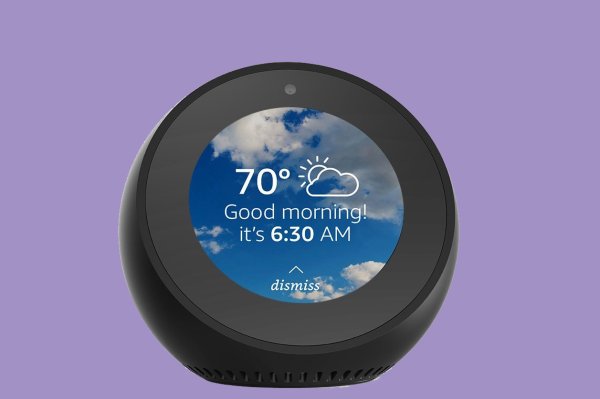 3 Things I Loved About Amazon's Newest Echo (And 3 Things I Didn't)
Next Up: Editor's Pick