Tina and Benjamin Gibson weren’t trying to set a world record. But many are saying that’s what happened when their daughter, Emma, was born last month, a little longer than 24 years after her embryo was first frozen.

Although there are no official records tracking embryo age, experts believe the Gibsons’ case represents the longest frozen embryo to result in a successful live birth, according to CNN. The case is even more noteworthy, CNN reports, because Tina Gibson was 25 when she got pregnant, just a year older than the embryo she and her husband used to conceive.

“Do you realize I’m only 25?” Gibson, now 26, told CNN she remembers thinking. “This embryo and I could have been best friends.”

The Tennessee couple married seven years ago, but assumed they would never have biological children because Benjamin has cystic fibrosis, which often results in infertility. They fostered a few children, CNN reports, until Tina’s father suggested embryo adoption, through which couples donate their leftover frozen embryos to other pairs trying to conceive through in vitro fertilization (IVF). They decided to go to the National Embryo Donation Center (NEDC), in Knoxville.

Embryo adoption has resulted in more than 7,000 births, according to the Embryo Adoption Awareness Center. The procedure is often more successful than typical IVF, NEDC embryologist and lab director Carol Sommerfelt told TIME, because the embryos typically come from couples who “have completed their families and they want to give these remaining embryos a chance at life.” NEDC, for example, has a 57% pregnancy rate and a 49% live birth rate, as compared to a roughly 40% live birth rate for women under 35 who undergo IVF, according to the American Pregnancy Association.

Granted, the Gibsons’ case was a bit unusual—though they didn’t know it until well into the process. “I just wanted a baby,” Tina told CNN. “I don’t care if it’s a world record or not.”

Nonetheless, Emma—who was delivered on Nov. 25 by Jeffrey Keenan, NEDC’s medical director—is certainly special. Several experts who spoke to CNN noted that the embryo previously believed to be the oldest to result in a healthy baby had been frozen for only 20 years.

“It is very rewarding for me to see that the techniques that we were using 25 years ago to freeze the embryos did preserve them to the extent that they could survive being thawed,” Sommerfelt says. “If embryos are maintained correctly…those embryos could be good indefinitely. In other words, they’re frozen in time.” 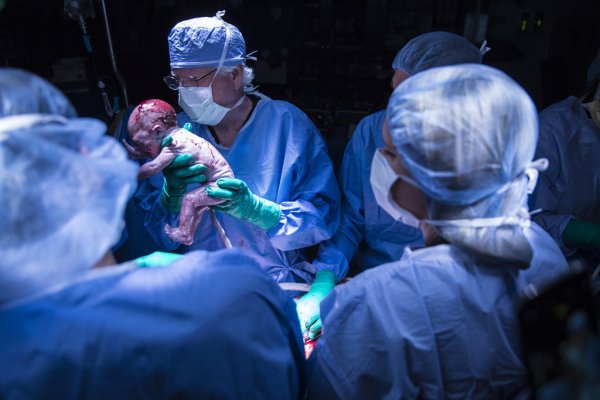 First U.S. Baby Born After a Uterus Transplant
Next Up: Editor's Pick