'I Like to Keep People Guessing.' Flume Talks to TIME About Music, L.A., and Finding Inspiration in a Cereal Box

One last gulp, and Flume sets his plastic champagne flute on the stairwell backstage. In his trademark all-white performance garb, the Australian DJ, musician and producer lunges up the two-tier stage of Hong Kong’s AsiaWorld-Expo to be greeted by 6,000 Creamfields music festival-goers. The speakers start to quake with “Free,” drawing the glittered crowd tight into the handrail. The stage brightens, the bar line empties, flags return to the air—all bracing for “Say It,” his platinum hit, to drop.

On Saturday night, Flume made his debut performance in Hong Kong. Since 2012, Flume—DJ moniker for 26-year-old Harley Streten—has enraptured millions. His self-titled first album and singles—notably, “Holdin’ On,” Disclosure’s “You & Me (Flume Remix),” Lorde’s “Tennis Court” (Flume Remix), and “Drop the Game” with Chet Faker—are ubiquitous on Billboard and Spotify.

He is currently venturing through Asia for the first time to showcase his sophomore album, Skin. Stacked with two multi-platinum singles, the record won the 2017 Grammy for Best Electronic/Dance Album. But with its porous genealogy, “electronic” is a nebulous term, especially for Flume’s experimental music. It’s easy to look askance at his festival megastardom and Flume definitely has his poppy hits, but Skin is far too cosmic for him to be pigeonholed with likes of David Guetta and Calvin Harris.

Flume doesn’t love attention, but he sat down with TIME anyway before his Hong Kong show.

Your second album, Skin, won a Grammy in February for the Best Electronic/Dance album. Congratulations. What did you want to achieve in this album that was different from your first?

I wanted to try something new. A lot of that was by collaborating with others, which I had done in the past but not to this extent. Most of it was done remotely on the first album, whereas with this one I actually got in the studio and worked with people. I was like an old-school producer, where they get in the studio, they make the people feel comfortable, and create the vibe. That was new to me. I also wanted to make something that had a broader spectrum of sounds. From some more poppy stuff to some more weird and dark spaces—I wanted to have both ends of the spectrum.

How would you classify your music?

I like to keep people guessing. Definitely when I’m playing more EDM festivals, it can be a challenge for me. I have to find that middle ground.

Musically do you have a decade you feel that you should’ve been born in?

I’m glad to be born now. Looking back is great, but what I really find exciting is people pushing forward. And that’s in new music, and it’s mostly electronic.

How did you get into making music?

I was quite young, probably 10 or 11. I was shopping with my dad and there was a cereal that had a promotion on it. It was a CD with a simple music-making program. I thought that sounded cool, so I got him to get it. I installed it, and basically saw music in layers for the first time. I’d always been a big music fan from a young age, but I didn’t really understand how it worked. To be able to see inside of it, and see all the different sections, gave me a different perspective on it. And it just grew from there.

Flume performs at the Creamfields festival on Dec. 16, 2017 in Hong Kong.
Aria Chen -

Travel inspires me—getting out of my head, going to different places. A bit of danger. A bit of uncertainty. When I get really comfortable, I’m not very inspired. So it’s this challenge of me wanting to just be comfortable and live a life, but then also to make the art, I have to push myself out of my comfort zone, which often ends up with me just traveling by myself to places.

What’s the most inspiring place you’ve traveled to?

Doing Skin, there were a couple moments where I was going crazy because I couldn’t write. So I kind of freaked out and one time I went to Mexico just solo and hired a car when I got there. I found this little beach and this hotel and ended up just having a little adventure by myself. That was really productive actually. Another time, I again was just stuck on things in the studio, so I got a one way ticket to Tasmania, the bottom of Australia, and just drove around the national parks. I found a log cabin in the woods [and stayed] there for a while. For me, nature. That’s it.

What are you geekish about?

To get strange sounds means you sometimes have to use technology in the way that it’s not supposed to be used. That requires a lot of experimentation and searching for weird plug-ins. There’s this one distortion thing I found by this guy who lives up in Canada. He’s a lumberjack, and he makes plug-ins on the side. You’ve got to dig.

What do you love and hate most about what you do?

I love that I get to create for a living. That’s a privilege. I don’t really like the attention. I’ve never really been a performer or someone that has strived to be up on stage and in front of everyone. So that was just definitely something that’s been not super comfortable for me. It’s cool now, but you know even just this, being in front of a camera right now, it’s uncomfortable.

What sort of cultural significance does electronic music carry?

It’s changing music, and it seems to be more prevalent than ever in mainstream music. It’s the one genre of music that I feel is pushing boundaries thanks to technology. Don’t get me wrong, the power of a great song is huge. But everyone knows what a guitar sounds like, and the ways of treating guitar and acoustic drums.

Your dad is a record producer and filmmaker. Did he expose you to any music or film growing up that was of particular influence?

Yeah my parents used to play a load of different music—Van Morrison, Deep Forest, Santana. I hated Santana by the way—there’s this one CD they used to play on roadtrips. But they introduced me to a lot of really awesome stuff.

My dad did TV stuff and film stuff, and he would often bring me things that the clients weren’t happy with and I would try and do music for some of the smaller TV ads. If the library music wasn’t right, then he’d bring it to me. That was really fun because I would get these little paychecks, which were a lot at the time. It was fun to help dad and work with him.

Flume performs at the Creamfields festival on Dec. 16, 2017 in Hong Kong.
Aria Chen -

You said L.A. has the hottest music scene right now. Do you have any plans to fully move there?

I actually moved out there at the start of this year, so I’m just getting settled right now. I’ve got a house and I’m going to convert all three bedrooms to studios. I want to make a creative hub of people doing cool shit.

The thing I don’t like about producing music is that it’s quite a lonesome experience. It’s just you in a room. Which is fine. But I think it’s important to have that connection with other people and I think that’s what production is missing, and that’s what I’m trying to create in this space. That’s what I’ve been wanting for a long time. It’s really exciting to finally put it into practice.

Be honest: when you’re playing, how much do you actually play, and how much is pre-recorded?

I’m DJing tonight, so I’m actually playing track-track-track, so that’s actually more stressful, more me. It’s more intense because I don’t usually DJ. With the live show, I’ve got keyboards on stage, I’m triggering things, and I’ve got drum pads and stuff. But yeah it’s not 100% live. If it was gonna be 100% live, there would have to be 50 people all on stage at once.

Do your parents enjoy your music?

Yeah some of it they like, some of it they don’t get. They [don’t like] the heavier stuff. There’s one called “Wall F–k” on the album that mom is like, “Hmm, I don’t know about that one. I like the pretty one.” 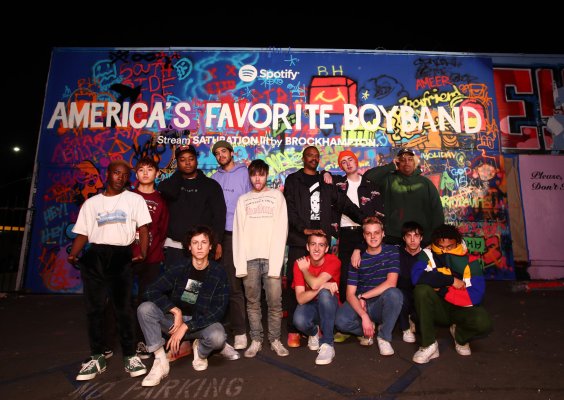 Here Are the Music Trends to Listen For In 2018
Next Up: Editor's Pick