How Does Santa Claus Deliver All the Presents on Christmas Eve? Watch Our Santa Tracker to See

Update, Dec. 24, 2018: This post has been updated with the most-recent data for Santa-eligible children in each county.

Santa Claus may only work one day a year, but it’s a doozy of a job — as our Santa tracker shows below. Beginning at midnight on Christmas Day, he has to reach millions of well-behaved children before they wake up. By one estimate, there are 526 million Christian children in the world under age 14 who celebrate Christmas on Dec. 25, though Santa’s customer list may be a lot higher. A 2013 Pew Research Center study found that, at least in America, 81% of non-Christians also observe the occasion.

Santa’s reindeer may be fast, but he also has to be efficient if he wants to hit every house in time. (Presumably there’s an R&D lab at the North Pole where elves with PhDs run simulated routes year-round.) To help them out, we built a Santa tracker, calculating the optimal route through the continental United States that Santa can take to minimize his total time in the air. Both NORAD and Google also track Santa route, showing him travel the entire globe, but their methodology is less clear. Google explains only that its Santa Tracker only uses “a new route algorithm to chart Santa’s journey.”

So where is Santa now? In our Santa tracker, you can view Santa’s entire path through the 3,108 counties and find out exactly when he will reach your county:

Tracking Santa’s ideal path may not seem like a particularly difficult problem, but it’s one that has vexed mathematicians for nearly 100 years. The quandary is known as the “Traveling Salesman Problem,” in which an itinerant salesman has to visit a variety of cities in a region and wants to minimize his time on the road. Assuming those cities aren’t neatly arranged in a circle, calculating the order in which he should travel to each location remains a problem for which there is no perfect solution. For just a few cities, one can simply compute the total distance between every possible combination. When it comes to 3,108 counties, the number of possible routes is 1,568 followed by 9,500 zeros.

To work through the Traveling Santa Problem for our Santa tracker, we ran hundreds of simulations using four different algorithms that attempt to find the ideal route. (The code for doing so is open-sourced and well-documented.) In each of our simulations, Santa begins in Aroostook County, Maine, the northeastern-most county in the United States — presumably he’s coming from the North Pole, possibly hitting Canada first — and ends in San Diego, the southwestern-most county, where he’s positioned to head to Mexico or go on to Hawaii. The optimal path you see above came out to a mere 88,639 miles to visit each county.

We then had to figure out how much Santa needed to travel to deliver all the presents within each county. Using the most recent Census data, we considered how many children age 9 and under — which is around when belief in Santa dramatically drops off — were living in each county, and assumed that 90% celebrated Christmas, as the Pew Research Center has found. That came out to 36 million children. Then we estimated how far Santa would have to travel within the county to reach all of them, assuming the population was uniformly distributed across the total land area. When you add in all the travel time to deliver presents, Santa’s optimal total route in our Santa tracker is 6,880,123 miles.

So how long does that take him? It depends how fast Santa can go in his turbo-charged sleigh. At an arbitrary velocity of 930 miles per second — that’s 0.5% of the speed of light, which seems reasonable — he can crisscross the country in two hours and three minutes.

While this calculation was rigorously checked and nearly devoured this reporter’s Macbook (you can find the code on Github), one could further refine the estimate in several ways. Census tract data could improve the estimates of how far Santa needs to travel within each county, and juvenile crime rates could potentially pare down the number of children eligible to receive a visit in the first place. Though someone still has to drop off the coal. Stay tuned for the Traveling Krampus Problem. 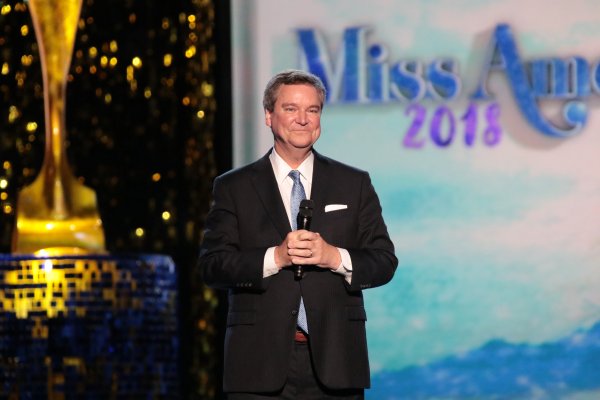 Who Is Sam Haskell? Miss America CEO Resigns Over Emails Criticizing Contestants
Next Up: Editor's Pick