This Is the Problem With President Trump's National Security Strategy

President Trump made quite a show on Monday of heralding the release of his administration’s new National Security Strategy. It’s an impressive document, one that offers a serious roadmap to protect the homeland, promote American prosperity, secure peace through strength, and extend U.S. influence globally. Trump used the occasion to tout what he considers his most impressive accomplishments and to make clear that this document reflects not only his administration’s ambitions but his personal plans, as well. A few problems:

One, if, as the strategy document asserts, the president wants to promote U.S. values and expand U.S. influence around the world, he’s going to need help. U.S. rivals are stronger than they used to be, and U.S. influence has diminished as the Cold War recedes into history. To pressure North Korea, press China on trade, beat back challenges from Russia, exert more influence in the Middle East and battle terrorism, he’s going to need allies. The Middle East is only becoming more combustible. ISIS is defeated in Iraq and Syria, but its fighters are returning home and posing new threats, and the group’s influence continues in cyberspace. These are not battles that should be fought without friends.

When President Trump walked away from the Transpacific Partnership, an enormous trade deal that includes many of China’s neighbors, earlier this year, he passed on an opportunity to strengthen ties with Asian partners. By allowing NATO members to question his commitment to the Atlantic Alliance, he encouraged them to hedge their bets on Washington by improving relations with Beijing. By walking away from the Paris Climate Accord, he allowed China’s President Xi Jinping to claim the high ground on global environmental activism. (It’s noteworthy that this new document doesn’t mention climate change as a threat to U.S. national security.) The president doesn’t seem to see the need for allies.

Two, the first time the president tweets something that appears to contradict the new strategy, how should the world understand the contradiction? Does Trump believe his own strategy? How does the principle of “America First” square with plans to promote democracy in other countries? How much will the administration expect taxpayers to invest in the democracy promotion project? The strategy doesn’t answer these questions, and the distance between Trump’s rhetoric and some of the more high-minded, values-based principles in the document obscure more than they reveal. In fact, the speech Trump used to introduce the document had plenty of contradictions of its own. He would have done better to simply release the strategy.

Three, leaders lead by example. Everyone in the world can see that the United States has become a bitterly divided country, and that there is no longer any pretense that “politics stops at the water’s edge.” There is as much petty partisan bickering over foreign policy as over domestic policy. In that sense, the Cold War era is well and truly finished. Add the president’s indifference to rule of law in the United States, and there is little chance that the governments and citizens of other countries will welcome Washington’s advice on how to build a healthy democracy.

U.S. influence around the world weakened during the Obama years. The pace has quickened under President Trump. Nothing in the new National Security Strategy will change that, because actions still speak louder than words. The problem is not the message but the messenger. 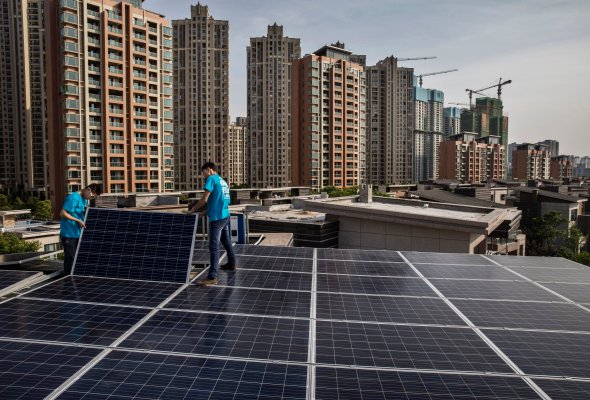 China Could Be World’s Climate Leader
Next Up: Editor's Pick