One Week, No Word. Myanmar Is Under Pressure Over 'Arbitrary Detention' of Two Reuters Journalists

Pressure is mounting on authorities in Myanmar to release two Reuters journalists who have been held incommunicado by police for a week after their arrest for alleged violation of a colonial-era “official secrets” law.

Wa Lone, 31, and Kyaw Soe Oo, 27, were arrested on Dec. 12 after meeting two police officers for dinner on the outskirts of Yangon, Myanmar’s largest city. The government said the pair, who are widely esteemed for their contributions to international coverage of military violence in the country’s west, had “illegally acquired information with the intention to share it with foreign media.”

Since their disappearance, the journalists’ families, friends, colleagues and diplomats have been unable to contact them, and have been told that they are being held at an undisclosed location during the course of investigation. Police told Wa Lone’s wife on Thursday that their questioning should not exceed “two or three days at most.”

“We and their families continue to be denied access to them or to the most basic information about their well-being and whereabouts,” Reuters President and Editor-in Chief Stephen J. Adler said in a statement Tuesday. “Wa Lone and Kyaw Soe Oo are journalists who perform a crucial role in shedding light on news of global interest, and they are innocent of any wrongdoing,” Adler said.

The government’s information ministry said they were charged under Myanmar’s colonial-era Official Secrets Act for “possessing important and secret government documents” related to Rakhine State, where military operations targeting the Rohingya minority have forced more than 655,000 civilians to flee to Bangladesh and raised accusations from top U.N. officials of crimes against humanity and genocide.

The journalists’ “situation appears to constitute arbitrary detention,” Sean Bain, Legal Adviser for the International Commission of Jurists (ICJ), said in a statement, calling for a habeas corpus petition to challenge their arrest.

“Employing the constitutional writ of habeas corpus would compel the judiciary to review the legality of detention. If the detention is unlawful, as it appears to be, the Court should order their immediate release,” Bain wrote in an email to TIME. While the right to submit a habeas corpus petition is protected by Myanmar’s military-drafted 2008 constitution, it is poorly understood and infrequently practiced.

News of the journalists’ arrest was met with outrage. E.U. foreign affairs chief Federica Mogherini called the arrests “a cause of real concern” and urged their release “as quickly as possible.” Last week, Secretary of State Rex Tillerson demanded “their immediate release or information as to the circumstances around their disappearance,” while U.N. Secretary-General Antonio Guterres raised concerns about “the erosion of press freedom” in Myanmar.

Though press freedom has improved in Myanmar since the end of pre-publication censorship in 2012, journalists are increasingly targeted by antiquated, colonial-era laws that “are often broadly defined, carry harsh penalties, and are open to abuse by authorities,” according to ICJ. Three journalists were detained for 81 days this year under a 1908 unlawful association act for covering a drug-burning ceremony hosted by an ethnic armed group. In November, a group of journalists working for Turkish state broadcaster TRT were sentenced to two months in prison under a 1934 aircraft act for flying a drone near Myanmar’s parliament building. 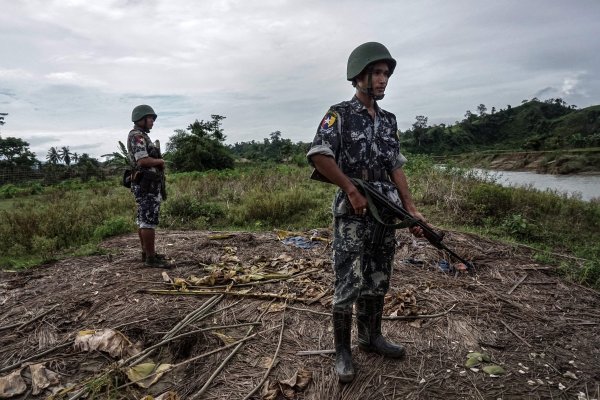 The Myanmar Military Is Investigating a Mass Grave in Rakhine
Next Up: Editor's Pick