The GOP Tax Bill Isn't for the Middle Class. And It Was Never Meant to Be

As they pushed their sweeping tax bill through Congress, Republicans made two central promises. First, that the bill would simplify the U.S. tax code, allowing citizens to file their taxes “on the back of a postcard.” And second, that the overhaul would primarily benefit working Americans and the middle class.

The first claim proved false. And economic experts are skeptical about the second, arguing that the bill aids businesses at the expense of middle-class taxpayers.

“The slant towards upper-income earners and people who run corporations is great, and the losers here are average taxpayers,” says Steve Bell, who served as staff director of the Senate Budget Committee during the Reagan administration. “Don’t fool people by saying it’s tax reform. It’s not. It’s a tax cut for businesses with some contradictory stuff for individuals.”

The final bill — clocking in at 1,097 pages and set for a vote this week—was released on Friday evening after a week of deliberations between the House and Senate to reconcile their two versions. Its biggest change is cutting the corporate tax rate from 35% to 21%. Individual tax rates drop as well, with the highest bracket paying 37%, compared to 39.5% before. Unlike the corporate rate cuts, which will be permanent, the individual tax rate changes are scheduled to expire within eight years, in order to keep the bill’s impact on the deficit within budgetary guidelines. According to a report from the left-leaning Tax Policy Center, in 10 years half of all American taxpayers will be paying more under the Republican bill than they are now.

“You’ve got folks who will get a tax increase, and they all tend to be lower and lower-middle class folks,” Stan Collender, a budget expert and former staffer for both the House and Senate Budget Committees, tells TIME. “It’s a very complicated tax bill. When you put everything together and look at its various provisions, the average lower-income person is almost certainly going to see their federal taxes rise.”

There are elements of the bill that help middle-class Americans. It nearly doubles the standard deduction—the amount taxpayers can deduct from the annual income figure on which they’re taxed—to $24,000 for families and $12,000 for individuals. At the behest of Sen. Marco Rubio (R-FL), the final version of the bill hikes the child tax credit, allowing parents to subtract $2,000 per child from your tax bill. (Both changes are temporary, set to expire along with the individual tax cuts in 2025.)

But ultimately this is a bill for businesses and the people who own them. “The most important part of this tax reform is the corporate tax reform,” says Dr. Wayne Winegarden, an economist with the Pacific Research Institute, a free-market think tank. “How each individual is going to fare will depend on their unique circumstances.”

Many small businesses in the United States known as “pass-through” companies—after the way income “passes through” to their owners—are currently taxed as individuals. The tax bill will grant these businesses a 20% deduction. But the jury is out on whether the windfall for businesses will contribute to significant economic growth as Republicans claim, or whether corporations will pump their profits into hiring more employees.

In other words, the new bill will be a test of trickle-down economics, the Reagan-era economic policy that many experts now consider a flawed theory. Even some Reaganites are unimpressed by the legislation.

“I’m underwhelmed by this bill,” says Steve Hanke, a former senior economist on President Reagan’s Council of Economic Advisors who is now a professor of applied economics at Johns Hopkins University. “I go back to my days as one of the original supply-siders, and they have not followed the ‘five P’s’ that Jim Baker used to recite: prior preparation prevents poor performance. This is not thought out, and this is not well-sold. It’s not like the Reagan tax reforms, where public opinion was completely behind it and everyone understood what was in it.”

Indeed, Americans dislike the bill. According to one recent Quinnipiac University survey, only about one-third of respondents said it will contribute to economic growth or bring about jobs. Most economic forecasts predict the new tax laws will increase GDP only marginally—by just 1.7% in the long-term, according to the Tax Foundation, well below the aspirational 3% touted by Trump in recent months. Meanwhile, the federal deficit will climb by nearly $1.5 trillion over the next decade—a figure that bothered deficit hawk Republicans like Sens. Jeff Flake of Arizona and Bob Corker of Tennessee, though not enough to persuade them to vote against it. (Corker voted “no” on the Senate’s version of the bill, but came out late last week in support of the final version.)

If economic growth is indeed tepid and the deficit continues to grow, the effects will harm less fortunate Americans, experts say. Speaker of the House Paul Ryan has already flirted with slashing funding for Medicare and Medicaid as the preferred method of addressing the debt and deficit. “Those spending cuts are going to be disproportionately borne by lower-income people,” says Jacob Leibenluft, a senior advisor with the Center on Budget and Policy Priorities.

There’s also the worry that the bill’s impact on the deficit will prompt the Federal Reserve to hike interest rates. “Everything from credit cards to student loans to car loans get more expensive,” Collender says. “It means that things that people buy that would give them a leg up in the world — homes, education — may not be available to them.”

All this is why Democrats plan to pummel Republicans for the measure in midterm-election campaigns next year. “I am very concerned that they’re spending their efforts trying to give tax breaks to billionaires rather than dealing with the pressing needs facing Americans,” Sen. Bernie Sanders told TIME last week.

And for the average citizen whom President Trump promised a “big, beautiful Christmas present” in the form of a tax cut? The impact of the Republican bill “will probably be barely noticeable,” Bell says. “Next year, when they file their taxes, they’re going to find that they’re paying as much if not more than they did this year.” 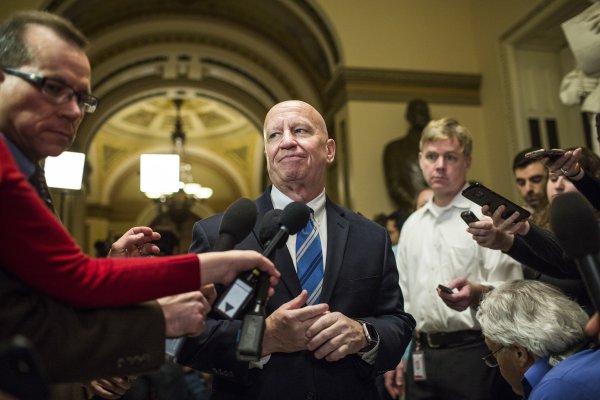 Read the Latest Version of the Republican Tax Bill
Next Up: Editor's Pick