The True Story Behind the HBO Miniseries Gunpowder

In 1605, a group of British Catholics, including Guy Fawkes and Robert Catesby, devised a plan to blow up the Houses of Parliament. They hoped to wipe out the anti-Catholic political establishment and with it King James I, a protestant who introduced strict laws that persecuted Catholics, including the banning of priests.

However —spoiler alert — the plot failed when a group of guards decided to check the cellars and found the conspirators hiding there, moments before they were to set the plan in motion.

The basic story of the failed Gunpowder Plot is a famous one. But although Brits celebrate Bonfire Night with fireworks every year on Nov. 5, the details of that fateful night remain sketchy to many.

Now, the HBO series Gunpowder is shining a light on the events that led to the failed attack, from Catesby’s significant and often overlooked role in masterminding the event, to the cryptic letter that thwarted the entire plot. The three-episode series was originally shown on the BBC in the U.K. and airs in the U.S. on HBO from Dec. 18 through 20. It stars and is produced by Game of Thrones‘ Kit Harington, who is a direct descendant of Catesby through his mother’s side.

But how much do the events depicted in Gunpowder stick to reality, and how much of the show strays from history? Here, we sort the fact from the fiction.

Did Robert Catesby actually come up with the Gunpowder Plot?

Guy Fawkes, played by Tom Cullen, is the man most closely associated with the Gunpowder Plot — and effigies of the notorious conspirator are still burned by Brits annually on Nov. 5. However, although Fawkes’ name is more commonly associated with the story of the Gunpowder Plot than Robert Catesby’s, it was in fact Catesby, played by Harington, who came up with the idea of blowing up Parliament on Nov. 5 — as the show Gunpowder suggests.

Born to a wealthy Catholic family in the early 1570s, Catesby became embittered against the Protestant establishment, including the government and the royal family, when he watched his father being persecuted for refusing to conform to the Church of England. He thought up the plot to destroy both Parliament and King James using exploding gunpowder as early as May 1603, after deciding that the Catholic Spanish government would not help the English Catholics.

In April 1604, Catesby and his fellow Catholic conspirators sent a man to Spain to enlist Fawkes, who was serving in the Spanish military at the time and had a reputation for great courage. He agreed to help execute the treacherous plot, and swiftly returned to England.

Did Catholics really get punished in such brutal ways?

The graphic first episode of Gunpowder shows a woman named Lady Dorothy Dibdale (Sian Webber) being brutally crushed by heavy stones in a public square, for “refus[ing] to enter a plea” that she harbored “a jesuit priest in [her] house.” In the same scene, a young Catholic priest is gruesomely hanged and quartered.

In reality, such punishments did take place during the time of Catholic persecution. John Cooper, a historian who acted as a consultant to the three-part series, told The Times that while crushing was an uncommon punishment, Catholics being hanged, drawn and quartered was “distressingly common.”

Although Lady Dorothy Dibdale did not exist, her character may have been based on a real person: Margaret Clitherow. Clitherow was a Catholic martyr who was similarly pressed to death “under seven or eight hundredweight” for harboring fugitive priests, but her public torture took place in 1586, around 20 years prior to setting of Gunpowder.

Although some viewers complained that the torture scenes were overly graphic and even gratuitous, Harington explained in an interview with the BBC that he thought it was necessary to show the brutal ways Catholics were persecuted in Britain, to help viewers understand “why Robert Catesby embarks upon this very, very violent act.”

“At the time, Catholics were being persecuted and there is nothing in this which is not historically accurate,” he said. “So we needed to see something quite violent from the start which makes us understand why this man might do what he does.”

Did the priest John Gerard escape the Tower of London after his capture?

In episode two, Catesby and his companions are seen helping the priest John Gerard (Robert Emms) escape from the Tower of London in the dead of night. Gerard had been captured by Jesuit hunter William Wade (Shaun Dooley) and questioned over Catesby’s whereabouts — but he refused to disclose any information, resulting in his torture by waterboarding and a barbaric arm-stretching device, known as rack torture. The weak-looking Gerard can be seen escaping through the tower into the moat surrounding it, and then into a boat. But did the priest really escape from the Tower?

In real life, Gerard was indeed captured and hung from a bar in the Tower, but this actually happened years before the Gunpowder Plot was cooked up. The priest was sent to the tower in 1594, during Queen Elizabeth I’s reign, not James I’s. Gerard was tortured during his time as a captive and, in 1597, managed to escape. His jailbreak involved orange-juice invisible ink, string, rope, a boat, a little help from his friends and, presumably in his own estimation, a lot of help from God.

Was King James I openly gay in real life?

In the first episode of Gunpowder, the Scottish King (Derek Riddell) is seen flirting with Sir Philip Herbert (Hugh Alexander) in front of his rather camp court. This portrayal of King James is close to reality, as historians and biographers have long found evidence that the monarch was either gay or openly bisexual.

An intimate relationship between the married King and George Villiers, the future Duke of Buckingham, is well documented, particularly in the vast volumes of love letters the pair exchanged. In one letter, social historian Emma Dabiri told the BBC, King James wrote: “I desire only to live in this world for your sake. And so God bless you, my sweet child and wife, and grant that you may ever be a comfort to your dear dad and husband.”

“Although married with children, he far preferred partying with his entourage, which always included — as one courtier coyly put it — ‘a number of male lovelies,'” explained Dabiri.

Did Robert Catesby have a troubled relationship with his son?

In Gunpowder, Catesby is portrayed as having strained relations with his son, Robert, who he blames for the death of his wife, Catherine, in childbirth. “I am humiliated, despised and impoverished. I have nothing left except the kindness of a loving cousin,” Catesby confesses to Anne Vaux (Liv Tyler), his cousin, in the first episode. To this, Vaux replies: “You have a son, Robert.”

Not much is known about Catesby’s wife, Catherine Leigh, the daughter of a protestant, but history does show that she died in 1598, shortly after the birth of the pair’s second child. (Their first child died in infancy.) Although not much is known about Catesby’s relationship with his son, he was clearly deeply affected by the death of his elder son and wife, and his grief is considered by some to be a factor driving his passion for the Catholic church.

Did a warning letter foil the Gunpowder Plot?

In the third episode of Gunpowder, Lord Monteagle (played by Sean Rigby) — who had ties to some of the conspirators and had engaged in previous Catholic-led plots against the government — receives a strange letter which is difficult to decipher. He immediately takes it to Parliament, where it eventually reaches the King.

“God and men have concurred to punish the wickedness of this time, and think not slightly of this advertisement but retire yourself into your country, where you may expect the event in safety,” it reads. “For though there be no appearance of any stir, yet I say they shall receive a terrible blow, this Parliament.”

At first, the cryptic letter is dismissed as nonsense, but gradually it is understood as a warning for Monteagle to stay away from Parliament on Nov. 5, the day King James was planning to open it.

In the show, the line “they shall not see who hurts them” leads the king to believe that gunpowder may be involved (the king’s father had been killed during an explosion years earlier) — although it’s unclear whether this was the trigger in real life, too. As a consequence of the letter, the Parliament is searched and the conspirators and their gunpowder stash are discovered.

Indeed this sequence of events and the letter did exist; a copy of the real letter is even available to look at online, thanks to the National Archives. Historians are not certain who sent the letter, but much evidence points toward the culprit being Francis Tresham, Monteagle’s brother-in-law. 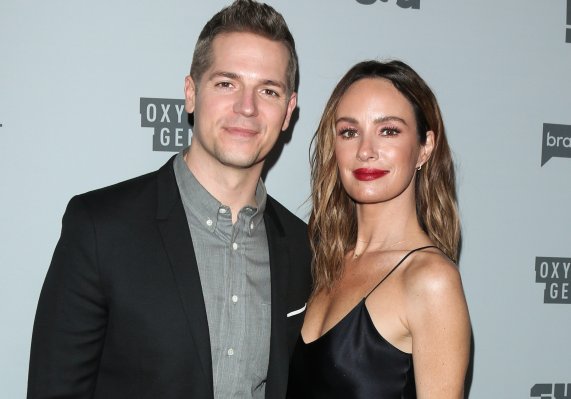