Affable but Vaporous Jumanji: Welcome to the Jungle at Least Has Dwayne Johnson Going for It

Have fond memories of the 1995 Jumanji, starring Robin Williams and a very young Kirsten Dunst, about a bunch of kids who get stuck in the world of a board game? Worried that Jumanji: Welcome to the Jungle, directed by Jake Kasdan and starring Dwayne Johnson as a scrawny kid who magically finds himself inhabiting a not-so-scrawny adult’s body, will zap the remnants of every molecule of childhood joy you ever felt? Don’t worry too much. Jumanji: Welcome to the Jungle has a pleasant, affable spirit, and Johnson is wholly charming. When is he not? But the picture doesn’t leave much of a lasting aura. If your childhood memories can’t survive it, that could be a sign it’s well past time to fully commit to adulthood.

This reimagined Jumanji opens in 1996: Teenager Alex (Nick Jonas) becomes the owner of an old board game his father locates while jogging on the beach. It doesn’t interest him, of course—board games were so 1995!—but overnight the thing takes the form of a video-game cartridge. Intrigued, Alex pops it into his console, and then vanishes.

Twenty years later, a new group of kids find the old console and decide to have a whack at the antiquity lodged inside it. Before you know it, they find themselves stranded in a mysterious jungle, having assumed the avatars they’d chosen for themselves as they commenced playing the game: Shy, skinny Spencer (Alex Wolff) is now a strapping explorer (Johnson); a confident jock nicknamed Fridge (Ser’Darius Blain) becomes a short, goofy zoologist (Kevin Hart); smart-girl Martha (Morgan Turner) transforms into a hot babe heroine in short shorts (Karen Gillan); and teen troublemaker Bethany (Madison Iseman) switches genders to become a somewhat portly cryptographer (Jack Black).

Stuff happens, ostensibly involving adventure and danger, though none of the perils of this island seem all that troublesome: Each character is granted three lives, and after the last one is used up, it’ll be sayonara in real life too. But you know that’s not going to happen. The mission undertaken by these kids in adult bodies involves finding a jaguar statue that holds a gem with magical powers, and along the way Johnson’s Spencer acts dippy and awkward, even though his physical stature suggests he should be anything but. And Bethany’s Black explores the wonders of peeing like a man for the first time. None of these antics are particularly clever, but they’re not off-putting, either.

By the time Jumanji: Welcome to the Jungle resolves itself, you’ll be glad you’re not a kid—provided, of course, you’re not—and you’ll be even gladder you’re not an avatar. And almost immediately, you’ll have forgotten everything you just saw. That’s the true magic of Jumanji. 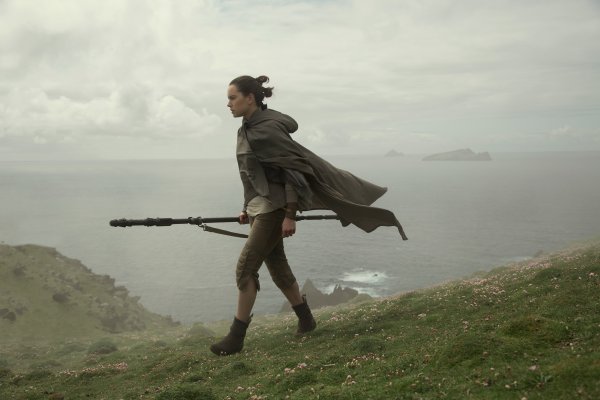 Everything We Learned About Rey's Parents in Star Wars: The Last Jedi
Next Up: Editor's Pick