Warning: This post contains spoilers for All the Money in the World

The crime thriller All the Money in the World, opening Christmas day though not exactly in the Christmas spirit, is filmmaker Ridley Scott’s spin on the true story of how billionaire oil tycoon J. Paul Getty (played in the film by Christopher Plummer, who replaced Kevin Spacey) begrudgingly paid ransom to the criminals who kidnapped his 16-year-old grandson J. Paul Getty III.

But what actually happened? Here’s how the real story compares to the movie:

How did the kidnapping happen?

The free-spirited teenager, who went by Paul, had been living in Rome as his father J. Paul “Eugene” Getty II oversaw the Italian side of the family business. He had reportedly been hitting on a Belgian go-go dancer in the Piazza Navona in Rome when he disappeared before dawn on July 10, 1973 — as the film’s opening scenes depict. What exactly happened remained a mystery, but his mother received the following note, which TIME published in the July 30, 1973, issue: “Dear Mother: I have fallen into the hands of kidnapers. Don’t let me be killed! Make sure that the police do not interfere. You must absolutely not take this as a joke…Don’t give publicity to my kidnaping.”

At first, though kidnappings were plaguing Italian society at the time, police and the boy’s friends didn’t believe he had been kidnapped. As that same TIME article reported, he was already hardly ever at the apartment he lived in with his mother, former actor Gail Getty Jeffries (played in the movie by Michelle Williams). His friends said he was always running out of cash and the boy even joked “about solving his financial problems by arranging his own ‘perfect kidnaping.'” In the movie, chatter about Paul’s having joked like this in the past puts a halt to the investigation until further evidence emerges to make authorities take it seriously.

The police realized there was no joke being played when the boy’s mother got a letter and two phone calls that seemed to be from one of the kidnappers, saying he would send her one of her son’s fingers. Ransom was set at $17 million — but, though the hostage’s grandfather was one of the world’s richest men at the time, he refused to pay.

Was Getty really that cheap?

TIME quoted the boy’s grandfather as saying that he opposed paying the kidnappers in principle, because it only encourages kidnapping as a criminal practice. (As he says in the film, he did have many other grandchildren who would have been susceptible to similar fates.) As the movie makes clear, he also had a reputation for keeping his fortune close, constantly looking for tax deductions and loopholes — but there was often a deeper story behind the anecdotes of his stinginess. Notably, while it’s true that he installed a British payphone at his country estate while it was being renovated, forcing his guests to pay for their own calls, he also removed it 18 months later once the work was completed.

This reputation preceded the kidnapping incident. For example, a 1958 TIME cover story that profiled Getty as ” probably the world’s richest private citizen” describes his frugality as follows:

Did the kidnappers really cut off their hostage’s ear?

The kidnappers got to work trying to force the family’s hand, as the story generated increasing publicity. One example not depicted in the movie: the Playboy-esque magazine Playmen paid $1,000 to publish nude photos of the red-haired, freckled-face boy, which had been taken before he disappeared.

As the Dec. 24, 1973, issue of TIME reported, “early in November, an envelope was delivered to the Rome daily Il Messaggero. It contained a lock of reddish hair and a severed human ear. ‘This is Paul’s first ear,’ read a typewritten note. ‘If within ten days the family still believes that this is a joke mounted by him, then the other ear will arrive. In other words, he will arrive in little bits.'”

Meanwhile, the young Getty’s mother had told her son’s kidnappers that she would look into negotiating a price, and (via a police-wiretapped a phone call) they eventually settled on $2,890,000.

The ear delivery was apparently the straw that broke the camel’s back for the boy’s grandfather — sort of. According to the New York Times’ review of John Pearson’s book on which the film is based, “He would pay the $2.2 million of the ransom that his accountants said was tax-deductible as a casualty loss under the tax code of the day, which limited such write-offs to 10 percent of one’s taxable income; the boy’s father would have to cover the rest, which he did by borrowing from his father at 4 percent interest.” The movie depicts a meeting between the elder Getty, his drug-addled son, Gail and a group of lawyers, in which Gail is incredulous at her father-in-law’s willingness to turn a life-or-death matter into a discussion about tax deductions.

How did the ordeal end?

About a month later, the magazine explained how the paying of the ransom actually helped nab the kidnappers. The family dispatched an American named Fletcher Chase (Mark Wahlberg) with sacks full of Italian lire, each note of which had been microfilmed by police, to deliver the ransom. As he followed the kidnappers’ instructions, driving south of Naples, the gang pulled up alongside him and he stopped the car. “While he was handing over the sacks of lire, a car driven by a Rome detective with a pretty blonde policewoman at his side halted near by. Pretending to be tourists taking pictures, they managed to get a close look at the suspected kidnapers,” TIME reported. “Once back in Rome, the police identified the Calabrians and then shadowed them for a month before making the arrests. Young Getty, on an Austrian ski vacation with his mother, volunteered to fly to Rome to identify the suspects.”

Nine of them were eventually arrested, the New York Times later reported, but there was only enough evidence to convict two.

The movie depicts these events rather differently, with Gail and Fletcher Chase, a former intelligence agent, delivering the money and collecting Paul themselves, after frantically searching for him in a small Italian village with the kidnappers closing in.

Though the case ended, Getty III never seemed quite able to move on. Within a year after he was kidnapped, he married a German photographer, and their son Balthazar (now an actor) was born in 1975. But he struggled with substance abuse and in 1981, had a stroke that left him paralyzed until his death in 2011.

What happened to J. Paul Getty?

Unlike in the movie, in which the oil tycoon appears to have a stroke and die the very same night that Paul is rescued, he actually passed away about three years after his grandson’s return, in 1976, at the age of 83. He died in a 72-room mansion near London, where, as People later reported, he had “isolated” himself with his German shepherds. The movie does depict him dying at his English estate, and in solitude, as well — he stumbles through the property, calling out for help, but no one is there to hear him.

And what about his estate?

At the time of his death, TIME’s obituary reported that most of his fortune, much of it kept in Getty Oil stock, would be given to charities and non-profits, including the Getty Museum. As the movie depicts, he owned many valuable things, such as works of art, many of which are now displayed in the museum.

But some of it did go to individuals. By the time he died, he had been married and divorced five times. Despite his miserly reputation, he was far from cheap when it came to spending money on women. The singer he married in 1939, Louise Lynch Getty of Santa Monica, Calif., received $55,000 a year for life from the trust, and 11 other women received payouts, “including a German countess, a French art dealer, Getty‘s Nicaraguan companion Rosabella Burch (she got $82,625 in Getty stock) and Lady Ursula d’Abo, a merry London widow who acted as hostess at his parties ($165,250 in stock),” TIME reported soon after his death. “The big winner, with $826,250 in stock plus $1,167 a month, was Penelope Ann Kitson, 53, a decorator who had known Getty since the 1950s but refused to marry him, said her ex-husband, because ‘she was not prepared to be trampled on like his other wives.'”

— With reporting by Eliza Berman 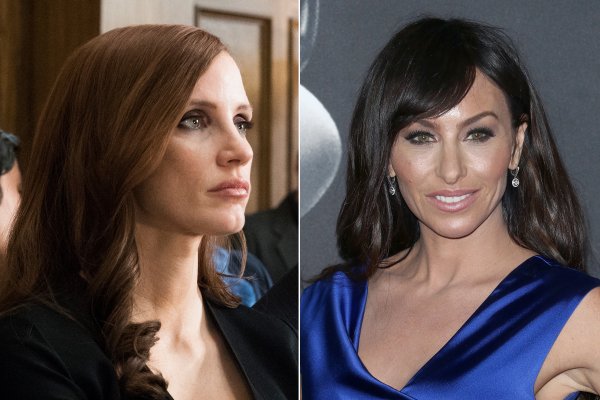 The True Story Behind the Movie Molly's Game
Next Up: Editor's Pick