Afghan women wait to cast their ballots at a polling station in Mazar-i-sharif April 5, 2014.
Zohra Bensemraz—Reuters
By Krista Mahr

Seven million Afghans braved security threats and inclement weather on Saturday to vote for their next president. Despite persistent intimidation and attacks by the Taliban in the weeks ahead of the April 5 polls, voter turnout was high in what many hope will be the war-torn nation’s first peaceful and democratic transition of power since 2001.

President Hamid Karzai, who has led Afghanistan since 2001 and is constitutionally barred from running again, cast his vote for his successor in the morning. Eight candidates are vying to take his place; the three frontrunners are Ashraf Ghani, Abdullah Abdullah, and Zalmai Rassoul. In such a wide field, the likelihood that one candidate will get the votes needed to win outright is slim. A runoff vote between the top candidates is widely expected, meaning that Afghanistan may not get its next government in place until the summer.

Officials and citizens’ central concerns as the presidential and provincial elections got underway were security and fraud. The Taliban had vowed to disrupt the vote, and ran a campaign of high-profile attacks in Kabul and other parts of the country in recent weeks. The day before voting started, two female foreign journalists traveling with election workers were attacked by an Afghan police officer in eastern Khost province. Anja Niedringhaus, a Pulitzer-prize-winning photographer working for the Associated Press, was shot and killed.

Afghan forces were dispatched in a massive operation across the nation to protect voters. Much of Kabul was reportedly blocked off to traffic, and in less stable parts of the country, the election commission closed hundreds of polling centers before the vote, in no small part to prevent ballot stuffing in places where voters and observers would be largely absent. After the 2009 presidential election, some 1.5 million votes were disqualified, according to the election commission. Karzai remained in power, but such widespread fraud this time around could lead to a protracted power struggle in a larger field of candidates.

Over the course of the day, a sense of euphoria built on social media as photos poured in of long lines of voters waiting to cast their ballots and proudly showing off their ink-stained fingers after their turn. A total of seven million out of 12 million eligible voters, or 58 percent showed up to vote, despite the Taliban’s threats, Al Jazeera reports. There were scattered bombings and attacks throughout the country and several deaths were reported, but the violence was less intense than expected.

“On behalf of the American people, I congratulate the millions of Afghans who enthusiastically participated in today’s historic elections,” said President Barack Obama in a statement. “These elections are critical to securing Afghanistan’s democratic future.”

There were reports Saturday that some polling centers had run out of ballots — a better problem to have than widespread violence, but also one that underscores the work still ahead in this historic transition for Afghanistan. Today’s enthusiastic and inspiring vote was a good start. 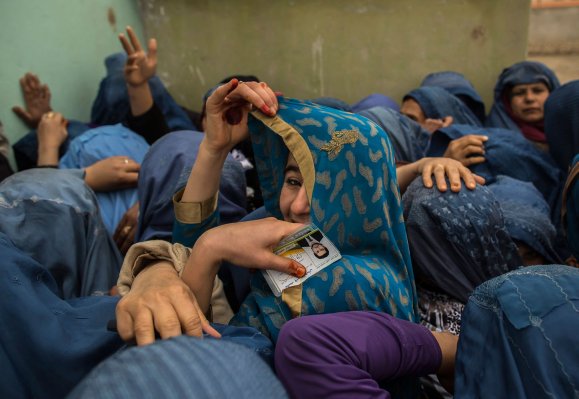