You Asked: Will Earbuds Ruin My Hearing?

About 48 million Americans have problems hearing, and 20% of children have permanent hearing loss caused mostly by loud-noise exposure, according to statistics from the non-profit Hearing Health Foundation.

Considering how many people walk around sporting phone-connected earbuds, it’s natural to wonder whether those little white devices—nestled so close to the eardrums—might be contributing to widespread hearing issues.

“You can certainly hurt your hearing listening to loud music, whether through earbuds or something else,” says Dr. Robert A. Dobie, a clinical professor of otolaryngology at the University of Texas Health Science Center at San Antonio. “But earbuds and listening to music with earbuds are not a major cause of hearing loss.”

Dobie points out that headphones and bud-like listening apparatuses are nothing new. Back in the 1980s and 90s, plenty of people rocked out wearing the buds that came with their Sony Walkmans and other portable music players. There’s no evidence hearing loss has spiked since then. In fact, one of Doby’s studies found that rates of hearing loss have recently fallen among U.S. adults.

That’s not to say earbuds are always safe.

If you play music loudly enough, you can damage your hearing, Dobie says. But other common loud-noise exposures are much more likely to hurt your ears. “A lot more kids lose hearing from recreational shooting or hunting than from loud music,” he says, citing research linking firearms to hearing issues.

So how loud is too loud when it comes to your earbuds? That’s trickier.

For one thing, some people have tough ears while others have tender ears, says M. Charles Liberman, a professor of otolaryngology at Harvard Medical School and director of the Eaton-Peabody Laboratories at Massachusetts Eye and Ear. An earbud volume that might lead to hearing loss in your friend could be safe for you, based solely on individual differences.

But when you pull out your buds, if you hear ringing in your ears—or the world around you sounds a little muffled—that’s a sure sign that you need to turn down the volume. Even if your hearing quickly returns to normal, you may be doing lasting damage to your ears, Liberman says.

For the past few years, he and others have found evidence of a phenomenon known as “hidden hearing loss.” It’s called “hidden” because it’s not detectable by traditional methods.

Liberman describes the classic hearing tests that involve wearing headphones and listening for subtle beeps and tones in a silent environment. While accurate at detecting some forms of loss, those tests don’t pick up on the kind of hearing issues that make it hard for a person to hear a friend’s voice in a crowded restaurant.

“It turns out that you can lose literally 80 to 90% of the nerve fibers in your ear, and it doesn’t change your threshold detection,” he explains. In other words, you can severely impair your hearing and still do well on those classic hearing tests.

Basically, the way researchers have assessed hearing loss for decades is flawed, he says. Even if your hearing seems to go back to normal after exposure to something loud—whether it’s a jackhammer, a gunshot or music—lasting damage may have been done.

If you want to protect your hearing while wearing earbuds, Dobie says the situations that should worry you most are those when you’re in a loud place—on a commuter train, say, or in a crowded cafeteria—and you turn up the volume to block out background noise.

Noise-cancelling headphones and earbuds may help shield your ears from a lot of that ambient noise—and so allow you to listen at a lower volume. “But then you have to be more aware of your surroundings if you’re driving or walking,” Dobie says. (The rate of pedestrian deaths—likely caused by phone-based distraction—has surged since 2009, according to the Governors Highway Safety Association.)

But assuming you’re not blasting music every time you put in your earbuds, you probably don’t have to worry about them ruining your hearing. “There’s been a lot of hysteria about this,” Dobie says of earbuds. “But there’s not much evidence that they offer any unique risks.” 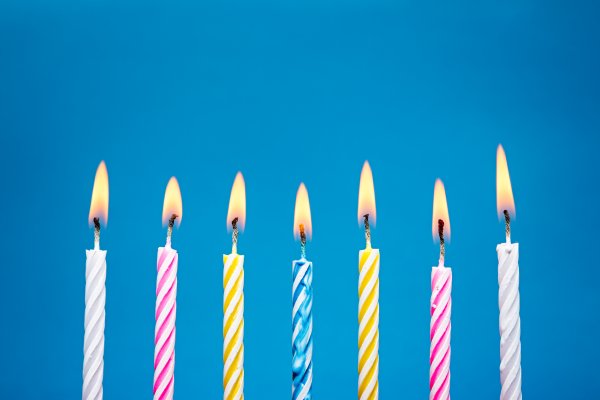 People Who Live to 100 Have These Traits in Common
Next Up: Editor's Pick