Russel Stover is enjoying a sweet reunion with a bear statue that was stolen from its grounds more than a year ago.

The statue of a teddy bear being doused with chocolate was stolen from the exterior of Russell Stover’s Abilene, Kan., factory in early November of last year. While the case of sticky fingers was initially investigated, “This had become a running joke,” Abilene Police Department Assistant Chief Jason Wilkins told the Wichita Eagle. “We followed several leads and it never worked out, so we are extremely pleased to return it.”

Officials reportedly got a tip from a citizen not involved in the crime on Wednesday. When they followed the lead, according to the Eagle, they discovered the 150-pound bear, still in good condition, in a Salina garage.

The Abilene Police Department posted a photo of the recovered statue on Facebook Wednesday, to great excitement—and calls for all the juicy details—from the community. “All us [Russell Stover] employees are thrilled,” one commenter wrote. “Missed it so much it was family.” 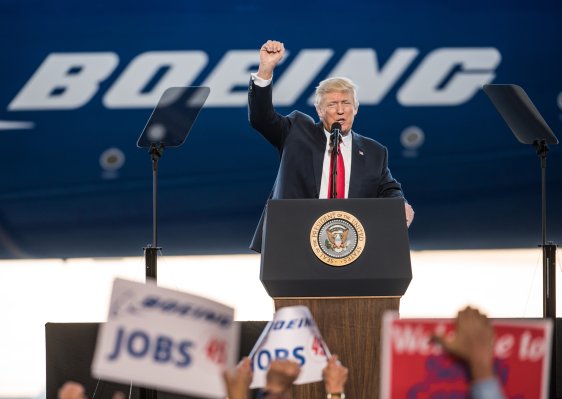 Trump Administration Will Prevent Spouses of Skilled Immigrants From Finding Jobs In U.S.
Next Up: Editor's Pick