The Head of the U.N. Voices Concern Over Myanmar's Violations of Human Rights

(TOKYO/YANGON) – The arrest of two Reuters journalists in Yangon this week was a signal that press freedom is shrinking in Myanmar and the international community must do all it can to get them released, U.N. Secretary-General Antonio Guterres said on Thursday.

Guterres said his main concern over Myanmar was the “dramatic violations of human rights” during a military crackdown in Rakhine State that forced more than 600,000 Rohingya Muslims to flee the country for southern Bangladesh, and the arrest of the journalists was probably related.

“It is clearly a concern in relation to the erosion of press freedom in the country,” he told a news conference in Tokyo, referring to the detention of Wa Lone and Kyaw Soe Oo, who had been working on stories about the strife in Rakhine State.

“And probably the reason why these journalists were arrested is because they were reporting on what they have seen in relation to this massive human tragedy,” he added.

Myanmar’s Ministry of Information said in a statement on Wednesday that the Reuters journalists and two policemen faced charges under the British colonial-era Official Secrets Act. The 1923 law carries a maximum prison sentence of 14 years.

The reporters “illegally acquired information with the intention to share it with foreign media”, the ministry said in its statement, which was accompanied by a photo of the two reporters in handcuffs.

Rohingya refugees in Bangladesh say their exodus from the mainly Buddhist nation was triggered by a military offensive in response to Rohingya militant attacks on security forces at the end of August.

The United Nations has branded the military’s campaign in Rakhine State “a textbook example of ethnic cleansing” of the minority Rohingya.

Guterres said the international community should do everything possible to secure the journalists’ release and freedom of the press in Myanmar.

He called for aid to be delivered, violence contained and reconciliation promoted in Rakhine State, and for the Rohingyas’ right of return to be fully respected and implemented.

Britain has expressed “grave concerns” to the government of Myanmar over the arrest of the two journalists, Foreign Secretary Boris Johnson told reporters in London on Thursday.

“We are committed to freedom of speech and people’s ability to report the facts and bring into the public domain what is happening in Rakhine state,” he said.

Canada’s Minister of Foreign Affairs Chrystia Freeland tweeted that she was “deeply concerned” by the reports about the arrests. “Freedom of the press is essential for democracy and must be preserved,” she said.

And the president of the European Parliament Antonio Tajani also called on Myanmar to protect media freedoms and release the two.

Wa Lone and Kyaw Soe Oo went missing on Tuesday evening after they had been invited to meet police officials over dinner on the outskirts of Yangon.

Reuters journalist Wa Lone is seen at the Reuters office in this undated photo in Yangon, Myanmar.
Reuters Staff—REUTERS

The authorities have not confirmed where the journalists are being held and, as of Thursday evening, Reuters had not been formally contacted by officials about their detention.

At Htaunt Kyant police station, where the journalists were charged, family members of Wa Lone and Kyaw Soe Oo were told that the pair were being detained at another location by an investigative team.

“They are not here,” said Police Second Lieutenant Tin Htway Oo, according to Pann Ei, wife of reporter Wa Lone. “The police investigation team took them soon after they were arrested.”

He said he did not know where the journalists were, Pann Ei added, but he did tell her they would be brought back to the station in “two to three days at most.”

Reuters could not immediately reach Tin Htway Oo for comment.

Police Lieutenant Colonel Myint Htwe of the Yangon Police Division told Reuters the reporters’ location would not be disclosed until the investigation was complete.

“It will be known later. Please wait a while,” he said.

Reuters President and Editor-in-Chief Stephen J. Adler said in a statement on Wednesday: “We are outraged by this blatant attack on press freedom. We call for authorities to release them immediately.”

The Foreign Correspondents Club of Myanmar said it was “appalled” by the arrests and “gravely concerned” about the state of press freedom in the country. In a statement, it called on the authorities to ensure the safety of the reporters and allow their families to see them.

The foreign correspondents’ club in neighbouring Thailand said it was “alarmed by the use of this draconian law with its heavy penalties against journalists simply doing their jobs”.

“Wielding such a blunt legal instrument has an intimidating effect on other journalists, and poses a real threat to media freedom,” the Bangkok-based club said in a statement, calling for the journalists to be released. 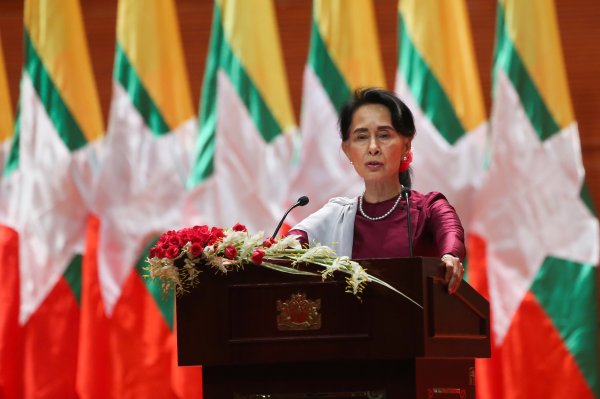