Democrats Are Excited by Doug Jones' Win. But They Still Face a Tough Fight Next Year

After Doug Jones’ unexpected win in the Alabama Senate race Tuesday night, jubilant Democrats could hardly contain their enthusiasm about what it means for next year’s midterm elections.

The upset win in deeply conservative Alabama, which hasn’t had a Democratic senator in two decades, reduced the Republican majority in the upper chamber to 51 while also showing that Democrats could compete in states they haven’t done well in recently.

“Senate Republicans are rushing to duck responsibility and blame all of their problems on Roy Moore,” the Democratic Senatorial Campaign Committee wrote in a memo Thursday. “But make no mistake: the same trends that our counterparts want to gloss over are emerging in Senate races across the country.”

But the optimism masks a tough reality, at least in the Senate. In 2018, Democrats will be defending 26 seats, including two independents who caucus with them. Ten of those seats are in states President Trump won in 2016, and five are in states where he won by over 15 percentage points. Republicans, on the other hand, are only defending eight seats.

Republicans have seized on this dynamic, targeting Missouri and Indiana, state where President Donald Trump won handily last year and Sens. Claire McCaskill and Joe Donnelly are running for reelection, as two of the most optimal opportunities to turn the Senate seats red. On visits to tout his tax reform plan, President Trump specifically called out McCaskill and Donnelly, telling the crowds to vote them out of office if they don’t support the plan. Neither of them have.

In order for Democrats to take control, they’ll need to push back hard against these forces, keeping all of their seats in contention and flip an additional two.

“Obviously, Senate Democrats face a very challenging map, but Republicans are facing expensive and divisive primaries and an electorate that is repulsed by their agenda,” said an aide to the Democratic Senatorial Campaign Committee. “We are running with strong incumbents and challengers, and are preparing to take advantage of every opportunity we can.”

Chris Pack, a spokesman for the Senate Majority Fund, a SuperPac aligned with Senate Majority Leader Mitch McConnell, told TIME that while the environment was undeniably tough for Republicans, the electoral map gives the party an advantage.

“It’s such a great map for us this cycle; I don’t think it’s been this favorable to Republicans when you have the president and the same party [in control of the Senate] in decades,” he said. “It will be a tough climate but the map is so favorable.”

There is also the possibility that Republicans become even more energized following Jones’ victory. Some of the most potentially competitive races, like Arizona and Nevada, include insurgent primary challengers — Kelli Ward in Arizona and Danny Tarkanian in Nevada — who are backed by Steve Bannon and embody the populist conservative grassroots movement, similar to Alabama’s Republican candidate, Roy Moore. It is likely that Republicans will go into overdrive to ensure more centrist candidates prevail in the primaries.

Although the Senate Leadership Fund has yet to detail its strategy, it has already released an ad blasting Ward and slammed Tarkanian on Twitter after he challenged Heller to sign a pledge replacing McConnell as Senate Majority Leader.

“We will play in primaries because we think it’s important to get candidates through their primaries who can win in November when it counts,” said Pack. 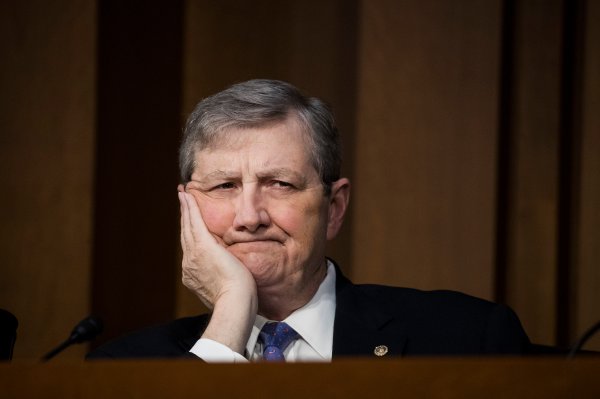 A Trump Judicial Nominee Couldn't Answer Basic Questions About The Law
Next Up: Editor's Pick