11 of the Most Fascinating Obituaries From 2017

Throughout the year TIME covers notable deaths in print and online, remembering the achievements of the people who have shaped history — but many people whose lives are likewise notable, but whose names are less famous, have also changed history. They’re not quite global celebrities, but they were unquestionably significant. They were activists, scientists, spies; they led lives full of intrigue or rooted in a deep sense of place. The stories of their lives made us look twice and want to know more.

Here are 11 stories of the fascinating lives lost in 2017:

Cornelia Bailey: Champion of the African-rooted Geechee-Gullah culture, she fought to preserve the distinctive community, descended from slaves, on the isolated Sapelo island off Georgia. Having grown up on the island when its population was already shrinking, she developed a connection to her family’s past and later worked to keep land within families, spread awareness about the island and its unique culture, and to keep its dwindling way of life going. She wrote, “We don’t want to lose the meaning of what a lot of gnats mean, how fresh-dug sweet potatoes taste cooked in hot ashes. I am Sapelo and all the hundreds of others who are descendants; we who remain here is Sapelo. We are one, bound by the spirit of an island and Bulallah the slave. Bound by high tide, fields, gossips, smoke mullet, and our faith. And I musn’t forget we are all surrounded by big water and have to be close to each other, real close!”

Dennis Banks: A co-founder of the American Indian Movement, he helped lead the 6-day takeover of the Bureau of Indian Affairs in 1972, and was a leader of the 71-day Wounded Knee occupation in 1973. Banks, of the Ojibwe and Turtle Clan, was born and lived in Leech Lake Reservation, Minn. Sometimes criticized as a self-promoter, he was an activist and later drug and alcohol counselor, had a wild rice and maple syrup company, and fought to protect native grave sites and for repatriation. (Other indigenous activists who died this year included Eddie Sartuche, spiritual leader and one of the last speakers of Wuksachi, and Arthur Manuel, a First Nations leader and indigenous activist in Canada.)

Mildred Dresselhaus: The “queen of carbon” was the first full tenured female professor at MIT. A physicist, she studied carbon and its electrical properties in all forms. She did pioneering work in nanomaterials, including devising the idea that single layer of carbon atoms could be rolled into a tiny tube that would be incredibly strong and equally minute. She also worked to support other women in the scientific community, organizing MIT’s first Women’s Forum in 1971. Born in Brooklyn, she grew up in the Bronx and when at Hunter College took a physics class with future Nobel winner Rosalyn Yalow, who encouraged her to study science. One of her granddaughters recalled how she always had the first car in the lot at MIT. Dresselhaus was awarded the Presidential Medal of Freedom and National Medal of Science, and was the first woman to win that one for Engineering. (Other pioneering women of science who passed away this year included Lilli Hornig, chemist whose family left Berlin for the U.S. when Hitler rose to power and worked at Los Alamos; Isabella Karle, a crystallographer who helped determine the structure of molecules and had worked on the Manhattan Project; and Marian Diamond, a neuroscientist who studied Albert Einstein’s brain.)

Lloyd Cotsen: Though Cotsen made his fortune as the chief executive at Neutrogena, he was also an avid collector. For example, he collected over 100,000 books of children’s literature, which were donated to Princeton University. Cotsen was already amassing matchbooks, stamps and baseball cards as a child. In a life marked by tragedy — his wife and one of his children, along with a house guest, were murdered at their Beverly Hills house in 1979 while he was on a business trip — his collections were a constant. “I’m not really a collector,” he told the Denver Post in 1998. “I’m an accumulator. I buy things because they strike an emotional bell, they appeal to my curiosity, to the thrill of discovery of the extraordinary in the ordinary.”

Aileen Hernandez: When President Lyndon B. Johnson put her on the Equal Employment Opportunity Council, Hernandez was the only woman on the newly formed commission. Incensed by inaction on sex-discrimination, she left after less than two years. In 1970 she became the second head of National Organization for Women and the first African-American woman to head the organization. In that role, she led the Women’s Strike for Equality and fought to make sure women of color and poor and working-class women weren’t left out of the feminist movement — work she continued throughout her life. (Other feminist trailblazers who died this year included Roxcy Bolton, who successfully fought to end the practice of given all hurricanes feminine names and started the U.S.’s first rape treatment center; Sheila Michaels, who campaigned for women to have the option of being called Ms.; and Linda Nochlin, who in 1971 wrote an article that opened the art world to feminist analysis.)

Sylvia Moy: A Motown songwriter and producer, she collaborated with Stevie Wonder and their hits helped make him a star. She’d gone to New York for singing auditions after graduating high school, but nothing worked out and she returned to Detroit, where Marvin Gaye and Mickey Stevenson discovered her at a club in 1963, and signed her to a contract for songwriting, management and recording. At the time, after his initial success as a 13-year-old prodigy, Stevie Wonder was having trouble, with Motown considering dropping him as an artist. Moy begged to work with him, and working as a team with a third writer they wrote “Uptight (Everything’s Alright),” which quickly became a hit. They continued to work together, creating hits like “My Cherie Amour” and “I Was Made to Love Her.” In 2006, when she was inducted into the Songwriters Hall of Fame, Wonder gave a surprise performance.

Shobha Nehru: A Jewish-Hungarian woman, she studied in England in the 1930s, where she met her husband at the London School of Economics, married into India’s political elite and so avoided the Holocaust. Her wealthy, assimilated Jewish family in Budapest and her husband’s family were both skeptical of the match. During the partition of India and Pakistan, she helped start a shop to sell work by refugee women. It became part of a network, the Central Cottage Industries Emporium. Her husband was India’s ambassador to the U.S., among other high level positions, affording her access to power. For example, when Prime Minister Indira Gandhi declared a state of emergency in 1975, Nehru spoke up to her friend Gandhi about the civil rights abuse of a coercive mass sterilization campaign.

Jeannie Rousseau de Clarens: A World War II-era spy, she passed information about German rocketry projects to the British and survived stints in three concentration camps. When the war broke out she was 20, and her family evacuated Paris to Brittany where her father volunteered her as a liaison, given her fluent German. Later, when she got a job translating for French industrialists, which brought her into contact with the German military, a run-in with a university acquaintance who was building the French Resistance’s intelligence network led her to work them them, assuming the codename Amniarix. Her intelligence gathering led to a raid that delayed the German V-1 and V-2 long-range bomb projects. The British planned to evacuate her before D-Day for debriefing, but she was caught by the Gestapo. It was after liberation from a labor camp, while convalescing, that she met her husband, who was also recovering after being imprisoned. Later asked why she did it she said, “Because I was there. Period. And because I was very young.” And she added: “Resistance is a state of mind, we can exercise it at any moment.” (Other women who proved their mettle in WWII and died this year include Joy Lofthouse, pilot in the Air Transport Auxiliary; Micheline Dumon, member of the Belgian Resistance; and Aline Griffith, who worked for the CIA-precursor Office of Strategic Services during the war.)

Joseph Schmitt: A spacesuit technician, he was the last person to see astronauts before launch, ensuring their gear was properly connected and secured. He got his start in the 1930s in the Army Air Corps, where he took an aircraft clothing repair course, and when he left the Army in 1939 he went to the National Advisory Committee for Aeronautics, a NASA precursor. He was there for the agency’s biggest moments, from breaking the sound barrier to the moon landing. He even vacuumed up the moon dust after Apollo 11 returned. His role was preserved for posterity by Norman Rockwell, too: When the artist painted astronauts, Schmitt brought the spacesuits to Stockbridge, Mass. so Rockwell could paint them from life, and Rockwell included Schmitt in the paintings. (Another space pioneer who died this year was U.R. Rao, who chaired India’s space-research organization.)

Sumiteru Taniguchi: As a teen, Taniguchi survived the atomic bombing of Nagasaki, and, after a grueling recovery period, turned his burn scars into testimony as he advocated for disarmament. He was delivering mail by bike when the bomb detonated at 11:02 a.m. on August 9, 1945, initially killing an estimated 40,000. In 1946, the U.S. Strategic Bombing Survey recorded a few minutes of video of him undergoing treatment. He spoke out about his and others’ experiences, attended memorial ceremonies and traveled around the world to argue for an end to nuclear arms. “I am worried about what will happen to the world,” he said, “when there are no more atomic bomb survivors.”

Olive Yang: The Burmese opium smuggler struggled with traditional gender norms and escaped them by becoming a warlord. One of 11 children born to the ethnic Chinese hereditary royal ruler of the Kokang region, Yang fled to China during WWII. She had a son but no interest in marriage and in her early 20s was already described as “manly-hearted” and with “at least one pistol at her hip,” she commanded hundreds of men. She developed opium trade routes that made Myanmar the second-largest producer of opium in the world. When her brother abdicated, she took over his former army. She spent years in prison, courted the Burmese actress Wah Wah Win Shwe, and was recruited to help broker a peace deal in her country in 1989, among other exploits. 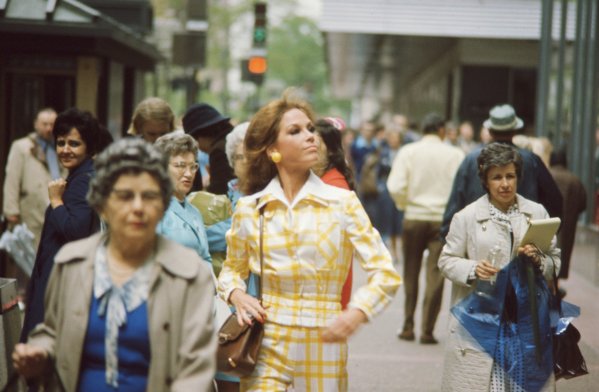 In Memoriam 2017: How 11 Notable People Were Remembered This Year
Next Up: Editor's Pick