The Arctic is melting with no turning back. Climate change increased rainfall during Hurricane Harvey by at least 15%. And several extreme weather events that occurred in 2016 would not have been possible without man-made global warming.

These are among the findings being discussed this week at this fall’s meeting of the American Geophysical Union in New Orleans, the largest gathering of Earth scientists in the world. Taken together, the findings show the deepening urgency of the fight against climate change.

“Climate change is hurting us without a doubt,” said James Byrne, a professor at the University of Lethbridge who studies climate change, at a press conference. “Houston, India, Bangladesh, Nepal, British Columbia — worst fire season ever. California, I think they declared it the worst fire season.”

Scientists have explored the link between climate change and extreme weather events for years, but many of the conclusions have relied on forecasts of potential future damage. This year, scientists say, the findings are no longer theoretical. Man-made global warming is causing problems here and now.

Take the American Meteorological Society’s report on extreme weather events in 2016, the sixth annual iteration of the report. In the past, the group found that likelihood had increased the chances of certain extreme weather events. But this year scientists found that 2016’s record global temperatures and historic warm waters in the Bering Sea “would not have been possible” in a world without human-caused climate change.

“These events were not just influenced by human-caused climate change,” said Jeff Rosenfeld of the American Meteorological Society at a press conference. “Some of the events in 2016 could not have happened without climate change.”

The report also highlighted global heat waves, an extreme occurence of El Niño and bleaching of coral reefs. These extreme events are all closely tied to climate change, though they remain theoretically possible in a world without the phenomenon.

Another report from the National Oceanic and Atmospheric Administration found that the state of continued ice melt, loss of snow cover and warm temperatures will be the “new normal” in the Arctic. The signs of climate change in the region have been pronounced for years as air temperatures have risen there at twice the rate as they have globally.

The effects of a melting Arctic — and the strong likelihood that it will not return to a normal state anytime soon — has significant implications far beyond its boundaries. Arctic sea ice plays an important role moderating global temperatures as it reflects sunlight back into space. And scientists say that the swift warming in the Arctic is a concerning sign of what’s to come globally. “Unlike Vegas what happens in the Arctic doesn’t stay in the Arctic,” said Tim Gallaudet, acting NOAA administrator, at a press conference. “It affects the rest of the planet.”

Two separate studies presented at the conference showed that climate change worsened rainfall when Hurricane Harvey struck Houston earlier by somewhere between 15% and 38%. That storm brought nearly 50 inches of rain to some areas and caused billions in damages. The research comes as scientists increasingly try to draw explicit conclusions about the effect of climate change and individual storms, a practice unthinkable just a decade ago.

The warning from scientists comes as policymakers across the globe continue to grapple how to stem temperature rise. Countries have committed to trying to keep temperatures from rising more than 2 degrees Celsius (or 3.6 degrees Fahrenheit) by 2100, but recent research shows leaders remain far from meeting that goal. 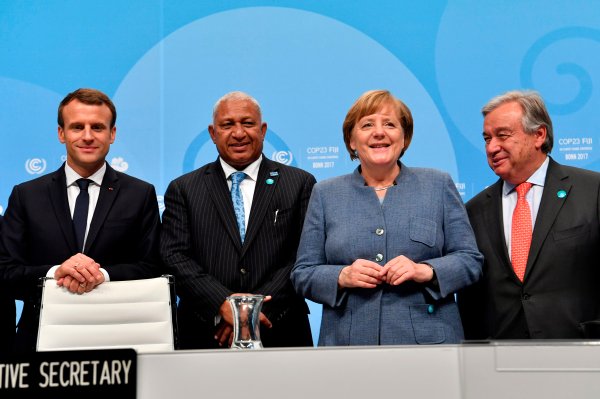