Trump Promised a 'Giant Tax Cut for Christmas.' It May Come Even Earlier

President Trump has promised that Washington will be giving Americans “a giant tax cut for Christmas,” and it looks like lawmakers are on track to meet the holiday deadline.

Republicans in the House and Senate reached an agreement this week on how to reconcile their two tax reform bills, which have been hurtled through Congress at startling speed over the last month. The final product will arguably amount to the most substantial overhaul of the American tax code since the Reagan years, fulfilling a legislative priority of a GOP-led Congress that has failed to notch any significant policy victories this year.

The compromise between the two houses will bring the corporate tax rate to 21% from its current 35%, and cap the top tax rate for individuals at 37%, Politico reported, citing individuals familiar with the negotiations. Contrary to initial goals, the bill will not do away with the provision that allows individuals to deduct their state and local tax charges from their federal tax bill; instead, they can choose between that provision or a property tax deduction, which in either case would be capped at $10,000.

Democrats are furious, noting that from the start the drafting of the tax reform effort has been carried out hastily and almost exclusively behind the G.O.P.’s closed doors. “They set up their ‘Gang of Six’ and worked with the White House and never included Democratic input,” one senior Democratic aide tells TIME, referring to the six Republican leaders on the Hill and in the White House who led the charge on the tax bill. “There was never any serious outreach.”

“So let’s understand what’s happening today is a sham,” Sen. Ron Wyden, the Oregon Democrat who sits as the ranking member on the Senate Finance Committee, said on Wednesday, when the congressional committee convened its one public meeting to reconcile the House and Senate bills. “Nobody ought to mistake this conference for real debate, not when Republicans and special interests lobbyists have already wrapped up the real talks in secret.”

“There’s not been a lot of bipartisan work,” Sen. Jeanne Shaheen, a New Hampshire Democrat, said more gently. “There’s a consensus that tax reform is long overdue, but we need tax reform that simplifies the tax code and helps the middle class… [this] is a partisan tax bill written in secret without public hearings that increases the national debt.”

The upset victory of Democrat Doug Jones in Alabama’s special Senate election on Tuesday has only expedited the Republican push to finish tax reform. When Jones arrives in Washington the G.O.P.’s slim margin in the Senate will get slimmer — they will hold just 51 of 100 seats — and Republican leadership is anxious to hold a vote on the bill before that happens.

That vote is scheduled to happen sometime next week. This will leave just several days for Congress to pass a spending package to stave off a government shutdown immediately ahead of the Christmas holiday. 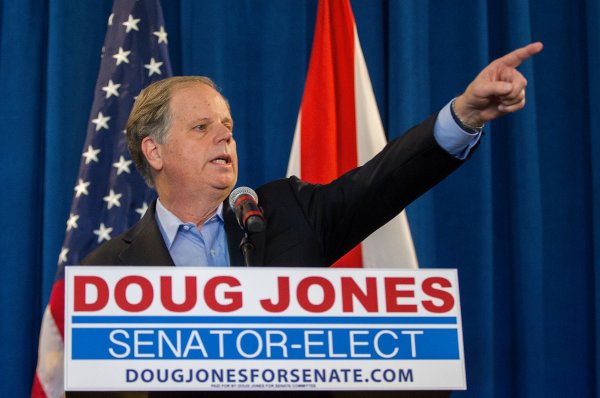