DNA Testing Kits Are on Everyone's Holiday List. 5 Things to Know If You Get One

Genetic testing kits you can do at home seem to be on many holiday wish lists this year; one even landed on Oprah’s list of favorite things. The affordable kits, like those from 23andMe and ancestry.com, can scan your genes from a spit sample. But it’s important to know what they can and cannot do when it comes to teaching you about your medical well-being. Here are five things to know—before you ship off your saliva—if you get a genetic testing kit for the holidays.

You won’t find out everything about your genes

Most genetic testing companies don’t actually sequence all three billion base pairs of your entire DNA. They generally focus on certain sections where there is stronger information about what genetic changes mean.

Any type of genetic testing, from the consumer-based kits that anyone can buy to the versions that doctors order, can only glean so much information from your DNA. Medical conditions like cancer and heart disease are complex and not likely to be traced to a single aberration in DNA.

However, there are some genetic variants that do link to a stronger chance for certain conditions. In those cases, having the genetic change doesn’t ensure that you will develop the condition, but could mean that you have a higher chance of getting the disease. Because of such uncertainty, in 2015 the Food and Drug Administration (FDA) limited consumer genetic testing kits to testing only for genetic variants that have strong evidence linking them to disease. The first was a change linked to a rare disease called Bloom syndrome, which can increase the risk of cancer, among other things. The company now gives people the option of testing for genetic variants that can put them at higher risk of developing disease like Alzheimer’s and Parkinson’s, for which there aren’t reliable treatments.

Even if the testing finds a variant linked to the disease, it doesn’t mean that the person will absolutely develop that disease. And conversely, if the test if negative for the mutations, it doesn’t necessarily mean that they won’t develop that condition. It’s worth remembering that doctors are far from knowing everything that the genome can tell us. Even if they find that some genetic changes are associated with disease, they don’t know if those changes are the only ones needed to cause illness, or if others are involved. “We are in a steep curve of learning about the genome now,” says Michael Watson, executive director of the American College of Medical Genetics. “We’re hampered by not having a lot of data on a lot of different populations and conditions.”

You’ll learn more about where you came from

Much of the appeal of getting your DNA sequenced is learning about how much of your genome you share with people from all over the world. It is possible to discover a surprise Scottish heritage, for example, or even that you’re related to George Washington.

Genetic sequencing is particularly good at this, since it can find common DNA denominators among people of different racial and ethnic origins. Some people have even used genetic ancestry testing to find biological parents or lost relatives.

Your DNA may not be as private as you think

You will also be asked what you want the company to do with your saliva sample. You can ask the company to destroy it after they sequence your DNA, but your DNA will still be part of their database. You can also ask them to store the sample; some companies offer this option so they can re-sequence your genes when new information about interesting mutations becomes available.

Your DNA isn’t your destiny

For the most part, your genes contribute to—but don’t define—who you are.

Your genes may shape your personality, athleticism or outlook, but it’s often the combination of genes, your experiences and what you are exposed to that ultimately determine your physical and psychological state.

If you want to learn from your DNA, share your test results with a doctor who is knowledgeable about both genetics and the disease that you’re interested in. “Genetic information at the moment is very unstable, in the sense that we are still trying to build out our understanding of what the likelihood of getting a disease may be if you have a genetic variant,” says Watson. “So until we have that, you have to be pretty well educated in the disease and in genetics to interpret those results.”

Correction: The original version of this story incorrectly described George Washington’s family. He had no known biological children, so while he does have relatives who are alive today, he does not have any known direct descendants. 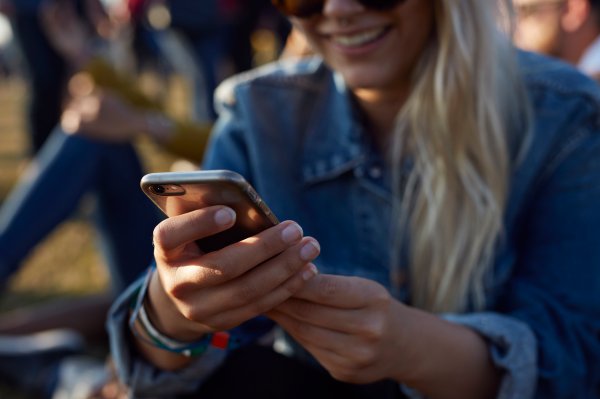 Officials Warn Cell Phone Radiation May Be Dangerous
Next Up: Editor's Pick