'I'm Not Going to Be Silenced.' Sen. Kirsten Gillibrand Speaks Out After President Trump's 'Sexist Smear'

Kirsten Gillibrand, the Democrat senator from New York, slammed President Donald Trump over the “sexist smear” he controversially tweeted at her on Tuesday.

On Wednesday, Gillibrand appeared on the Today Show to discuss the exchange and doubled down on her call for Trump to resign over sexual misconduct allegations just as several Congress members have done in recent weeks.

“Certainly that’s how I and many people read it and it was certainly just a sexist smear intended to silence me,” Gillibrand said to host Savannah Guthrie when asked if she felt Trump’s comments at her had sexual overtones.

“I’m not going to be silenced on this issue,” Gillibrand continued. “I’ve heard the testimony of many women, of numerous accusers, I believe them, and he should resign for that. I think Congress should do an investigation because we need accountability.”

Trump’s calling out of Gillibrand came a day after the Senator said that he should resign from the presidency. “President Trump has committed assault, according to these women, and those are very credible allegations of misconduct and criminal activity, and he should be fully investigated and he should resign,” she told CNN Monday.

Gillibrand’s remarks on the Today Show came hours after the Alabama Senate election was called for the Democrat Doug Jones, who in a stunning victory defeated Republican challenger Roy Moore in the wake of sexual harassment accusations of his own.

“I think this was an election about what we feel, and our values, and what we care about, and I think President Trump is wrong,”Gillibrand said on Today. “He is a bully, and he’s been attacking different people across this country since he’s been president.” 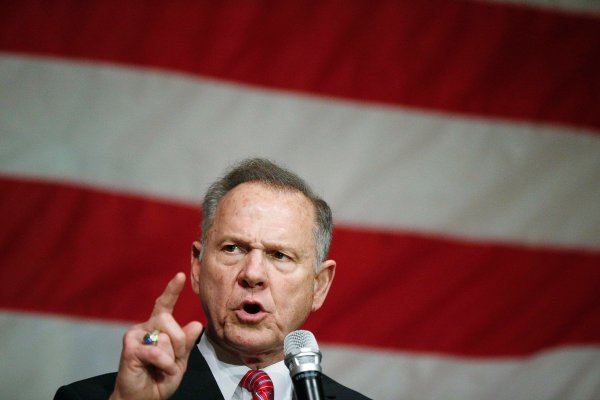 Congresswoman: Roy Moore Poses 'Threat to the Safety' of Teenage Pages at the Senate
Next Up: Editor's Pick