Afghanistan Goes To The Polls

Afghan women wait to cast their ballots at a polling station in Mazar-i-sharif April 5, 2014.
Zohra Bensemraz—Reuters
By Sam Frizell

Afghan voters braved cold, rain, and the threat of violence by the Taliban to cast their ballots Saturday, lining up at the polls in strong numbers to democratically transfer power for the first time in the country’s history.

There were few reports of violence Saturday, though a roadside bomb killed two policeman returning from a polling station in southern city of Qalat, and four voters were wounded in an explosion at a polling center in a southeastern province, Reuters reports. The Taliban had vowed to derail the elections, calling it a U.S.-manipulated sham.

The United Nations and other foreign donors funded the $100 million election, reports the New York Times.

About 12 million Afghans are eligible to vote in the election for eight candidates. The election is expected to end in a runoff with three leading candidates divvying up the vote.

More than 350,000 Afghan troops were mobilized to protect polling stations and voters, who formed long lines to cast their ballots across the country. Relatively few polling stations were closed under threat of violence.

Afghans had voted previously to elect current president Hamid Karzai in 2004 and re-elect him in a messy 2009 election that occurred amidst massive fraud, but Saturday’s vote is the first to elect a new president in the country’s history. 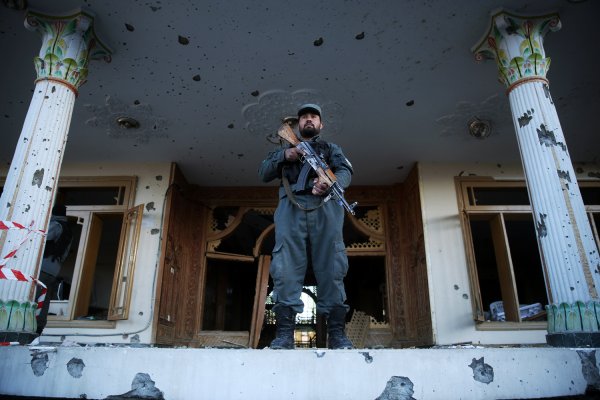 Two Journalists Shot in Afghanistan Ahead of Vote
Next Up: Editor's Pick