“Homosexuality is a sin in the biblical sense, that is where Roy Moore is in the state of Alabama,” Ted Crockett told CNN’s Jake Tapper.

When Tapper asked if Moore believed the Christian Bible should determine United States law, Crockett responded that the country was founded on the Old and New Testaments — even though there is a separation of church and state in the country, which Tapper immediately noted.

When Tapper pressed again if Moore thought homosexuality should be illegal, Crockett conceded he “probably” did.

MORE: Where Roy Moore Stands on Issues like Health Care and Crime

“Its just a sin, thats what it is,” he said. “Its what my bible tells me — the Old Testament and the New Testament.”

“That’s part of the problem we have in Washington, D.C., today,” Crockett continued. “We have too many people winging it out there. They’re fooling with women they shouldn’t be fooling with, they ought to love their wives. Roy Moore loves his wife.”

When asked in a 2005 C-SPAN2 interview with Bill Press, Moore said that “homosexual conduct should be illegal.” 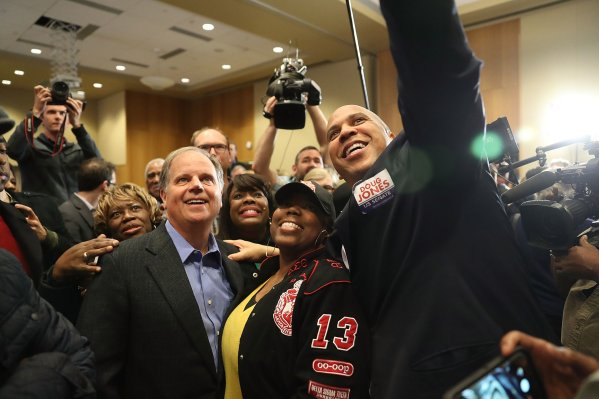