4 Winter Solstice Rituals From Around the World

Members of the Shakti Sings choir sing as druids, pagans and revelers gather in the center of Stonehenge in Wiltshire, England to celebrate the 2016 winter solstice.
Matt Cardy—Getty Images
By Melissa Chan

Thousands of people around the globe will herald the winter solstice, the shortest day of the year in the Northern Hemisphere, with centuries-old rituals like soaking in fruit-filled baths and dressing up as a devilish folklore legend that punishes naughty children around Christmas.

The solstice, which falls on Dec. 21 this year, marks the first day of winter. It starts the moment the Northern Hemisphere is pointed at its farthest distance from the sun. The winter solstice is considered a turning point in the year in many cultures. The sacred day is also called Yule to pagans celebrating the birth of the new solar year, according to Circle Sanctuary, a prominent pagan group in America. Dozens of pagans and druids head to Stonehenge, an iconic site in England, to pay tribute to the sun during the solstice.

Here are some of the ways people celebrate the winter solstice around the world:

Getting scared by Krampus in Austria

A member of the Haiminger Krampusgruppe dressed as the Krampus creature, an Austrian winter solstice ritual, lets himself be touched by onlookers prior to the annual Krampus night in Tyrol on Dec. 1, 2013.
Sean Gallup—Getty Images

Hordes of revelers descend on Hollabrunn, Austria each year during the winter solstice to watch a swarm of people dressed like Krampus — the half-demon, half-goat counterpart to Santa Claus — terrorize and tease the crowd in horned masks, fur body suits and whips. “It is weird, but it’s fun,” said Natalie Kononenko, a professor and Kule Chair in Ukrainian Ethnography Arts at the University of Alberta in Canada.

Krampus is a figure that punishes bad children by whipping and snatching them, according to Germanic folklore. The traditional Krampus run in Austria is believed to ward off bad spirits near the winter solstice, but it is also a source of local entertainment, Kononenko said. Last year, the creatures wielded torches, charged at delighted guests and jumped over security gates to lightly whip people, according to footage from the Associated Press.

While many of the costumes include giant horns, sharpened teeth and mangled faces — features that might be considered nightmarish to an ordinary person — the Krampus run annually amuses those in attendance. “It’s sort of like Halloween,” Kononenko said. “You get to dress up in these really disgusting costumes. You get to do stuff you don’t normally get to do.”

This year’s family-friendly Krampus run in Hollabrunn’s main square takes place Dec. 16. “To be really afraid again and experience evil with fun is the motto,” its organizers wrote on the event’s website.

Taking in a once-in-a-lifetime sight in Ireland

People gather for sunrise at Newgrange on the morning of the winter solstice on Dec. 21, 2014.
Brian Lawless—PA Wire/AP

Dozens of people, lucky enough to be selected through an annual lottery, get the chance to stand inside the Newgrange monument in Ireland and absorb the first rays of the day as they fill the ancient chambers during the winter solstice.

Newgrange is a burial mound in Ireland’s Boyne Valley that is over 5,000 years old. The Stone Age monument contains a 62-foot passage that leads into a chamber that is aligned with the sun as it rises during the winter solstice, according to its website. Between Dec. 19 and Dec. 23 around dawn, sunlight pierces through the top of the chamber and slowly illuminates the room for about 17 minutes.

More than 32,500 people applied for a spot inside the chamber this year, according to Newgrange’s website. Only 60 of them were picked from the lottery to partake in this winter solstice ritual.

Soaking in baths full of fruit in Japan

A pair of adult capybara and three babies take a yuzu-yu, or a hot bath with yuzu citrus fruits, a winter solstice ritual in Japan.
Noriaki Sasaki—The Yomiuri Shimbun/AP

In Japan, people traditionally soak in hot baths with the yuzu citrus fruit to welcome the winter solstice and protect their bodies from the common cold. During last year’s solstice celebration, children from a local preschool shared a dip in a traditional yuzu tub in the city of Toyooka as dozens of the yellow yuzu fruits surrounded them on the surface, according to Japan’s daily newspaper Asahi Shimbun. Similarly, the bath has become custom for animals in some Japanese zoos. Photos from the local media show Japanese macaques, hippos and capybaras enjoying fruit-filled baths last December in their enclosures at the Fukuoka City Zoological Garden and the Izu Shaboten Zoo.

In Korea, good luck on the solstice is associated with red bean porridge. Koreans will often make the dish both to eat and spread around the house to keep evil spirits away, according to Seungja Choi, a senior lector of East Asian Languages and Literatures at Yale University. Besides its believed spiritual benefits, Choi said, the meal also contains a lot of nutrition. “If you eat this, you get healthy,” she said.

Catching the sunrise at Stonehenge

The sun makes a brief appearance through clouds as druids, pagans and revelers gather in the centre of Stonehenge in Wiltshire, England for the 2015 winter solstice.
Matt Cardy—Getty Images

England’s famous Stonehenge lures thousands of visitors during the summer and winter solstices. Revelers gather at the prehistoric site of ancient stones in Wiltshire to sing, dance, play instruments, kiss the stones and do yoga as they wait for the sun to rise. The iconic Stonehenge is known for its precise alignment with the sun’s movement and may have been a sacred place of worship and celebration for solstices for thousands of years, according to English Heritage, which manages the popular destination. 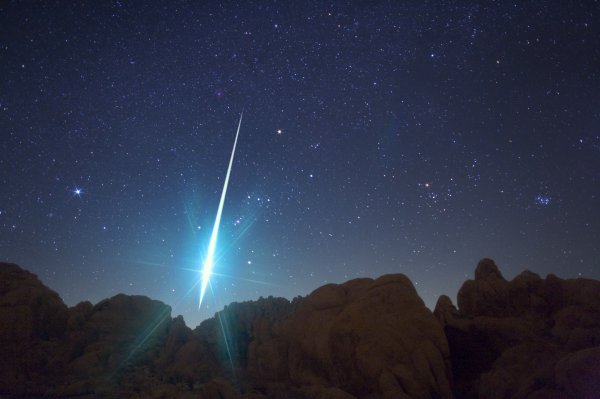 When to Watch the Geminid Meteor Shower
Next Up: Editor's Pick