The Geminid Meteor Shower Is One of the Best of the Year. Here's When to Watch

This year, the Geminid meteor shower will be visible on the night of Dec. 13 into the morning of Dec. 14. The Geminids can be seen in their full glory anywhere in the northern hemisphere, and will also be visible in the southern hemisphere — though they will not rise far above the horizon.

To see the Geminid meteor shower, it’s best to find a spot as far away from any light sources as possible, wrap up warm, and lie on a blanket facing the sky. Astronomers say the shower will be at its most intense around 2 a.m., when the sky is at its darkest. At its height, astronomers expect the Geminid meteor shower to send 120 meteors per hour barreling through the atmosphere. (Dark Sky Finder can help you find a suitable location for meteor shower viewing.)

The meteors will appear to radiate from the constellation Gemini, after which they are named. Gemini can be spotted just above and to the right of Orion’s Belt.

If the weather is too chilly to warrant staying outside for long — or if it’s cloudy — then you can stay inside and watch the Virtual Telescope Project’s livestream of the Geminid meteor shower. That stream starts on Dec. 13 at 5 p.m. ET, from telescopes in Arizona and Italy, and will continue until the meteor shower is over.

Last year, the Geminid meteor shower coincided with a so-called supermoon, the brightness of which made it harder to see the streaks of light left by the meteors as they burn up in the atmosphere. This year’s moon will be far less bright, helping the Geminids truly shine.

The Geminid meteor shower occurs as the Earth’s orbit passes through the vicinity of the remnants of an asteroid, which collided with another object around 200 years ago. 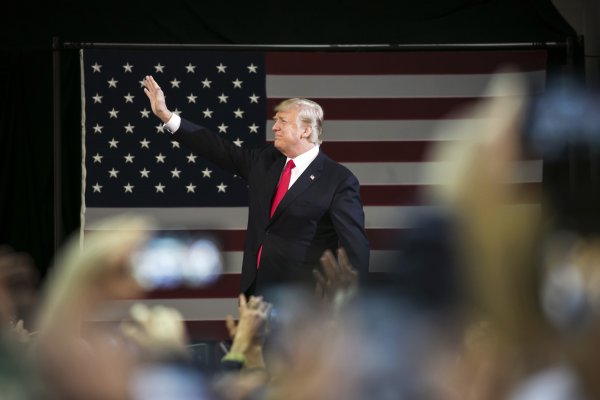 President Trump Signing Order to Send Americans Back to the Moon
Next Up: Editor's Pick