Why Military Women Are Missing from the #MeToo Moment

For military women, before #MeToo there was #NotInvisible, our attempt to draw attention to the epidemic of sexual assault in the military which continues to be largely ignored by the American public. Now as the #MeToo reckoning sweeps other industries, from Hollywood to politics, America is once again leaving service women behind.

We women veterans and military women also felt emboldened to share our stories as #MeToo entered the national conversation, but as the movement gains momentum we question why our voices are not included in this movement. Women in the military have been speaking out about sexual harassment and assault for decades, from Tailhook in the early 1990s to Marines United earlier this year. And for decades the American public has ignored our voices, allowing the military brass to pay lip service to eradicating the problem of sexual assault in the ranks, and failing to hold them accountable when, as scandal after scandal shows, sexual predators in the military continue to harass and assault with impunity.

Earlier this fall the Service Women’s Action Network (SWAN) surveyed more than 1,300 service women about the impact their military service had on their mental health. The survey identified military sexual trauma (MST) as the number one factor negatively affecting their mental wellness. Following the survey, SWAN brought together service women and women veterans from all branches and eras in a Summit in D.C. that further explored the survey results. The service women who attended included a 71-year-old Navy vet who shared with us that after multiple rapes and assaults the only way she could finish out her enlistment in the 60s was by numbing herself with alcohol on a daily basis until her contract was over. Not a lot has changed since then. As recently as this week, we at SWAN continue to field calls and emails from women who tell us they were discharged after being raped or women currently serving who tell us they are scared of reporting their rape.

Once women leave the service, they do not leave the military sexual trauma behind. In our survey, just over 60 percent of women indicated that military service negatively affected their mental health (most often tied to MST) and recent data bears out that fact: women veterans have higher rates of depression than non-veteran women and a shocking 250% higher suicide rate than civilian women. Even as women veterans are trying to access veteran health services, they report being harassed by their fellow veterans in VA facilities.

For the Post-9/11 generation of military service members and veterans, SWAN was the Silence Breaker raising the alarm about the sexual harassment and assault our nation’s military women (and men) endure. SWAN aggressively tackled the topic, even as major veteran’s organizations and the American public refused to engage with the issue, deeming it too controversial. SWAN continues the fight to have service women’s voices heard. Last month, we stood beside Sen. Kirsten Gillibrand as she once again reintroduced the Military Justice Improvement Act, which would take the decision to prosecute felonies, including sexual assaults, away from commanders who are at times the very perpetrators of the assaults, and put it in the hands of military prosecutors.

The military brass is fighting passage of MJIA, claiming with stunning hypocrisy that they have a “zero tolerance” policy for sexual assault, even as men and women in the military continue to endure assault and retaliation, as the latest report from the Pentagon shows. In 2016 the military had 6,172 reported sexual assaults, but the estimated rate in the military is more than twice that number — 58 percent of service members who reported an assault said they faced retaliation.

Women in the military put their lives on the line on behalf of this country. It is a profound betrayal of their commitment to our nation that the greater threat they face is from fellow service members and from a military justice system that fails them, time after time.

We are not invisible. America cannot continue to exclude military sexual assault from the national conversation. It is time for military commanders to face the #MeToo reckoning and be held accountable for the entrenched culture of sexual harassment and assault they have tolerated, and at times, participated in. Passing MJIA would be a first step in transforming that culture.

Antonieta Rico is a former staff sergeant who served for more than six years in the U.S. Army. She is a veteran of the Iraq War and currently serves as the Director of Communications and Policy at the Service Women’s Action Network. 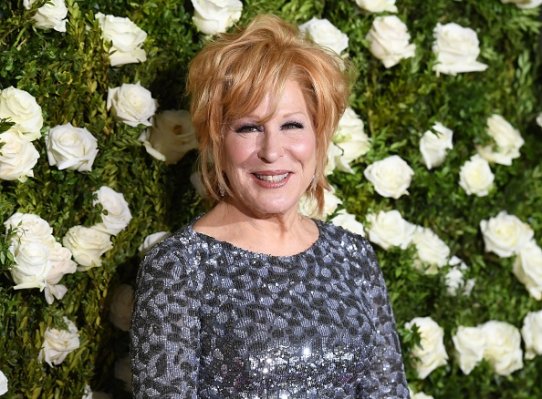 Bette Midler Alleges Geraldo Rivera Groped Her in the 1970s
Next Up: Editor's Pick