The White House again denied allegations of sexual misconduct against President Trump, as three of his accusers called for Congress to investigate his past behavior.

Speaking at the daily press briefing, spokeswoman Sarah Huckabee Sanders said that Trump has denied the women’s allegations, that any incidents took place a long time ago and that voters settled the discussion when they picked Trump in the 2016 election.

“[President Trump] thinks it’s a good thing that women are coming forward, but he also feels strongly that a mere allegation shouldn’t determine the course,” she said Monday afternoon. “In this case, the president has denied any of these allegations.”

The comments came after three of the 19 women who have accused Trump of sexual harassment or sexual misconduct spoke on the “Today” show about their experiences and held a press conference to call for a congressional investigation.

“Our stories seem to fall on deaf ears,” Rachel Crooks, who claims Trump forcibly kissed her, said during a press conference Monday morning. “In an objective setting, without question a person with this record would have entered the political graveyard of aspirations, never to return.”

Along with the accusations from the women, Trump was also caught on a hot mic on “Access Hollywood” bragging about touching women without their consent, a moment he apologized for and called “locker room talk” before the election.

Sanders repeated arguments she has made before that the election settled the question of whether Trump harassed women: “We feel like these allegations have been answered through that process.”

She also added that the allegations were about things which happened in the past.

“This took place long before he was elected to be president,” she said.

Democratic lawmakers have upped the stakes recently, with New York Sen. Kirsten Gillibrand calling for Trump to resign over the allegations in an interview Monday with CNN and Oregon Sen. Ron Wyden calling for an investigation.

Trump’s three female accusers said they were coming forward again because they felt that things had changed in recent weeks with the downfalls of major public figures like Hollywood producer Harvey Weinstein and Minnesota Sen. Al Franken over sexual misconduct.

“We’re at the position now where in some areas of our society people are being held accountable for unwanted behavior,” said Jessica Leeds, who has alleged that Trump groped her on an airplane, “but we are not holding our president accountable for what he is and who he is.”

Correction: The original version of this story misstated the state that Al Franken represents in the Senate. It is Minnesota, not Massachusetts. 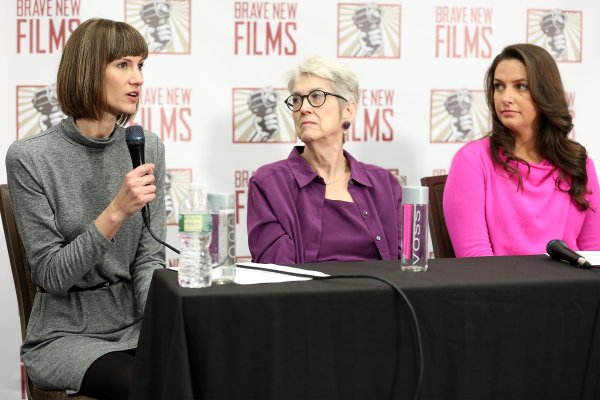 3 Female Accusers Call for Congress to Investigate President Trump for Sexual Harassment
Next Up: Editor's Pick