The Winter Solstice Is Today. Here Are 4 Things You Probably Didn’t Know

The start of December means winter is coming, and soon.

This year, the winter solstice will take place on Thursday, Dec. 21, 2017 for the Northern Hemisphere. (The Southern Hemisphere will experience its summer solstice at the same time.) It’s considered the shortest day of the year and, if you believe in astrology, also the worst. Astrologers talking to USA Today say the sun is expected to pass in front of the constellation Capricorn hours after Saturn does, which is a series of events some believe makes for a frustrating and difficult times.

The specific time the 2017 winter solstice happens depends on which time zone you’re in, but this tool helps give you an idea when and where the winter solstice will occur based on your location.

What other fun facts are there about the 2017 winter solstice? Here are four things you probably didn’t know.

What is the meaning of the winter solstice?

But just because there isn’t a lot of sunlight doesn’t mean it is always cold on the winter solstice. In fact, the NWS explains, the coldest and warmest temperatures typically occur weeks after the winter and summer solstices, respectively.

What happens during the winter solstice?

The National Weather Service notes that seasons are not caused by how close the Earth is to the sun, but rather how the Earth is tilted.

While the Earth is always tilted at 23.5 degrees, during the winter, that tilt is facing away from the sun. In fact, the winter solstice marks when the earth is tilted furthest away from the sun. As the Earth starts tilting further from the sun following the autumnal — or fall — equinox, temperatures in the Northern Hemisphere start to drop, which is why the December solstice marks the beginning of winter, according to the NWS. Temperatures won’t start picking up until around the time the Earth starts tilting toward the sun after the vernal, or spring, equinox.

When is the 2017 winter solstice in the Northern and Southern Hemisphere?

The 2017 winter solstice in the Northern Hemisphere will occur on Thursday, Dec. 21.

What does Stonehenge have to do with the winter solstice?

Stonehenge is a popular destination each year for the winter solstice. The site is often visited by pagans celebrating the sun’s “rebirth” for the new year, according to BBC, an event they also refer to as “Yule.” But it’s just one of the few ways people like to gather and celebrate the winter solstice around the world. Other winter solstice rituals include getting scared by Krampus and soaking in baths full of fruit. 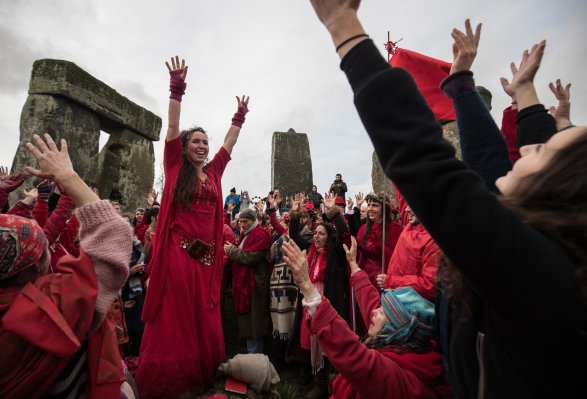 4 Winter Solstice Rituals From Around the World
Next Up: Editor's Pick