Rurik Jutting, convicted last year of the murder of two women in Hong Kong in a case that made headlines around the world, applied for leave to appeal his conviction on Tuesday in the territory’s High Court.

His defense team argued that errors were made by the previous trial judge in directions given to the jury concerning Jutting’s defense of diminished responsibility.

“The error made by the learned judge orally and in writing made repeatedly to the jury was to direct the jury that an abnormality of the mind for the purposes of the homicide ordinance meant a disorder,” McCoy told Justices Michael Lunn, Andrew Macrae and Kevin Zervos.

McCoy suggested that Jutting’s abnormality was “far outside the normal range.”

Jutting, 32, dressed in a blue shirt and with fist resting under a clean-shaven chin, appeared to follow the proceedings closely. He was surrounded by five correctional officers.

In November 2016, a jury unanimously found Jutting, a Cambridge-educated employee of Bank of America Merrill Lynch, guilty of torturing and killing Indonesian migrant workers Sumarti Ningsih, 23, and Seneng Mujiasih, 28. The Briton had pleaded not guilty to murder but guilty to manslaughter, citing “diminished responsibility” due to substance abuse, and narcissistic and sadistic conditions.

The court rejected his defense. Following the verdict, Jutting was given life and has been serving his sentence in a maximum security prison on the southern side of Hong Kong Island.

British banker Rurik Jutting accused of the murders of two Indonesian women, sits in a prison van as he arrives at the eastern court in Hong Kong on May 8, 2015.
Anthony Wallace/AFP—Getty Images

Jutting’s double murder trial shocked the world as the gruesome details of the killings emerged, the most incriminating of which came from iPhone footage shot by Jutting himself. He was arrested in November 2014 after calling the police to his high-rise luxury apartment where the two mutilated bodies of the women were found.

At the end of the trial, Judge Michael Stuart-Moore said “This must rank as one of the more horrifying murder cases ever to come to court in Hong Kong.”

“During this trial we have been made to dredge the very depths of depravity during the three days of torture he subjected his first victim to,” he added. “He described himself as evil and a monster, and neither is adequate to describe the true nature of what happened.”

Tuesday’s appearance was Jutting’s first in public since his trial last year. Proceedings have been adjourned until Wednesday morning local time. 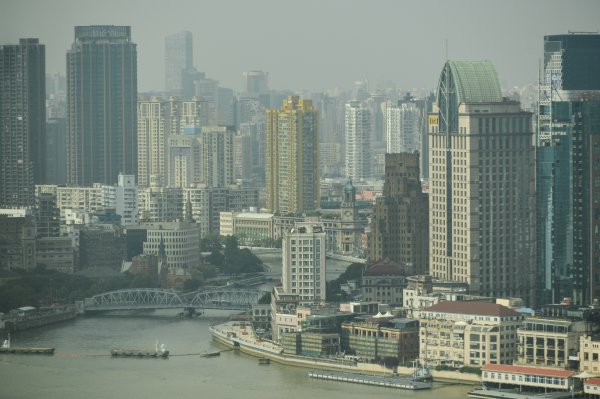 A Chinese Climber Has Died After Falling From a Skyscraper
Next Up: Editor's Pick