Republicans Bet Tax Cuts Would Help Their Political Fortunes. They May Have Misread That

Republican strategists for months have been urging lawmakers to notch a victory on taxes — anything, really, would count — so that they can have something to run on next year. So urgent the need, the argument went, that having nothing to show in 2018 could give Democrats’ a majority in the House and maybe even the Senate.

What they didn’t count on is this: for the first time in modern polling, tax cuts are more unpopular than tax hikes. That’s right, the Republican tax cuts that are likely to become law before the end of the year are underwater in the polls by 14 percentage points.

What once was billed as a winning strategy — with a victory in sight, to boot — could morph into a liability. Even George H.W. Bush’s 1990 tax increase, which ran counter to his “read my lips” promise, and Bill Clinton’s 1993 move were not this unpopular with voters. It’s a stunning departure for tax cuts, which typically poll well with voters; Reagan’s first round was a net positive by a roughly 2-to-1 margin in 1981.

So how did this happen? One answer may be the tax cuts themselves. House and Senate negotiators are going to resolve differences in their versions of a tax bill each chamber passed. But the gist is basically the bill cuts taxes for the super-wealthy, ends taxpayers’ ability to deduct state and local taxes and nixes the estate taxes for all but the tremendously rich. An analysis from the Center on Budget and Policy Priorities found 62% of the tax cut goes to the top 1% of earners. (By comparison, the cuts put in place under President George W. Bush sent a more modest 27% of benefits to the one-percenters.)

Some families could end up paying more to Uncle Sam as a result. In this, Democrats have had plenty of material with which to tar the Republicans, and an apparently receptive audience. A Quinnipiac University poll, released Dec. 5, finds 61% of all voters think the current proposal benefits the wealthy at the expense of the middle class, and 41% of voters say the plan would actually raise their taxes.

“Ed Royce voted for the Republican tax plan that raises taxes on middle-class families,” one 30-second ad says of the California Republican. “It raises taxes on 36 million middle-class families. AARP says it will result in a $25 billion cut to Medicare. And it adds $1.4 trillion to the deficit.” A similar ad is running in 21 other districts with potentially vulnerable Republican incumbents.

Republicans, including President Donald Trump, have disputed the nonpartisan analyses that back up those claims as academic tomfoolery. Yet Republicans cannot produce any credible studies that say those analyses are wrong, and they insist the tax cuts will spark an economic boom that will cover the $1.5 trillion price tag. Democrats, if the studies are to be believed, think they will have the more compelling argument heading into 2018.

The lashing at the tax bill has matched with activists’ outrage — a groundswell of anger that has already shaped 2017, whether in the form of the women’s marches, the #metoo campaign or the slate of new candidates seeking political office. The tax bill, Democrats suggest, will only help sustain the outrage and help build an electoral wave next year. Recent protests at the Capitol, for instance, drew hundreds of people that overwhelmed the typically sleepy government building.

“With polls showing that the GOP tax scam is widely and increasingly unpopular, this bill will be a huge political liability for Speaker Ryan and House Republicans in 2018,” said Tyler Law, a spokesman for House Democrats’ campaign arm.

Trump, for his part, is insisting that the tax plan is good for the middle class and bad for his ultra-rich pals. He says he’ll be a “big loser” if the plan goes through, although plenty of analysis suggests precisely the opposite. Trump says repeatedly he’s simply doing right by the people who helped him win the election.

What’s unclear, though, is if those same voters will feel as loyal. Among white voters — one of Trump’s strongest demographic blocs last year — there is disapproval of the bill by a 14-point gap. Across all income levels, there is a belief that the tax plan will raise their taxes.

And it’s not as if Trump is the strongest figure when it comes to the economy. More voters say Barack Obama is responsible for the current economy than Trump by a 13-point margin, according to a Quinnipiac University poll from November.

To be sure, there is still almost a year before voters cast ballots, and at least nine months before they even start caring about the races. Yet, the groundwork is being laid carefully and an electoral wave may be impossible for even the savviest Republican to stem. In this, there are serious risks for Republican members who can point to the tax cuts as something they delivered. But if local economies aren’t reflecting it or people don’t believe it, it may not matter. After all, Trump won in 2016 railing about a poor economy when most indicators told a different story. 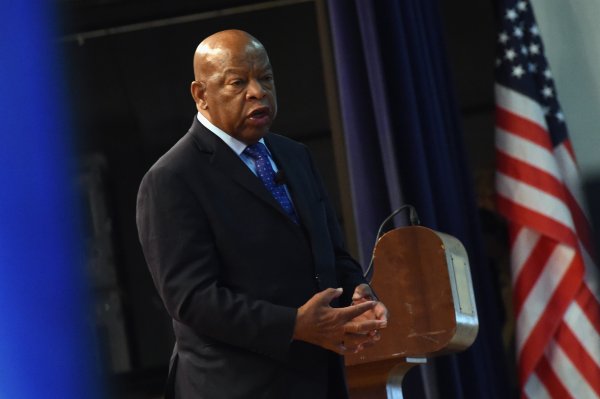 What To Know About John Lewis, The Congressman Protesting Against Trump
Next Up: Editor's Pick