Bryan Singer is being sued for allegedly raping a 17-year-old boy in 2003, according to legal documents.

The lawsuit alleges that the X-Men director offered to take the then 17-year-old Guzman on a tour of the boat. When they got into a room, the lawsuit claims Singer “forced Cesar to the floor, shoved Cesar’s face against his crotch area and demanded Cesar perform oral sex on him.”

The documents provide a graphic account of the alleged incident, claiming that Singer forced himself on Guzman, who “pleaded with [Singer] to stop” throughout the ordeal.

Later, the director allegedly told Guzman that he was a “producer in Hollywood and that he could help Cesar get into acting as long as Cesar never said anything about the incident.” The documents add, “He then told Cesar that no one would believe him if he ever reported the incident, and that he could hire people who are capable of ruining someone’s reputation.”

Guzman says the alleged incident caused him “to experience severe psychological, mental and emotional injuries, shame, humiliation and loss of enjoyment of life.”

A rep for Singer tells PEOPLE in a statement, “Bryan categorically denies these allegations and will vehemently defend this lawsuit to the very end. Cesar Sanchez-Guzman apparently claims that he did not remember this alleged incident from 2003 until now. Significantly, when Sanchez-Guzman filed for bankruptcy only a few years ago, he failed to disclose this alleged claim when he was supposed to identify all of his assets, but conveniently, now that the bankruptcy court discharged all of his debts, he is able to recall the alleged events.”

In 2014, aspiring model and actor Michael Egan filed a civil suit against the director, claiming he forced him into sex during parties in California and Hawaii in the late 1990s. Singer’s attorney at the time, Marty Singer, called the lawsuit “absurd and defamatory.”

Singer also submitted evidence he claimed proved he was not in Hawaii at the time of the alleged assault. Egan later parted ways with his attorney after he said he was pressured into taking a settlement. He ultimately dropped the lawsuit, saying that while his claims had merit, he could not find a new lawyer to represent him. In 2015, Egan was sentenced to two years in prison after pleading guilty to committing securities and wire fraud, according to Variety.

Later in 2014, a second accuser filed a sexual abuse lawsuit against Singer and entertainment executive Gary Goddard. When he was 17, the man claimed in the lawsuit, Singer fondled him and tried to force him to have sex. Singer and Goddard both vehemently denied the allegations.

The anonymous accuser was represented by Jeff Herman, the same lawyer who represented Egan. “After the substance of Mr. Herman’s previous defamatory and fabricated filing in Hawaii was disproved based on unassailable evidence, Mr. Herman’s desperation has led him to fabricate these new anonymous accusations against Mr. Singer, which we will also prove to be completely false,” Singer’s attorney said in a statement at the time.

A Los Angeles court accepted Singer’s motion to dismiss on the grounds that there was no legal basis for the suit, and that it was improperly brought.

Meanwhile, Singer was recently fired from directing a biopic about the band Queen called Bohemian Rhapsody.

Singer, known for directing The Usual Suspects and four X-Men movies, was ousted from the long-gestating project following an extended absence from the London set that resulted in a production shutdown. The Hollywood Reporter, which broke the news of Singer’s firing, reported that the move “reflected an escalating clash” between the director and lead actor Rami Malek. 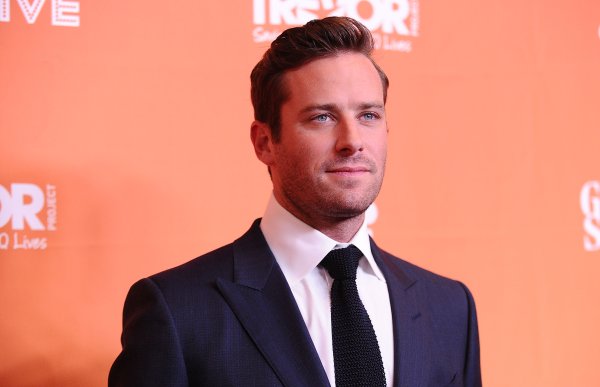 Armie Hammer Is Making His Next Movie For His Daughter
Next Up: Editor's Pick