Some Republicans Are Defending Al Franken. They Don't Think He Should Resign

In the latest twist in the sexual harassment controversies roiling Congress, Republicans have taken to defending Democratic Sen. Al Franken.

Yes, that’s right. While Franken announced Thursday he would resign in the “coming weeks” amid growing allegations of sexual misconduct, some Republicans are not so sure he should have to leave the Senate.

“What you saw today was a lynch mob,” former House Speaker Newt Gingrich said Wednesday on Laura Ingraham’s Fox News show after at least 35 Democratic Senators called on Franken to step aside. “Let’s not have due process. Let’s not ask anybody any questions. Let’s not have any chance to have a hearing. Let’s just lynch him, because when we get done lynching him, we’ll be so pure.”

Eight women have accused Franken of sexually harassing them, with the most recent being a woman who told Politico this week that Franken tried to forcibly kiss her in 2006.

But Gingrich is not alone in claiming the Democrats are not acting entirely out of sincere moral concern. When interviewing Gingrich on Wednesday, Ingraham also said she believes the Democrats are using Franken’s situation to claim the moral high ground so they can try to take down Republicans accused of sexual misconduct like President Donald Trump and Alabama Senate candidate Roy Moore.

“They’ve come down with a sudden case of feverish morality,” Ingraham said Wednesday. “But what it really is, is nothing more than a political calculation by the Dems.”

“They have now determined that it is worth sacrificing Franken, just like they did John Conyers — throw him overboard to save the political Titanic that is their party,” Ingraham added. “What does this do? It sets the precedent for the Democrats to try to drive Roy Moore from office, should he win the Alabama Senate race. And two, this is the next step in the quest to impeach President Trump.”

Moore, who has been accused of sexual misconduct with teenagers when he was in his 30s, has the support of Trump and the Republican National Committee. Despite some Republican lawmakers initially condemning his alleged behavior last month, many Alabama Republicans have stood by Moore.

They have used a variety of tactics to dismiss the claims against him, but many of them come down to Republicans saying they do not have proof he did anything wrong. That seems to be the argument GOPers are using again to defend Franken.

Tucker Carlson on Wednesday bid “good riddance” to Franken, but then the Fox News host went on to question the circumstances of the Democrat’s resignation.

“Enjoy the schadenfreude, the pure animal thrill of watching a powerful person knocked from a high perch, but at the same time, ask yourself, what if this happened to you?” Carlson said, according to the Washington Post. “Imagine being accused by someone whose name you didn’t know of something that supposedly happened more than a decade ago. How would you respond? How could you respond? What if you were innocent, by the way? And what if nobody cared?”

Other Republicans such as Ari Fleischer, who served as White House press secretary under President George W. Bush, argued Franken’s future should have been left up to voters.

And the Washington Examiner’s Byron York also raised concerns about Franken not receiving due process. 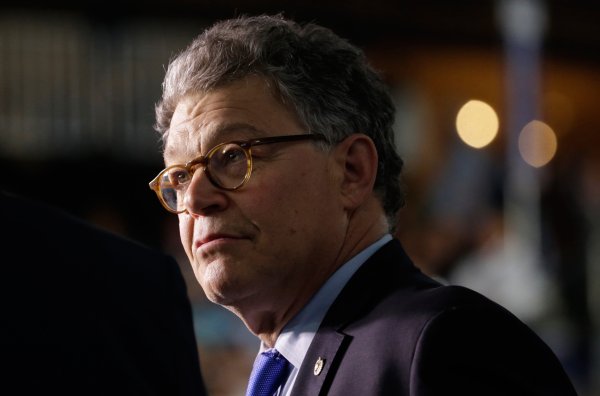