Outside the headquarters of Egypt’s Journalists’ Syndicate in Cairo on Thursday evening, police dragged the barricades into place with a rattling noise, metal on pavement. The traffic on Ramsis Street rumbled past the armored personnel carriers and the riot police brandishing rifles. Traffic cops yelled over the roar of engines and horns, waving at drivers to keep moving.

In years past, the steps of the Syndicate had been a designated protest zone, a tiny patch of real estate where Egyptians were permitted to vent political discontent under the ever-present eye of the police. Yet 24 hours after President Donald Trump announced a decision to recognize Jerusalem as the capital of Israel, there had been no massive eruption of protest here in Egypt.

A few demonstrators came out early in the day. One had tweeted a photo of a burning Israeli flag. Some chanted against Israel’s Prime Minister: “Netanyahu! Worthless!” But most Egyptians — whether fearfulx of state repression, exhausted from years of political turmoil, or preoccupied with their own daily concerns — chose not to risk arrest or worse by protesting in support of Palestinians. On Friday, hundreds more protested in Cairo and Alexandria, but the demonstrators were penned in by riot police.

The muffled protest in Cairo stood in contrast to the outpouring of condemnation of Trump’s move by Middle Eastern governments. Even among the conservative leaders of Arab allies who welcomed Trump’s rise to power, the chorus of criticism was unanimous. Egyptian President Abdel-Fattah al-Sisi told Trump of Egypt’s “unwavering” support for keeping the status quo in Jerusalem. The United Arab Emirates voiced “regret and condemnation.” Saudi Arabia expressed “great disappointment.” Iraq summoned the U.S. ambassador to Baghdad. The Arab League scheduled urgent meetings to discuss Jerusalem.

Officials in the region said Trump’s decision ended any pretense that the United States could be an evenhanded broker in the Israeli-Palestinian conflict. The Palestinian Authority condemned the move, which further cemented Israeli control over a city Palestinians regard as their own capital. Hamas, which controls the Gaza Strip, said the move “opened the gates of hell.”

Yet in countries across the region those gates remained shut. Apart from localized protests, there was little sign of the kind of mass mobilization and chaos that some had anticipated. Thousands marched in Tunis on Friday. Protests also materialized in Turkey, Jordan, and elsewhere, but the demonstrations produced little urgency, and there was no indication that the protests would place pressure on governments to alter their policies toward the United States or Israel.

In the Palestinian territories, the public also expressed anger. In the West Bank, stone-throwing demonstrators fought with armed Israeli forces. Along the Gaza-Israel border, one Palestinian was killed. But the demonstrations did not rise to the level of an outright uprising.

For diplomats and political observers from the Mediterranean to the Gulf, the decision brought mainly confusion. “We haven’t met anyone who supports President Trump’s decision, and no one knows what to do. No one knows what steps to take,” said a senior Turkish official present for a meeting between Tillerson and Turkey’s Foreign Minister Mevlut Cavusoglu in Brussels on Tuesday.

The president’s decision underscores the uncomfortable place the Palestinian cause holds in political life in the region. For decades, autocratic leaders have played sympathy for the Palestinians to distract from domestic political concerns. Leftist and Islamist movements have turned to Palestinian solidarity to galvanize action. But since Israel’s defeat of the Arab armies in 1967 and its occupation of east Jerusalem, the West Bank, and Gaza, the Palestinian issue has been a symbol of the failure of pan-Arabism and the powerlessness of Arab regimes.

In recent years, Palestinian solidarity has also been a catalyst for protests in otherwise repressive regimes in the Arab world. In Cairo in 2000, protests in support of the second Palestinian “intifada” hatched a generation of activists, some of whom would go on to participate in the uprising that toppled President Hosni Mubarak in 2011. Today, no such outburst of demonstrations appears forthcoming.

“It speaks to the almost unbridgeable disconnect between rulers and ruled in this region,” said Mouin Rabbani, an Amman-based analyst with the Institute for Palestine Studies. “All the indications are that the Americans have nothing to worry about. I would expect that to continue to be the case unless and until these governments, and Saudi Arabia in particular, feels that it needs to respond to popular mobilization.”

Outside of Israel and the Palestinian territories, no country will be struggling with Trump’s decision so much as Saudi Arabia, where King Salman and 32-year-old Crown Prince Mohammed Bin Salman have developed a warm relationship with Trump and his administration. The kingdom positions itself as a leader in the wider Muslim world by dint of its custodianship of Islam’s two holiest sites in Mecca and Medina. On Wednesday, Trump acceded to Israel’s claim over the Islam’s third holiest site—the Al-Aqsa Mosque compound in Jerusalem, a city holy to all three Abrahamic faiths.

Saudi Arabia’s condemnation of the Jerusalem decision was the first sign of disagreement with the United States since Trump took office in January. Trump has voiced support again and again for the Saudi leadership coalescing around the crown prince. There were other signs of tension in the U.S.-Saudi alliance. The same day as his decision on Jerusalem, the White House also issued a two-sentence statement urging Saudi Arabia to ease its sanctions on war-torn Yemen. “This must be done immediately for humanitarian reasons,” read the statement, with no further explanation.

Prior to his televised announcement on Wednesday, Trump and his administration briefed foreign governments on the decision. The president phoned Egypt’s President Sisi, King Abdullah of Jordan, and Palestinian President Mahmoud Abbas. In Brussels, Secretary of State Rex Tillerson briefed other states on the sidelines of a NATO meeting. In Ankara, Turkey’s President Recep Tayyip Erdogan held a summit with Jordan’s King Abdullah. Trump’s decision, Erdogan said, would “ignite new tensions and clashes in our region.”

Whether this will go further than a few burned American flags and effigies of Trump remains to be seen. 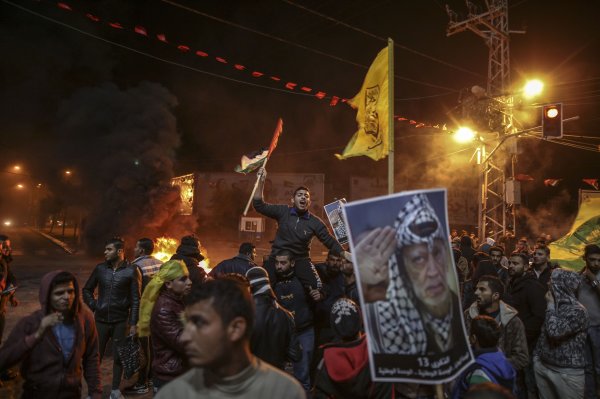 Trump Throws a Wrench in Israeli-Palestine Relations
Next Up: Editor's Pick