President Trump will undergo a routine physical examination in early 2018 and the records will be released to the public, the White House said Thursday.

In response to a question about Trump appearing to slur a few words at the end of his speech on recognizing Jerusalem, White House spokeswoman Sarah Huckabee Sanders said Trump will undergo the exam at Walter Reed Medical Center, a tradition for most recent presidents.

“He does have a physical scheduled for the first part of next year, the full physical that most presidents go through,” White House press secretary Sarah Huckabee Sanders told reporters Thursday afternoon. “That will take place at Walter Reed [Medical Center] and those records will be released by the doctor following that.”

As for the slurred speech during his Jerusalem announcement, Sanders called concerns “ridiculous” and said, “The president’s throat was dry, nothing more than that.”

Trump is the oldest person ever elected president, coming into his first term in office at age 70.

During the campaign in December 2015, Trump’s physician released a statement calling his blood pressure and lab results “astonishingly excellent” and saying his “physical strength and stamina are extraordinary.” The doctor added that should Trump win, he would be “the healthiest individual ever elected to the presidency.”

Trump also appeared on the “The Dr. Oz Show” to discuss his health, but he did not share detailed medical records as past candidates have. 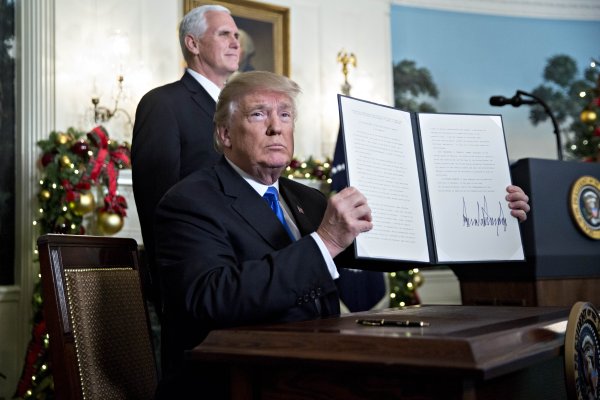