Before she was even sworn in as Education Secretary, Betsy DeVos emerged as one of the most controversial members of the Trump Administration. Her confirmation required a historic tie-breaking vote from Vice President Mike Pence after every Senate Democrat and two Senate Republicans voted against her.

In the months since, like many others in the Trump Administration, DeVos has set about rolling back Obama-era policies, from Title IX guidance on campus sexual assault to regulations on for-profit colleges. She quickly found support from conservatives who had backed her previous work as a school choice advocate, but she struggled to build broad national support for her initiatives. DeVos, a prominent Republican donor, faced criticism from Democrats, teachers unions and civil rights advocates, many of whom noted that she did not have a background as an educator.

“She comes in with a very different background, and I think that has significantly limited her ability to both get policy through and also kind of build support for herself and have some political capital,” said Douglas Harris, a fellow at the Brookings Institute’s Brown Center on Education Policy.

A Morning Consult/Politico poll conducted in September found that 40% of voters had an unfavorable view of DeVos, making her the least popular member of Trump’s cabinet. “To have the education secretary have the incredibly negative approval ratings, disapproval ratings, that she has suggests both the name recognition and also the level of controversy that she’s generated,” Harris said.

An Education Department spokesperson said in an email that DeVos has “shifted the conversation around education in America to be focused on the unique needs of individual students,” rather than focusing on debates over “funding, buildings, systems, tests.”

Here’s a look at the most controversial efforts of DeVos’ tenure so far:

In September, DeVos rolled back controversial Obama-era guidance on how universities should handle sexual assault complaints on campus. The 2011 guidelines had instructed universities to use a “preponderance of the evidence” standard when adjudicating sexual assault complaints instead of the “clear and convincing evidence” standard, which requires a higher burden of proof and was used by some schools at the time.

DeVos implemented interim guidance allowing schools to decide which standard of evidence to use. The move drew praise from advocates for students who say they were falsely accused of sexual misconduct, who had argued that the Obama Administration’s guidance had threatened due process rights. But victims’ advocates condemned the rollback, warning it will further dissuade victims from coming forward to report sexual assault.

Ahead of the decision, DeVos stoked controversy when she held meetings on campus sexual assault in July, speaking with victims of sexual assault as well as students who say they’ve been falsely accused. Accused students left feeling that they “were finally being seen,” one said. Victims’ advocates feared DeVos’ discussion of false accusations would reinforce “outdated ideas and myths about rape” and fuel a narrative that sexual assault reports need not be taken seriously.

Also in July, Candice Jackson, the acting head of the department’s Office for Civil Rights, sparked outrage when she said that 90% of sexual assault complaints “fall into the category of ‘we were both drunk.'” She later apologized.

It’s not yet clear whether DeVos’ interim guidance on campus sexual assault will remain in place. “In the coming months, the Department will be seeking public input on a new regulation that aims to protect all students from sexual misconduct and also ensure the due process rights of all parties involved are protected,” department Press Secretary Liz Hill said in an email.

Early in the administration, the Department of Education and the Department of Justice rescinded guidelines that allowed transgender students to use the bathrooms aligned with their gender identity. The department has said that withdrawing the guidance did not leave students without protections, and that court rulings and other guidance documents should be used to enforce Title IX for all students. But transgender advocates have criticized the move as a step backward, warning that it would harm transgender students.

Later, in June, an internal memo indicated that the department was scaling back investigations into civil rights violations at public schools and universities, the New York Times reported. In the two months that followed, the department also closed or dismissed more civil rights complaints than previous administrations had in similar periods of time, Politico reported.

The department has said that it is striving to address a large backlog of cases and is working to quickly address individual complaints on a case-by-case basis, easing back on an Obama Administration requirement to broaden investigations to identify systemic issues.

Some civil rights advocates also raised red flags when the department rescinded guidance outlining the rights of students with disabilities as part of the Individuals with Disabilities in Education Act (IDEA). But the department said students would not be affected and that the guidance was rescinded because it was “outdated, unnecessary or ineffective.”

Thomas Hehir, who supervised the implementation of IDEA as director of the Department of Education’s Office of Special Education Programs from 1993 to 1999, said some of the documents should have been rescinded but others had provided important clarification to states and school districts.

“The statute is pretty complicated,” he said. “If you have a child and you’re trying to figure what this means for my child, you really want that explained in clearer language.”

Prior to becoming Education Secretary, DeVos was a prominent school choice activist, and over the past year she has continued to advocate for charter schools and programs that allow parents to use vouchers to send their child to a private school. While making school choice changes on a national scale would require an act of Congress, education experts say DeVos is beginning to leave a long-term impact on the issue by opening the debate over what counts as a “good education.”

“When you look at her speeches, they’re like oatmeal. There’s very little robust policy initiatives you can see in public,” said Michael Apple, a University of Wisconsin education professor and National Education Policy Center fellow. “But what she is doing is changing the debate, which is actually the first step. In order to make legislation, you have to change the debate.”

Robert Enlow, president of the advocacy group EdChoice, agrees. “I expected her to do exactly what she has done, which is elevate the conversation about school choice,” he said. “She’s changed the dialogue.”

And her advocacy has started to impact some legislation. The Republican tax plan, for example, would allow families to use a tax-free savings account intended for college tuition to pay up to $10,000 in K-12 private school tuition each year — a provision that critics say will only help wealthy families who can already afford private school. DeVos praised the plan as a step toward investing in “individual students, not systems.“

DeVos’ discussion of school choice also yielded one of her biggest gaffes of the year, when she described historically black colleges and universities as “pioneers” of school choice in February, neglecting the fact that HBCUs were necessary because African-American students were excluded from other institutions. Her visits to local schools have consistently been met with protests by parents and teachers who argue that her support for school vouchers will threaten the public school system.

In June, DeVos blocked the Obama Administration’s protections for students attending for-profit colleges — something that Apple said was “truly, truly major in its impact.”

The regulations, which were set to take effect this year, would have provided debt forgiveness to students defrauded by for-profit colleges and would have cut off funding to for-profit colleges that burdened students with loans while failing to prepare them for gainful employment. DeVos said the rules created a “muddled process that’s unfair to students and schools, and puts taxpayers on the hook for significant costs.”

Democratic attorneys general in 17 states and the District of Columbia have sued DeVos, urging her to enforce the regulations. And Democratic lawmakers have also raised concern about how student loan borrowers will be affected.

“It’s clear that commercialized and for-profit colleges and universities are being let off the hook. There’s much less accountability,” Apple said. “That actually is a very significant change.”

The department is currently working on a new version of the rule under the negotiated rulemaking process but has not yet released further details. “It is the Administration’s aim to protect students from predatory practices while also providing clear, fair and balanced rules for colleges and universities to follow,” said Hill, the department spokesperson. 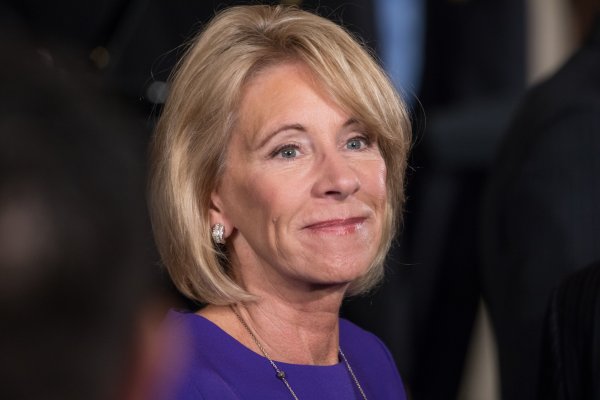 Betsy DeVos Addresses Those Rumors That She’s Resigning
Next Up: Editor's Pick