President Trump’s decision to move the U.S. embassy from Tel Aviv to Jerusalem was welcomed by evangelical voters, pro-Israel organizations and some of his biggest donors.

Though many Middle East experts warned that the decision to recognize Jerusalem as Israel’s capital could inflame tensions in the area, Trump’s decision to follow-through on his campaign pledge was praised in other quarters.

The Zionist Organization of America released a lengthy statement hailing the move as “historic, moral and just.” The Republican Jewish Coalition took out a full-page ad in the New York Times expressing similar sentiments, offering continued support for his presidency.

“President Trump has acted with moral clarity,” the ad reads. “The bond between the U.S. and Israel is strong and after eight years of the Obama administration, the days of daylight between our nations are over.”

Polls show that most Americans oppose moving the U.S. embassy to Jerusalem — 63% in one recent national poll. But evangelical Christians, who overwhelming supported Trump in the 2016 election, back the move, although more narrowly, with 53% supporting it in the same poll.

Shibley Telhami, a non-resident Senior Fellow at Brookings Institution and “Professor, and Director of the University of Maryland Critical Issues Poll and a critic of the decision, noted that presidents from both parties have pledged to move the embassy for years but never followed through. He said it’s not clear that Trump would have been hurt among the evangelical community if he hadn’t gone ahead, especially since he’s worked on other priorities for them.

“None of them would have abandoned him if he hadn’t taken this stance because he’s given them so much more,” he said.

Trump’s decision was also popular with small group of major donors who backed his presidential campaign.

Casino billionaire Sheldon Adelson, a supporter of the embassy move who backs both the Zionist Organization and the Republican Jewish Coalition and, along with his wife Miriam, is also a major donor. He donated at least $20 million to a super PAC designed to defeat Hillary Clinton in 2016, and $5 million to Trump’s inauguration committee.

So is Bernard Marcus, the co-founder of Home Depot, who donated $5 million in 2016 to a super PAC that backed Trump’s candidacy, and, like Adelson, sits on the Republican Jewish Coalition board of directors, and Elliott Broidy, a venture capitalist who was National Vice Chairman of the Trump Victory Campaign during the campaign and Vice Chairman of the Presidential Inaugural Committee. A representative for Adelson did not respond to repeated requests for comment, and a representative for Marcus declined to comment. The sentiment however, according to a Republican operative with close ties to the Jewish community, is that any pressure put on Trump is nowhere near comparable to what congressional Republicans were facing on tax reform.

“I think everyone was confident the President one day would do it and they’re very happy and impressed it happened now,” Broidy told TIME on Wednesday. He said that he had been in touch with Trump, but not on this specific issue, but that he had spoken with people who were unhappy that the President did not make this announcement six months ago. “It’s one issue of many that matters to me .. I am happy he followed through on his campaign pledge.”

Matt Brooks, Executive Director of the Republican Jewish Coalition, said his entire organization — including members of his Board of Directors — have frequently been in touch with Trump and Vice President Mike Pence, as well as key members of his Middle East policy team, including Senior Adviser Jared Kushner, Jason Greenblatt, the Representative for International Negotiations, and U.S. Ambassador to Israel David Friedman.

“We never miss a chance in talking to administration folks, also the Republican friends in the house and the Senate and the Governors [about] how important the recognition of Jerusalem is in moving our embassy,” Brooks said. “It comes up in many of the conversations we have.”

Still, Telhami, who said he has spoken with White House advisers conducting the negotiations, said Trump didn’t simply act to please his donors.

“When you consider the strategic consequences, Adelson alone cannot possibly explain the outcome,” he explained. “He still has three years to go in his first term, so even if Adelson wasn’t happy about a delay, Trump had plenty of time and opportunity to placate him.”

A Republican operative had similar sentiments. “Clearly there are a lot of people the president admires but is this a bone he’s throwing to certain donors? Not at all? Were there people who have access to the president who were able to make a case for these issues and reinforce them? Absolutely. But the fact that he’s doing this for his donors couldn’t be farther from the truth.”

The timing of Trump’s announcement was fortuitous, coming on the eve of Thursday’s White House Hanukkah Party, where hundreds of Jewish leaders are expected to be in attendance — and will likely praise Trump for his decision.

“It’s going to be overwhelming, it’s going to be appropriately so,” said Brooks of the event. “The speech today by this president was probably one of the most historic and consequential speeches on Israel by any U.S. president ever.”

“Anything they felt frustrated about — it will be instantly forgotten,” said the Republican operative with close ties to the Jewish community. “He will be genuinely loved in that room for doing this.” 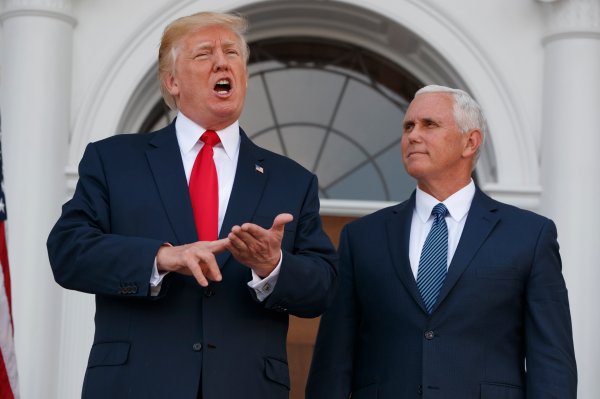 Official Denies Mike Pence Offered to Replace Trump As the Republican Nominee
Next Up: Editor's Pick