The U.N. Isn't Ruling Out 'Elements of Genocide' in Myanmar. Here's What That Means

The U.N. has issued its strongest rebuke yet of Myanmar’s persecution of the Rohingya, a mostly stateless Muslim minority, with the body’s top human rights official suggesting that recent military operations in Myanmar’s western Rakhine State could include “elements of genocide.”

Addressing a special session of the Human Rights Council on Dec. 5, High Commissioner for Human Rights Zeid Ra’ad al-Hussein described “widespread, systematic and shockingly brutal attacks against the Rohingya community” that “deliberately and massively targeted civilians,” and enumerated actions “warranting the attention of the International Criminal Court” that have been perpetrated against the Rohingya by Myanmar’s security forces and local militia.

More than 626,000 Rohingya have been displaced from Myanmar’s Rakhine State into Bangladesh since late August, according to U.N. estimates, the majority of them women and children. The Rohingya, a persecuted minority, fled a campaign of violence by Myanmar’s military, which was launched in response to a series of deadly attacks on security posts by a Muslim armed group on Aug. 25.

While Myanmar claims that its “clearance” operations are intended to root out terrorists, displaced Rohingya say that the military is indiscriminately targeting civilians, including children, with human rights groups documenting accounts of extrajudicial killings, arson, and sexual violence. International bodies, including the U.N. and U.S., increasingly agree — Zeid said the operations “appear to have deliberately and massively targeted civilians.”

Zeid’s latest statement is the strongest language yet from the U.N. on the crisis in Myanmar, suggesting that a total lack of access to the conflict zone raises serious questions about what transpired. The High Commissioner recounted a list of recent allegations against Myanmar security forces, including “killing by random firing of bullets… serious bodily or mental harm inflicted… various forms of torture or ill-treatment,” and widespread sexual violence. “Given all of this, can anyone rule out that elements of genocide may be present?” he asked. Last month, experts at the the U.S. Holocaust Memorial Museum and human rights watchdog Fortify Rights warned of “mounting evidence” that genocide is being committed against the Rohingya.

The U.N. defines genocide as an international crime committed “with intent to destroy, in whole or in part, a national, ethnical, racial or religious group.” But individuals are infrequently charged with genocide, and component crimes, including murder, forced deportation, torture, and sexual violence, can also be classified as ethnic cleansing and crimes against humanity, which have not been specifically defined under international law and therefore aren’t prosecutable.

In September, Zeid called the crisis “a textbook example of ethnic cleansing.” Secretary of State Rex Tillerson issued a stern condemnation last month after traveling to Myanmar, saying that the campaign “constitutes ethnic cleansing” and those who perpetrated atrocities “must be held accountable.”

Rights groups widely hailed the resolution. Human Rights Watch said the Council sent a “strong message” that the global community will not “avert its gaze” from the plight of the Rohingya.

“The U.N. resolution makes clear that the international community retains a watchful eye over the plight of the Rohingya and demands action. But it needs to ensure that its rhetoric is matched by its will to prevent further mistreatment, forced returns, and assaults to the human rights and dignity of the Rohingya,” Laila Matar, HRW’s senior U.N. advocate said in a statement.

Myanmar and Bangladesh reached a tentative agreement in late November to begin repatriating Rohingya within two months, but experts and rights groups have raised concerns that Rohingya could suffer further violence in Rakhine or face apartheid in camps like those that have existed in the central part of the state since riots in 2012.

Zeid also rejected a repatriation scheme, which he called “hasty window-dressing of these shocking atrocities,” without “sustained human rights monitoring on the ground.” Rights groups and independent media have been barred from northern Rakhine since violence in October 2016, except for a few government-staged press tours. But with no clear diplomatic or humanitarian solution, hundreds of thousands of Rohingya are waiting in overcrowded displacement camps, where supplies are stretched thin.

Zeid also called for “a new impartial and independent mechanism” to facilitate criminal prosecutions, which he acknowledged are “extremely rare” in Myanmar. In March 2017, the U.N. set up a fact-finding mission to investigate allegations of rights abuses, but its members have not been granted visas to the country. The commission interviewed Rohingya in Bangladesh instead in October, where they heard many accounts that “point to a consistent, methodical pattern of actions resulting in gross human rights violations,” according to a statement. 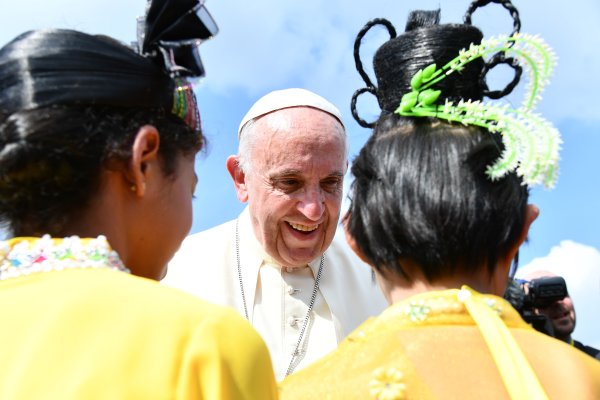 Pope Arrives in Myanmar Amid Simmering Tensions
Next Up: Editor's Pick