Mitch McConnell Insists 'No Change of Heart' Over Roy Moore

Senate Majority Leader Mitch McConnell insisted on Tuesday that he’s still uneasy about the controversy-wracked Alabama Senate candidate Roy Moore, despite comments he made over the weekend that suggested the sexual misconduct against the Baptist judge were outside of his purview.

“There’s been no change of heart,” McConnell said on Tuesday, when asked where he stood on Moore’s candidacy. “I had hoped earlier that he would withdraw as a candidate, and obviously it’s not going to happen. If he were to be elected, he would immediately have an ethics committee case, and the committee would take a look at the situation and give us advice.”

Moore, a 70-year-old lawyer from Alabama’s sleepy northern hills, has been among the most incendiary figures in this year’s national political discussion. He previously served as the Chief Justice of the Alabama Supreme Court — a post he was removed from twice, once for refusing to take down a monument to the Ten Commandments he’d erected in the state courthouse and again for defying the U.S. Supreme Court’s 2013 ruling on same-sex marriage – and now he’s running for the Senate seat vacated by Attorney General Jeff Sessions. He handily defeated incumbent Luther Strange in the September primary, and he remains competitive in the general contest, scheduled for next Tuesday.

Moore had always been controversial — among other things, he has in the past compared homosexuality to bestiality — but a national scandal erupted in November, when a number of women alleged in the Washington Post that several decades ago, Moore had pursued sexual relationships with them while they were teenage girls.

The G.O.P. was swift to distance itself from him. On Nov. 13, McConnell, echoing a number of his colleagues in the Senate, called on Moore to exit the election. “I believe the women,” McConnell said then. He also floated the prospect of nominating a write-in candidate to supplant Moore.

But on Sunday, in an interview with This Week on ABC, McConnell appeared to waffle. “I’m going to let the people of Alabama make the call,” he said, when asked by host George Stephanopoulos if he believed Moore “should be in the Senate.” He was bombarded with questions on Moore at a weekly press conference with Senate Republican leadership on Tuesday.

“I’ve made my position perfectly clear,” he said. “Let me say it again: I had hoped that Judge Moore would withdraw from the race.”

He also noted that if Moore wins next week, “based on a 1969 Supreme Court decision, we would have no choice but to swear him in.”

McConnell’s remarks on Tuesday came a day after President Donald Trump formally endorsed Moore in both tweets and a phone call to Moore himself, in which he offered, as Moore later recounted, “his full support.” Trump will travel to Pensacola, Florida, a city less than 20 miles from the Alabama border, on Friday for a rally.

The Republican National Committee has since confirmed that it would renew its backing of Moore during the campaign’s final stretch, after ceasing its fundraising efforts for the candidate last month.

These pivots underscore the uncomfortable rift in Republican politics in the age of Trump. The Republican establishment finds itself in an awkward position: though their policy and political priorities often differ from those of the president, more often than not they find themselves needing to acquiesce to avoid alienating Trump’s base. Those Republicans who have publicly defied Trump — Sen. Jeff Flake of Arizona, for instance — have seen their popularity, and in turn their careers, crumble.

Other than Trump himself, Moore is perhaps the most prominent face of the populist, anti-establishment groundswell that has redefined conservative politics over the last two years. Should Moore win and hold onto his Senate seat, we can expect some awkward meetings between him and McConnell: Moore’s campaign messaging has railed against the Senate Majority Leader as a bête noire embodying the worst of establishment politics.

In a conversation with TIME on Nov. 14, shortly after the allegations of sexual impropriety against Moore surfaced, his campaign manager Bill Armistead accused McConnell of “working to the tune of 20 or 30 million dollars” to slander Moore in the Republican primary. (The Republican mainstream had backed incumbent Sen. Luther Strange, who took Sessions’ seat when he became Attorney General.)

“It’s politically motivated. It’s coming from those who don’t want Judge Moore in Washington,” Armistead said. “They’re false attacks on the judge and we’ll let the people decide if the judge is an honorable man.” 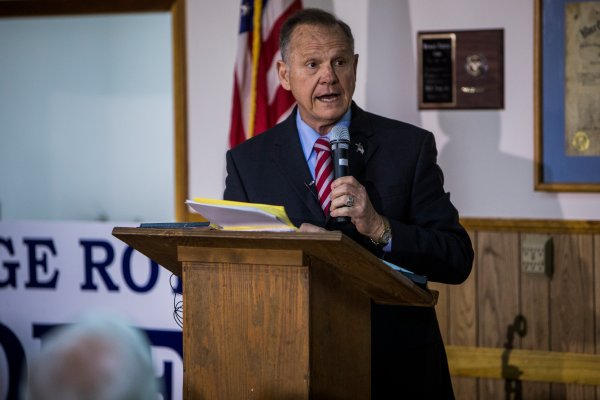 Roy Moore Co-Authored a Government Course Saying Women Are Unfit for Office
Next Up: Editor's Pick