John Conyers Says He Will Retire From Congress Amid Harassment Allegations

Rep. John Conyers said Tuesday that he is retiring from the U.S. Congress amid allegations that he sexually harassed former members of his staff.

In an appearance on a Detroit radio show, Conyers expressed gratitude for the support he’s received and again denied the veracity of the harassment allegations.

“I am retiring today and I want everyone to know how much I appreciate the support — incredible undiminished support I’ve received across the years, not only in my district but across the country as well,” Conyers told Praise 102.7 host Mildred Gaddis.

Conyers also announced that he was endorsing his son, John Conyers III, to replace him in Congress. That endorsement came in the wake of a New York Times report that suggested another relative of the 88-year-old Democrat would run for his seat.

“My legacy can’t be compromised or diminished in any way by what’ we’re going through now. This too shall pass,” the long-serving Congressman said. “My legacy will continue through my children. I have a great family here, especially in my oldest boy, John Conyers III, who I endorse to replace me in my seat in Congress.” He continued, “We’re all working together.”

The announcement from Conyers comes after conflicting calls on what the veteran Representative should do. While supporters in his hometown of Detroit have said Conyers should stay the course, his colleagues back in Washington have urged him to immediately resign.

On Monday, according to BuzzFeed News, many of Conyers’ supporters who came to a rally to support the Democrat felt that he had been unfairly judged. “You have a right to respond to your accuser and you have the right to have an independent body make a determination,” Wayne County executive Warren Evans said, according to the report. “Until that happens they’ve got nothing and this is wrong.”

Last week, House Minority Leader Nancy Pelosi called for Conyers to resign just days after citing the Congressman’s legacy on Meet the Press. She faced backlash for those remarks and later issued a statement saying that legacy should not excuse harassment.

She added, “No matter how great a legacy there’s no license to harass or discriminate. In fact it makes it even more disappointing.”

When asked about the harassment allegations on the radio show on Tuesday, Conyers said: “Whatever they are, they are not accurate. They are not true. I think they are something that I can’t explain where they came from.”

Earlier in November, BuzzFeed News reported that the Congressman had paid a $27,000 settlement to a former employee who had accused him of sexual harassment.The longtime Democrat has admitted to paying the settlement, but denies sexually harassing anyone. Last week, his accuser went against the terms of a non-disclosure agreement and broke her silence about the allegations. “Some of the things that he did ― it was sexual harassment, violating my body … propositioning me for sex,” Conyers former staff member Marion Brown said on NBC’s Today. “He has touched me in different ways and it was very uncomfortable and very unprofessional.

Others have also accused the Congressman of sexual harassment, including an ethics attorney who told the Washington Post he once summoned her to his office wearing only underwear. “I was pretty taken aback to see my boss half-dressed,” said Melanie Sloan. “I turned on my heel and I left.”

The allegations against Conyers have come at a moment of reckoning for the United States Congress. Congressional leadership has taken steps to show that they are taking the issue seriously, most recently mandating that every member and their staff undergo regular anti-harassment and anti-discrimination training. A bipartisan bill that would change the way complaints are handled has been introduced in both Houses. And a hearing on reforms has been scheduled for Thursday, Dec. 7.

Yet while allegations of sexual harassment have taken down celebrities, media executives, and others, members of Congress have not been similarly forced out. In an interview with TIME, Rep. Jackie Speier, who has introduced the Me Too Congress Act, said that should change. “When CEOs are fired because they’ve sexually harassed an employee, the board of directors doesn’t say, ‘well, we’ll leave it until the shareholders meeting,'” she said. “They take action and we’ve got to do the same thing.”

Conyers is currently being hospitalized in Detroit and spoke to the Mildred Gaddis Show from an undisclosed hospital. When asked if information about sexual harassment settlements that have paid by other member’s offices should be made public, Conyers said: “I think there should be a complete disclosure and revealing to all of the citizens of the country of what your federal legislators are doing or not doing.” 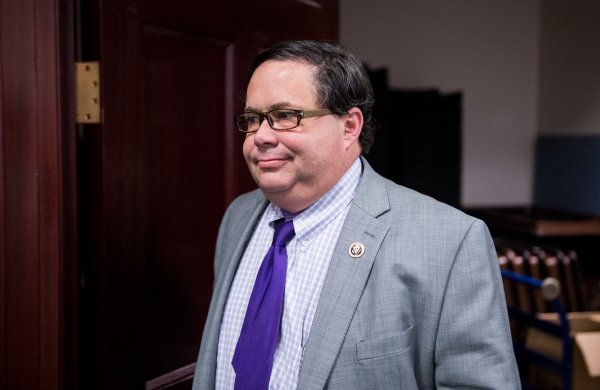 Congressman Says He Will Pay Back $84,000 Sexual Harassment Settlement
Next Up: Editor's Pick