Rose McGowan: 'They Really F--ed With the Wrong Person'

Rose McGowan doesn’t care if you like her or not. TIME recognized McGowan for by naming her one of the Silence Breakers, TIME’s Person of the Year, for speaking out about sexual assault and harassment. She has used her platform to shine a light on violence against women and give survivors, as she says, “permission to be angry”—likability be damned.

McGowan said earlier this year that producer Harvey Weinstein raped her in a hotel room when she was a young actor. (Weinstein has denied all allegations of non-consensual sex.) Since, the New Yorker has reported that Weinstein hired ex-Mossad spies at the firm Black Cube to spy on McGowan and make sure she wasn’t going to speak out against him. After McGowan and dozens of other actors came forward with stories of harassment and assault against Weinstein, he was forced to step down from his company.

McGowan spoke to TIME about her own experiences and how sexism in Hollywood shapes what we see on our screens and internalize about gender relations.

The conversation we’re having in culture right now is about #MeToo, but it’s also about a larger battle—like the Women’s March and the fight for women’s rights. You’ve really connected those things.

It’s completely tied together. Women’s rights are women’s rights. One of the things that woke me up was equal pay. I started thinking about it: Who is the leader of women? Take me to your leader. And there were no leaders. There are some in different factions, but I didn’t find a cohesive group. That’s what’s so great about the Women’s March and the convention coming together. It’s this feeling of unity. What I do with my work is, I give women permission to be angry. Because that’s our right. Because it’s an emotion. Because it’s been taken away from us. Because we’ve been silenced. I’m not interested in their cultural norms. I’m not interested in worrying in if I make people uncomfortable. I’m interested in stopping women and children dying—that’s what I’m interested in. Especially via rape culture.

When you were first getting into acting, what was your perception of the industry? Did you see it as sexist?

Everyone thinks it’s just Hollywood. It’s not Hollywood—it’s the world. Because it’s the number one propaganda machine for the world. I’m trying to cut the propaganda arm off. I’m trying to make people see what they’re watching, how they’re being given a mirror to look in that’s not the mirror they should be looking into. We’ve seen, with all the men falling and the many more to come, that these are the ones behind the scenes giving you the images of what you’re supposed to be, do and think. And we can all agree that they’re not the ones who should have access.

What does that do to people watching the content made by these men?

People need to understand that the content made for them is made up by a very narrow perspective. I know these guys. The dudes in yellow Lamborghinis, right? The ones everybody makes fun of. So why, if we’re making fun of them, do we allow them to have access to our mind’s real estate? I’m trying to fight a greater worldwide force. My focus isn’t Hollywood; my focus is using Hollywood as an example. Because what happens here does happen everywhere. It’s just a really concentrated and tense version here.

As far as equality goes, that’s a word that’s always really bothered me. Especially in Hollywood when people say, “I want a seat at the table.” I don’t want a seat at your table. I don’t find myself in any way equal to you. I think I’m superior. I think most of us are.

You’ve spoken out about your attacker many times in many different ways over a long period of time.

I’ve been speaking out about this man for twenty years. This monster specifically. I don’t like naming his name. Everybody knows it. I think some people get the faces and the names they deserve. But this process for me has been getting people ready to listen. I look at it as if I was human trafficked. But for a lot of money, for years, internationally. If you can have an agent, a manager, a lawyer or the monster negotiate how long your breasts can be seen for, and then they profit off it, is that not it?

How did you feel when the New York Times piece revealing your attacker’s history finally came out?

It’s intense. For the last ten months while I was juggling these pieces, I was also being sued or harassed. People don’t understand what it’s like to be terrorized, when all you’re trying to do is stop rape. I have ex-Israeli spies after me. I have monsters everywhere. In the last two years, I don’t trust anybody who’s inserted themselves into my life. I can’t. I can’t afford to because that’s really life and death for me at this point. They tried to silence us, and they burn us at the stake, and that’s what they do. But I won’t let them. Most of my work—the movie I directed, Dawn; my upcoming book Brave; the album I have coming out—all these things, it’s like I’m making it for posterity. To be studied because, these people, at the end of the day, I think they would like to kill me.

How does being assaulted change you as you progress through life?

I had to go finish filming a movie for the rapist after I was attacked. And for seventeen years of my career, everything that came out of my mouth was something a man wrote for me to say. Why am I leaving my body to play a two-dimensional version of myself? For a man’s pleasure. For the man shooting me, for the man editing me, for the man directing me, for the man producing me, for the man selling me. It’s really a sick industry. I think people need to see where they’re getting their content from. Notice the messages. Notice that every time you see a laundry detergent commercial, it’s a woman. Notice that every time you see people of many races in a commercial the black guy is the sidekick. They reinforce these messages. Just like how Fox News has done a great job in media portraying people of color as the dangerous ones. But I think we can all agree—they look like Harvey Weinstein. There. I said his name.

How did people respond to you once the articles came out?

I had amazing support the two days following the release of the Times piece. Dead silence, of course, from people in Hollywood. Jessica Chastain eventually retweeted something a couple days later. But it was deafening. And I never expected any bravery from this place. They’ve never been brave.

The support of people around the world, and also for me the data—the amount of people sharing their stories with me—is so intense, especially as all of this is incredibly triggering for me as well. People forget that there’s a human behind this. Someone who is very hurt and wronged. But that’s okay. It fuels my fire. They really f—ed with the wrong person.

What needs to change in the culture going forward?

There needs to be a hashtag: #IDidIt. I did it more than once. I did it many times. If you can’t tell that you’re a sexual harasser; if you can’t tell that you abuse women; if you can’t tell that you abuse your power; you just choose not to. Because they’re never gotten in trouble and there’s never been culpability. I get a lot of guys that are like, “I’m one of the good guys.” To which I simply say, “Be better.” Because the state of the world isn’t so hot. The way to keep pushing this forward is to actually reframe things and understand that our language—sexual harassment, sexual misconduct, domestic violence—it all comes from men. How dare you tell me what’s rape and what isn’t? How dare you put limits on when I can report? How dare you put in your minimizing terminology to make something so massive so small? It’s time to say that. We always say “people,” but it’s not—it’s men. Own your s—. And then women need to look at how they aid and abet and how they play along with a power structure that doesn’t benefit them whatsoever.

What is your advice to young women?

My advice to all women: Know your power. Know your worth. Don’t let them trick you. They’re going to start around age nine. People, especially need women, need to understand they’re not equal to—they’re more than. Once they know that, they can fly. The power structure wasn’t set forth to benefit you. If you’re white and in the 1% you get what—77 cents to the dollar? If you’re a black lesbian you’re at 46 cents. Why not fight back? What else are we doing? 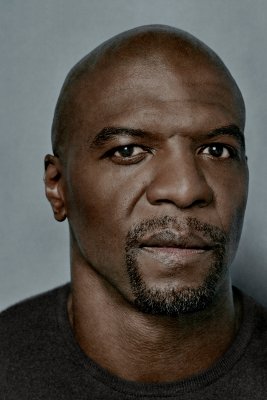 Terry Crews: 'Men Need to Hold Other Men Accountable'
Next Up: Editor's Pick