The 1995 Law Behind President Trump's Plan to Move the U.S. Embassy in Israel to Jerusalem

Every six months for more than two decades, U.S. presidents have had to decide all over again whether to move the U.S. embassy in Israel from Tel Aviv to Jerusalem. Since the Clinton administration, they decided each time to keep the embassy where it is, seeking not to throw a wrench into delicate Middle East peace talks. On Tuesday, however, after signing a waiver putting off the move in June, President Donald Trump informed the Palestinian Authority’s President Mahmoud Abbas that he’s going to recognize the contested holy city as Israel’s capital and begin the process of moving the embassy there.

That decision, which experts fear will spark unrest throughout the Arab world, represents the conclusion of a process that began in 1995, with the passage of that year’s Jerusalem Embassy Act. The law required the U.S. to move the embassy from Tel Aviv to Jerusalem by a set deadline, but conceded that the move could be put off for six months at a time as long as the President “determines and reports to Congress in advance that such suspension is necessary to protect the national security interests of the United States.”

The reasons why such a waiver might be needed are not much different today than they were in 1995.

That May, TIME reported in the international edition that, though both the Clinton Administration and Israeli government “support the move to Jerusalem in principle, they would prefer to see the peace process more stabilized before confronting the explosive issue of Jerusalem.” The effort led by Senate majority leader Bob Dole to make the move mandatory came “at a particularly raw moment,” the magazine added. Here’s how TIME described the many years of political history that led up to that point:

As Trump did, President Bill Clinton also came into office calling for the embassy to eventually be moved to Jerusalem, even as he actively worked to kill Dole’s bill. “From a policy perspective, this debate was happening shortly after the celebrated Taba Agreement wherein Israel and the Palestinians had just agreed on interim governance arrangements for the West Bank and Gaza,” Foreign Policy has observed. “Hope was high that this momentum would lead to a lasting peace, and the Clinton administration argued that a ‘premature focus on Jerusalem’ could ‘undermine negotiations and complicate the chances for peace[.]’”

Yet some saw the 1995 law and its implementation as having more to do with domestic American politics than the Middle East peace process. “This is all about vote counting in the coming U.S. elections,” Sa’eb Erakat, the Palestinian minister for local government, told TIME in 1995, adding that he believed supporting the bill would help Dole fundraise with Jewish groups in the 1996 presidential race. And as a TIME article later that year noted, Dole had in fact opposed the bill “until this year, when he’s running for President.”

In 2017, the potential consequences of recognizing Jerusalem as the capital remain the same: the risk of sparking protests in the Arab world and jeopardizing the standing of the U.S. as a broker in coming peace talks. One thing that’s different about 2017’s political climate, however, is that there’s “a window of opportunity that didn’t exist before,” as Israel’s ambassador to the U.S. Ron Dermer explained to Politico, for the two sides share security concerns about Iran. Whether that view holds true remains to be seen, but peace talks are planned for early 2018. 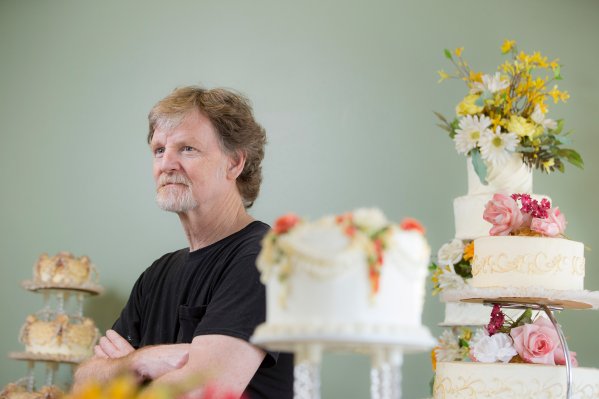 Masterpiece Cakeshop Isn't the First to Bake Larger Meaning Into Wedding Cakes
Next Up: Editor's Pick