It’s easy to tell tales about the near future—until it catches up with you. That’s the problem Black Mirror faces in its fourth season, which hits Netflix on Dec. 29. The twisty sci-fi anthology series, which first aired in the U.K. in 2011, still shares stories about technology and how it affects relationships. But imaginative, prescient stories are harder now. Reality in the late 2010s has been more creative in devising narrative turns than fiction could. As for prescience, if many are convinced there’s no future, who cares what the future’s tech looks like?

Sci-fi can serve as an escape when the future feels dark, but it can also seem a bit frivolous when its aperture is narrow. Several of the six episodes in the new season of Black Mirror stick to the show’s blueprint, focusing on how a specific technology affects a specific person or few people. The implications are meant to be chilling. For example, a technology that allows a parent to censor what her child sees produces a blinkered and angry young adult. But in the end, these stories end up seeming both more scolding than ever and perversely assuaging. In the near future Black Mirror depicts, there will still be helicopter parents, but they’ll leave the rest of us basically alone. An episode in which humanity is on the run from a dangerous technology we seem to have created ourselves is sketchily-drawn enough to be a momentary sort of comfort, too. If Charlie Brooker, the show’s seemingly endlessly inventive creator, can’t come up with a compelling way we’d end ourselves, maybe things aren’t so bad.

Of course, Black Mirror is in our world, sort of: “This isn’t an episode. This isn’t marketing. This is reality,” the show’s official account tweeted on election night 2016. But Black Mirror, despite one previous episode positing a future in which a literal cartoon character rose to political prominence, was generally stronger as a Twilight Zone-esque series of parables than a comment on what is actually happening in our world. Its statements resonated more sharply in a duller era. If the show wants to position itself as entirely of the moment, it has more work to do in meeting its viewers where they are, at a place where concern over what we’re doing to each other extends beyond implanted brain-modification technologies—and beyond the individual.

The season has bright spots: An episode about a dating technology whose control over its users can’t seem to erase the possibility of a real connection, scans a bit like an attempt to repeat the success of the dating-in-virtual-reality opus “San Junipero.” That episode’s depiction of two women whose romance pushed past the boundaries of time, reality and life in the closet provided Black Mirror a breakthrough moment of sorts, as even the most casual of fans swooned to the uncharacteristic earnestness. This time, the twist was the miracle of love. It was an episode that simultaneously engaged issues of the heart and the way technology has reshaped possibilities of what life can look like for all of us. “Hang the DJ” is no “San Junipero,” but the show may as well copy from its own best work.

But one episode this season has the imaginative power of Black Mirror at its best: “U.S.S. Callister.” The 1960s space serial features a large cast in a Star Trek-like fictional universe, all bubblegum colors and bright responses to the all-knowing Captain, who end up facing down existential threats. This episode makes the universe of Black Mirror seem more ambitious, and not merely because its characters are hurtling through space. It works because the show’s verve and its anger are reserved for something that’s happening right now—something that viewers understand as a threat more potent than imagined mechanical predators or mind-controlling implants.

In depicting not just a male villain consumed by his misogyny (Jesse Plemons) but the women who face him down (among them Cristin Milioti and Michaela Coel), the episode of a pessimistic show gives us not just a catastrophic future but real heroes fighting back. It also includes what makes people good, not just what’s making them worse. “U.S.S. Callister” feels ambitious and boundless, a rarity for the series. On a season in which Black Mirror drifts yet further away from many viewers’ real sense of dystopia, this dispatch from deep space will remind you of science fiction’s power to cut to the very heart of modern concerns. 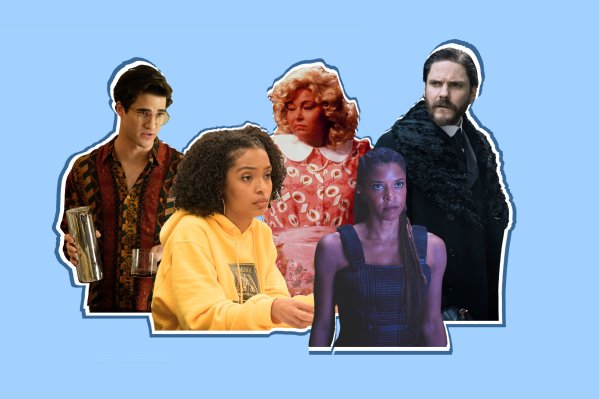 Here Are the New TV Shows Premiering in 2018
Next Up: Editor's Pick