Here's What Stephen Colbert Wanted to Ask Louis C.K. on The Late Show

Louis C.K. cancelled his scheduled Late Show appearance on the day before the New York Times published a report in which five women publicly accused him of sexual misconduct. But if the comedian hadn’t pulled out of the November interview, here’s what host Stephen Colbert says he wanted to ask him.

During a live conversation with Samantha Bee on Saturday to benefit Montclair Film, Colbert explained the roundabout way he was planning on addressing the then-rumors about C.K.’s inappropriate sexual behavior. C.K. has since confirmed that the allegations brought against him are true.

“The way I was going to approach talking to him about this subject, which I knew he didn’t want to talk about, was people in the movie talk about rumors of sexual impropriety by one of the characters,” Colbert said, referencing C.K.’s cancelled movie, I Love You, Daddy, which centers on a relationship between a 17-year-old girl and a 68-year-old man. “At like minute 42, one of the characters says, ‘Can you separate the artist from the rumors about him?’ How would you answer that question? That was going to be my tack.”

However, Colbert also admitted that he hadn’t known that the rumors about C.K. were anything but rumors. “I feel dumb,” he told Bee. “I didn’t know about Louis. I didn’t even know about Cosby. And that’s dumb.” 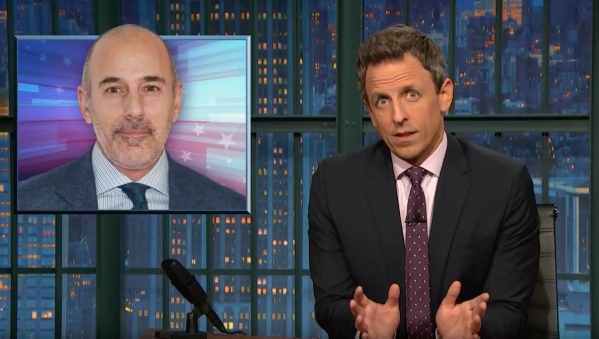 Seth Meyers Has a Cutting Message for Matt Lauer Over Sexual Misconduct Allegations
Next Up: Editor's Pick