Sometimes people say to me, “The movies are so bad this year!” and I deflect. Never, in any year, do I say to myself, “The movies are so bad this year!” I never have trouble finding enough to love. But even if, in some mythical year, I were to feel true despair over the state of all moviedom, I would still know that actors are always there for me. If a director gives a movie its overall shape and tone, actors are the ones who breathe life into that vision. Here are some of my favorite performances, a mix of lead and supporting, of 2017:

There’s both flinty resolve and sly, whisker-licking humor in Streep’s portrayal of Washington Post publisher Katharine Graham in The Post. Graham, who suddenly found herself having to learn how to play hardball in a man’s world, was a woman both of her time and ahead of her time. Streep captures the complexity of that dance, with every ladylike step and shrewd sidelong glance.

Although journalists are often heroic figures in the movies, they’re rarely very glamorous in real life. In Steven Spielberg’s The Post, Odenkirk, as Washington Post journalist Ben Bagdikian, captures that valiant ordinariness perfectly. Even his vaguely stooped carriage says “Just get the story”—and when he does, you feel nothing but joy.

In Todd Haynes’ radiant and sweet Wonderstruck, Simmonds plays Rose, a 12-year-old deaf girl living in Hoboken, N.J., in 1927. Simmonds is deaf herself, and to watch her face—to see how, as Rose, she virtually breathes in the world around her, as if sounds and visuals were color values you could absorb into your very being—is to step over a border you perhaps didn’t even know existed.

Comedian Haddish—from The Carmichael Show and Keanu— is Dina, the wildest girl of all in Malcolm D. Lee’s Girls Trip, and the one you’d most like to hang with. Her smile is as cheerful as a spilled bag of Skittles, but it’s delightfully naughty too. She elevates go-for-broke raunchiness to an art form.

Smith gives us two terrific performances this year. In Michael Almereyda’s Marjorie Prime, she’s a widow with dementia who pieces bits of her life together in her last days by quizzing her husband (Jon Hamm), an artificial-intelligence creation; her eyes’ misty glow reminds us that the things we’ve forgotten are as much a part of us as those we remember. And in Greta Gerwig’s Lady Bird, she’s pure delight as a radiant, generous nun with a great sense of humor. With her as his bride, Jesus is one lucky guy.

Laurie Metcalfe in Lady Bird
A24

Being the mom who’s mostly responsible for holding a family together often means being the killjoy. And that’s the job of Metcalf’s Marion in Lady Bird: she’s the one who always counts the money, and the one who always has to say no. Metcalf, a longtime theater actress who may be best known for her role on TV’s Rosanne, shows us the sense of isolation behind Marion’s thorniness—and how much she’d prefer to say yes.

As the long-suffering motel manager Bobby in Sean Baker’s The Florida Project, Dafoe—driven near crazy by the residents of the property he tends, especially Brooklynn Prince’s pint-size scamp Moonee—projects an aura of careworn grace. When he cracks a crabby, reluctant smile, it’s as if the heavens had opened.

In Call Me by Your Name, Hammer’s Oliver is the casual American summer visitor who throws Timothée Chalamet’s Elio for a loop. Lanky and confident, with a Pepsodent smile, he’s part rakish paramour, part free-spirited escape artist. Yet Hammer signals Oliver’s veiled vulnerability beautifully. Even though he’s older and presumably wiser than Elio, you suspect that of the two, he’s the one who will end up suffering more for love. You never catch him brooding, but that doesn’t mean he’s not hurting.

When, exactly, does adolescence flip to adulthood? The moment is as fleeting as the silvery flash of a minnow. Yet it’s that moment that Luca Guadagnino captures in his lush, ardent coming-of-age romance Call Me by Your Name, and Chalamet, one of his two lead actors, gives that almost inexpressible point of passage a human face. As 17-year-old Elio, Chalamet is equal parts youthful guilelessness and premature masculine swagger, as if he were just trying adulthood on for size, not yet sure he wanted to commit. It’s a lovely performance, as casually intense as a light summer sunburn.

Saoirse Ronan in Lady Bird
A24

In Greta Gerwig’s bittersweet coming-of-age comedy Lady Bird, Ronan plays Christine, a Sacramento teenager who’s had it with everything: her complex, cranky mother; her low-on-the-totem-pole social status; her really-not-so-bad Catholic school. But as Ronan plays her, you feel for Christine every minute, even when she’s being totally impossible. Beneath all that free radical exasperation, her face is radiant, open and alive. 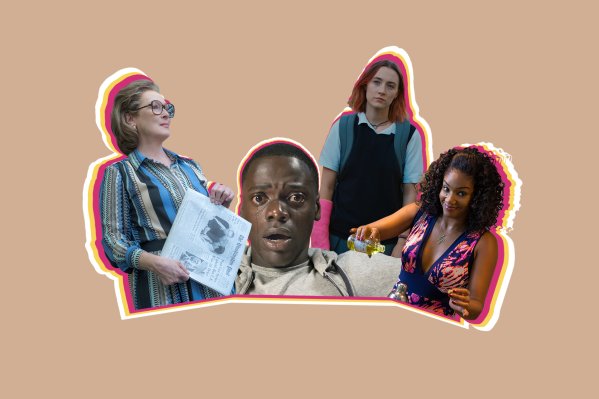