‘We Must Protect Our Girls.’ Will Pakistan Finally Vote to End Child Marriage?

Aisha was 14 years old when she married a man almost a decade older in a match arranged by her parents. “I was just thinking I would have the opportunity to wear good clothes and high heels,” Aisha, now 35, tells TIME.

Living in Pakistan’s northwest Mianwali district, the marriage festivities made her feel glamorous, even though she would no longer attend school and her elders had forged a marriage certificate saying she was 18. Soon after the marriage was solemnized, however, the abuse from her husband began: Age 16, Aisha’s pregnant body was hurled against a cupboard, leaving her covered in bruises. Her husband later burned his daughter’s hand on a heater and dropped icy water over his wife’s head as she slept. “He was torturing me in small, cruel ways,” says Aisha, who asked TIME not to use her real name for safety reasons. Her husband sought a second wife, but ordered Aisha to initiate a divorce first, fearing the risk to his reputation in the family.

Pakistan has one of the highest numbers of child brides in the world. Almost a quarter of girls marry before the age of 18, according to a recent poll by Gallup. Although the minimum age limit for marriage is set at 18 for men, women can legally marry at 16 in the South Asian country of more than 200 million. However, some lawmakers are taking action following longtime lobbying efforts of women’s and child rights groups, and have proposed amending the legal age of marriage for women to 18. On Dec. 11, parliament will vote to end child marriages nationwide under the Child Marriage Restraint (Amendment) Bill 2017.

“In a country where people are not allowed to drive or vote before the age of 18, why should marriage be the exception?” Senator Sehar Kamran, one of the main supporters of the bill, tells TIME. “Similarly, why protect only our boys and not our girls under the guise of “values” or “culture?”

Read More: Child Marriage Survivor: I Was Introduced to Him in the Morning and Handed Over That Night

However, the bill faces opposition from conservative religious groups who contend that girls as young as 15 can wed. In October, the Council of Islamic Ideology, an advisory body that judges whether certain bills are compliant with Islamic religious law, characterized raising the age from 16 to 18 as “anti-Islamic,” on the grounds that girls who have undergone puberty are of marriageable age. Three years ago, the same Council advocated allowing girls as young as nine to marry if signs of puberty were evident, drawing the ire of rights’ activists around the country.

“The argument that it is un-Islamic is invalid,” counters Anbreen Ajaib, executive director of Bedari, a nonprofit working on combating child marriages in Pakistan. “The Council of Islamic Ideology never gets involved in anything to do with Islam, it just becomes active when it comes to women,” she says. While the Council’s recommendations to lawmakers are not legally binding, the 55-year-old body serves a barometer for potential backlash by religious conservatives in the Islamic republic.

In Pakistan, like its South Asian neighbors Bangladesh, India, and Nepal, early marriage is prevalent, especially in rural communities. Women who enter wedlock before the age of 18 have a higher risk of maternal or infant death or health complications: Eight percent of Pakistani women aged 20 to 24 delivered a baby before the age of 18, and every 20 minutes, a Pakistani woman dies from childbirth or complications in pregnancy. “The children of young mothers are more likely to die at an early age because their bodies are not ready, nor are they psychologically ready,” Ajaib says. In Pakistan, 64 infants die per 1,000 births — the highest rate of infant mortality in Asia, and worse than war-ravaged Afghanistan or Yemen, according to figures from the World Bank. The high maternal and infant death rates in Pakistan have a close link to early pregnancy and marriage, says Sadia Hussain, the executive director of the Society for the Protection of the Rights of the Child.

For child brides, the risk of domestic violence, early pregnancy, and marital rape increases significantly, while many drop out of school and have little employment opportunities, according to UNICEF. Aisha, who faced heavy bleeding during her second pregnancy, regrets the physical and emotional toll the early marriage took on her. “It should have been with someone the same age, so that I could have shared my life with them,” she says. “I wanted to grow old together with this person, and be at the same mental level as them. At least then I could have had a chance at a happy marriage.”

Multiple factors, including poverty, lack of education, and deeply entrenched patriarchal customs, can impel families to arrange early marriages. In 1929, the British passed a law restraining underage marriage in colonial-era Pakistan, raising the legal age to 14 for girls and imposing a 1,000 rupee fine (around $10) for violations. Since this period, lawmakers have sought to institute checks on child marriage through amendments to both the Child Marriage Restraint Act 1929 and the Penal Code, which was updated in February 2017 to criminalize forced marriages of underage brides. A punishment of five to ten years was imposed, along with fines of up to one million rupees ($9,500). However, these strict penalties only apply when a marriage is classified as “forced” and the bride is under the current marriageable age of sixteen. For this reason, activists have pushed for an update to the Child Marriage Restraint Act itself, to widen the scope of the law.

Read More: How One Indian School Is Working to End Child Marriage

Pakistan has already achieved some successes in fighting early marriage: the southeast province of Sindh proscribed child marriages in 2014, levying prison terms of up to three years, along with a 45,000-rupee (around $427) fine. And in Pakistan’s most populous Punjab province, a six-month jail sentence and $475 fine was approved under a 2015 bill. However, a lack of enforcement has done little to stop early marriage in rural Pakistan, where it is most commonly practiced. The new bill would revise the marriageable age of women to 18, and increase punishment to a minimum 100,000 rupee fine (around $950) and a two-year jail term. Those who would face punishment under the law include the adult husband, the child’s parents or guardians, and the person who solemnizes the wedding. In a country where underage marriage is sometimes used as a means to reduce the burden of childcare on destitute families, the stiff financial penalty might dissuade some from arranging early unions, activists say.

Previous attempts to raise the national minimum marriage age for women to 18 have failed. In October, parliamentarians scuppered a draft bill, pointing to Muslim theologians who argued that Islam’s lack of an explicit age for marriage indicated that early unions could be approved. Likewise, last year, another proposal was derailed by clerics who labeled it “blasphemous.” Despite these setbacks, a few weeks ago, the Child Marriage Restraint Bill was approved by a Senate committee, paving the way for this month’s upcoming vote. If the bill passes the Senate floor, it will head to the National Assembly for approval. If it’s rejected, activists and lawmakers will return to the drawing board, Kamran says. “We must protect our girls,” the senator tells TIME.

Read More: Why Is It So Hard to Combat Child Marriage?

Senator Kamran is optimistic about the prospects ahead for reform. “We are keeping our fingers crossed,” she says, but cautions “Changes don’t come overnight.”

For Pakistani women like Aisha, whose education was cut short by a failed early marriage, the legal change would prevent the setbacks faced by young brides like herself. Now divorced, she is determined not to allow the same fate to befall her young daughter: “A 14-year-old child can’t make a decision about marriage,” Aisha says. “We don’t understand what a husband or marriage is.” 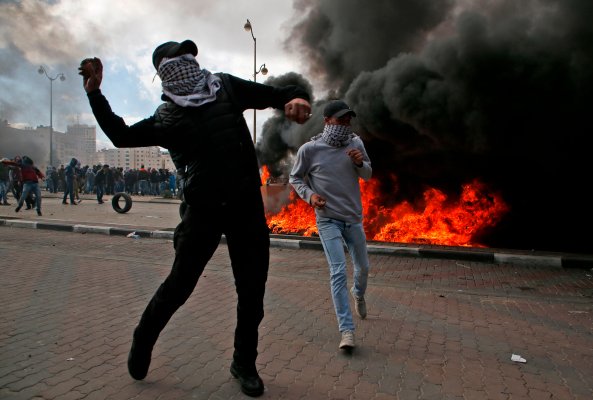 Hamas Calls for Intifada Against Israel
Next Up: Editor's Pick