How Republicans Overcame Their Doubts on Tax Reform

At the end of one of the year’s most exhausting weeks in Congress, Senate Republicans finally voted on Friday night to pass their long-awaited tax reform package.

The narrow vote — 51 to 49 — came after a harrowing daylong behind-the-scenes legislative marathon that began on Thursday evening, when it became clear that the G.O.P. lacked the support to pass the bill from three key holdouts in their own caucus.

As they headed into Friday, Republican leaders faced concerns from two deficit hawks, Sens. Bob Corker of Tennessee and Jeff Flake of Arizona, and questions from Sen. Susan Collins of Maine, who wanted to make it easier for taxpayers to write off their state and local property taxes and healthcare expenses.

In the end, only Corker voted against the bill. A longtime deficit hawk who has recently become a strong critic of President Trump, Corker is not running for reelection next November.

“I. .. continue to believe it would have been fairly easy to alter the bill in a way that would have been more fiscally sound without harming the pro-growth policies,” he said in a statement announcing his decision. “I am disappointed. I wanted to get to yes.”

Flake, who had been just as vocal in his criticism of the bill in the weeks leading up to the vote, proved more amenable to compromise. He had staunchly opposed the bill’s affects on the deficit — taking particular issue with its “expensing” provision that allowed businesses to write off their assets when paying their taxes, costing the government an estimated $85 billion in unearned revenue.

In the conversations that began Thursday night and continued into Friday, Flake partly won this fight: the provision will last for five years, and then will be tapered out over the following three.

But the outspoken Arizona lawmaker — another Trump critic who is not seeking reelection next fall — did not stop there. Flake has made it clear in recent weeks that he will capitalize on his political leverage during his remaining year in office, particularly on issues like immigration. On Friday, he did just that.

His vote for the tax bill, he said on Friday, was conditional on a commitment from both Republican leadership and the White House to secure a legislative replacement for Deferred Action for Childhood Arrivals, the Obama-era executive policy that protects from deportation many undocumented immigrants who arrived in the U.S. as children. (Trump announced in September that he would be ending the policy, and Congress’ attempts to replace it have so far gone nowhere.)

Flake secured this compromise in two phone calls with Vice President Mike Pence: one on Thursday night that lasted half an hour, and a shorter conversation on Friday morning.

“”I’ve always been convinced that the president’s instincts on DACA are better than the advice he’s been getting,” Flake said on Friday. “This is one area where I do believe that’s the case. I think we can work with the administration on that.”

Collins, meanwhile, teased reporters until Friday afternoon, when she announced her support of the bill. A moderate Republican who has been a major obstacle in the G.O.P. fight to repeal Obamacare, said in a statement that Republican leadership had pledged to avoid the cuts to Medicare that previous versions of the bill had relied on to fund its costs. Her two aforementioned demands — deductions for state and local tax deductions and healthcare expenses — were also met.

“As revised, this bill will provide much-needed tax relief and simplification for lower- and middle-income families, while spurring the creation of good jobs and greater economic growth,” Collins said in her statement.

A revised version of the bill, totaling 479 pages and still marked up with handwritten marginalia, made it to lawmakers early Friday evening. After several hours of prolonged debate, Republican Senators finally began voting on amendments to the bill shortly after 10 p.m. — only after Senate Minority Leader Chuck Schumer, following a blistering invective against the bill delivered on the floor, introduced an unsuccessful motion to adjourn until Monday to allow lawmakers to “first read and then clean up this awful piece of legislation.”

“Historians will mark today as one of the darkest black-letter days in the long history of this Senate,” Schumer said. “Once hailed as the world’s greatest deliberative body, as a beacon of American democracy and the envy of representative governments around the world, the Senate seems to have abandoned those qualities in a rush to pass a bill that no one is proud of.” 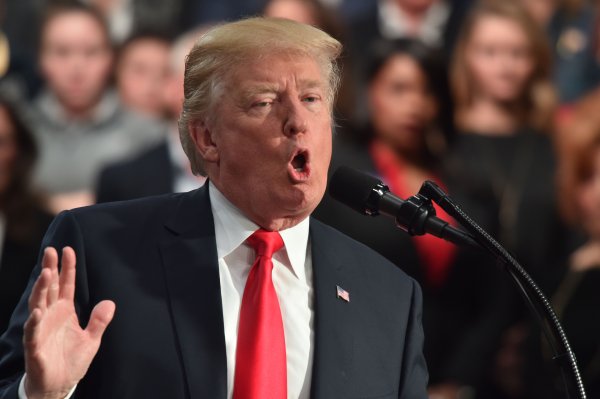 3 Big Ways Donald Trump Would Personally Benefit from the GOP Tax Plan
Next Up: Editor's Pick