Inside the Courtroom Where Michael Flynn Pleaded Guilty

Decked in a navy suit and striped tie, Flynn stoically acknowledged that he had told the FBI false statements about his contact with then Russian Ambassador Sergei Kislyak in December 2016 and pledged cooperation with the Special Counsel Robert Mueller, who is helming the investigation into possible collusion between Russia and the Trump campaign in the 2016 election.

The hearing lasted under an hour, but the room was filled to capacity, with outstanding attendees directed to the overflow room. The line to enter the courtroom where Flynn would plead guilty extended nearly an entire hallway.

The federal prosecutors’ presentation in the courtroom also included acknowledgements that Flynn discussed his contact with the Russian ambassador with an unnamed, senior member of President Trump’s transition team. It also stated that on March 7, 2017 he had made false statements when he filed documents pertaining to the Foreign Agent Registration Act, but no charge for that was included.

Flynn’s responses to the judge were short and clipped. “Yes,” he said when the Judge asked him if he had discussed his guilty plea with his attorneys. “Yes, your honor,” he said when he was asked if he understood all the possible consequences of his sentencing. (The guidelines and ultimate punishment is still to be determined).

His voice dipped slightly, at least according to the audio provided to the overflow room, when he was asked specifically what he was aware of regarding his possible sentencing, but it remained steady throughout.

He left the courtroom stone faced, accompanied by his attorney. The two went into an elevator, setting off a frenzy among the press, who rushed down the stairs to try and catch them. But they never appeared.

Instead, Flynn released a statement through his attorney claiming those who alleged he had committed treason were wrong, but he acknowledged he had made mistakes.

“The actions I acknowledged in court today were wrong and through my faith in God I am working to set things right,” he said. “My guilty plea and agreement to cooperate with the Special Counsel’s office reflect a decision I made in the best interests of my family and our country. I accept full responsibility for my actions.”

Here is his full statement: 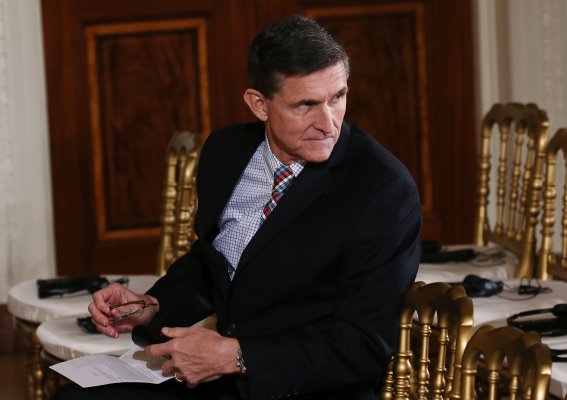 Everyone in Donald Trump's Orbit Who Has Been Charged by Robert Mueller
Next Up: Editor's Pick