This Supreme Court Case Is About Cake. But It Could Change LGBT Rights

LAKEWOOD, CO - SEPT 1: Jack Phillips stands for a portrait near a display of wedding cakes in his Masterpiece Cakeshop in Lakewood, CO on Thursday, September 1, 2016. Jack Phillips is owner of Masterpiece Cakeshop in Lakewood, Colo., and has a case before the Supreme Court. He is one of the bakers who does not want to bake wedding cakes for same-sex couples, saying it violates his religious beliefs, and has been found in violation of Colorado law. (Photo by Matthew Staver/For The Washington Post via Getty Images) Slug: JACKPHILLIPS
The Washington Post—The Washington Post/Getty Images
By Elizabeth Dias

Three men will face the Supreme Court of the United States on Dec. 5 to settle a dispute over a wedding cake. David Mullins and Charlie Craig met Jack Phillips when they walked into his Colorado bakery, Masterpiece Cakeshop, five years ago and asked him to bake a cake for their wedding reception. Phillips refused, arguing that he morally opposed gay marriage. The Colorado Civil Rights Commission sued Phillips for discrimination. But Phillips appealed all the way to the Supreme Court.

Phillips’ wedding cake case has become somewhat of a cause célèbre for conservative Christians across the country.

The religious right lost its cultural fight against gay marriage the day the Court legalized it nationwide in 2015. But social conservatives like Phillips are working to carve out a legal exception for their right to object. The Alliance Defending Freedom, a top conservative Christian legal firm in Washington, has backed Phillips’ wedding cake case, and is making the argument that it is fundamentally not about LGBTQ discrimination but about free speech.

The religious right’s protest has reached a tipping point. Social conservatives have long rallied around the theoretical idea of a Christian wedding vendor standing up against what it sees as a liberal gay marriage crusade. Now, they have their chance. Phillips’ wedding cake case is the next push for a religious exemption after Hobby Lobby’s successful protest of the Affordable Care Act’s contraception mandate. And since the Department of Justice sided with Phillips in September, they have the Trump Administration’s backing.

“It is the other side that is engaged in campaign litigation,” says Kristen Waggoner, the ADF lawyer representing Phillips. “They made a very poor choice here.”

The conflict may have risen organically, but it has become central to the religious right’s trajectory. Phillips argues his case is not about gay marriage, but about freedom of expression, as he refuses to create cakes for all things he morally opposes, including Halloween, anti-America events and bachelor parties. He represents the religious right’s strategy “to find the most sympathetic victim of government action that is assaulting religious belief and conscience and put a compelling face on it,” says Ralph Reed, Faith and Freedom Coalition founder.

“You don’t have to necessarily buy into the religion argument,” says Reed. “You can just believe that you are compelling people to participate in a form of expression that is not their own.”

The left has been building a compelling story around its plaintiffs too. Craig and Mullins are arguing for protection under anti-discrimination laws, and they fall in the line of recent Supreme Court gay rights giants. Edith Windsor overturned a key section of the Defense of Marriage Act. Kris Perry struck down California’s same-sex marriage ban. Jim Obergefell made gay marriage legal nationwide.

“A loss at the Supreme Court could open the door to many forms of discrimination that have long been outlawed in our society,” Mullins says. “Could a hotel owner refuse to rent a room to an interracial couple because their religious belief believes that the races should not mix, or could a business owner refuse to hire a single mother because their religion believes that mothers should be married?”

Religious objectors have bubbled up across the country over the past decade. None have been victorious, as lower courts have routinely ruled objection to be sexual orientation discrimination. The New Mexico Supreme Court ruled against a wedding photographer who refused to shoot a same-sex wedding in 2006. Oregon ordered a Christian cake baker to pay $135,000 in damages after it refused to sell a wedding cake to a lesbian couple in 2013. The ACLU sued a florist in Washington in 2015 for refusing to sell an arrangement for a gay customer’s wedding.

Phillips’ wedding cake case comes at a new cultural moment in America. He has the backing of white conservative Christians, whose political power has been rising with Trump. Half of white evangelicals favor allowing small businesses to refuse services to gay people, according to a June survey from the Public Religion Research Institute, unlike three in ten Americans overall. Evangelist Franklin Graham urged evangelicals to pray for Phillips to win. Former Arkansas Gov. Mike Huckabee touts Phillips on his Trinity broadcasting network show. Tony Perkins of the Family Research Council has said he is more optimistic that Phillips will win with Trump’s justice Neil Gorsuch on the bench. ADF’s public financial support has jumped from $36 million in 2011 to $50 million in 2015.

The right has also learned from the left’s success.

“Those on the left have been overall more effective at telling stories to illustrate principles,” Waggoner says. “At ADF, we are very intentional about telling the stories of our clients because they matter.”

Phillips’ legal strategy is to make the wedding cake case about speech and artistic expression. Artists cannot be compelled to make art for a religious ceremony, ADF says, and its case defends a lesbian printer who doesn’t want to print an anti-gay shirt. “There is a campaign to not just have same sex marriage recognized, but to crush those who disagree,” Waggoner says.

Gay rights advocates say all that misses the point. For the ACLU, Phillips is arguing for a constitutional right to discriminate. At periods of cultural change, as during the Civil Rights Act and legal advances for women, arguments for exemptions routinely emerge, says ACLU’s Louise Melling who is representing Mullins and Craig.

“The question is whether you can show someone to the door,” she says. This time, she says, “the sign would be, ‘Wedding cakes for heterosexuals only.’”

The Court won’t likely decide the wedding cake case until next summer, and court watchers expect a split bench. When the court hears the case on Dec. 5, most eyes will be trained on Justice Anthony Kennedy, whose majority ruling in the Obergefell case legalized gay marriage in 2015. For now, both sides can agree on one thing: constitutional rights are at stake. It’s just a matter of whose. 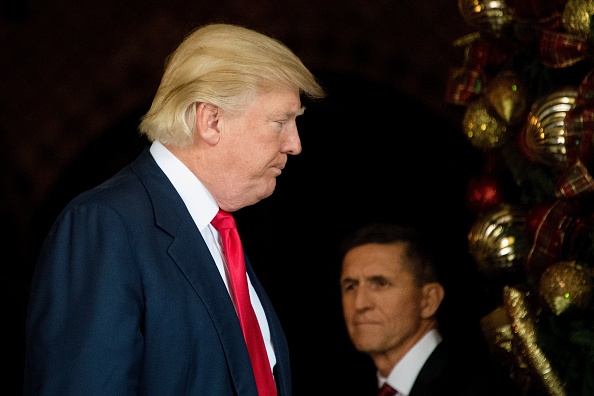 'I Think It's a Shame.' President Trump 'Feels Very Badly' for Michael Flynn
Next Up: Editor's Pick