U.K. Reverend Sparks Outrage After Telling Christians to Pray for Prince George, 4, to be Gay

An Anglican minister has sparked outrage after calling for Christians to pray for Prince George, who is four years old, to grow up to be gay, in order to advance the cause of gay rights in the Church.

The minister, Rev. Kelvin Holdsworth, is known for making controversial statements, however speculating about the sexuality of a child to make a political point proved too much for many people.

“To use prayer as a mechanism for wishing this on Prince George is an unkind and destructive thing to do,” Gavin Ashenden, a Christian Episcopal Church missionary bishop, told the BBC. “It doesn’t have the prince’s best interests at heart, but uses him as a gender-political football.”

“Prince George is four years old,” wrote Twitter user MadWorldOfSam. “Praying for someone to be gay is just as bad as praying for them to be straight. Whoever he is sexually attracted to when he grows up shouldn’t matter. Damaging this kid by putting pressure on him to be gay will do more harm than good.”

The issue of gay marriage is divisive within the Church of England. The law was changed in Britain to allow same-sex marriage in 2014, however the Church still only allows marriages between a man and a woman.

Holdsworth belongs to the Scottish Episcopal Church, a division of the Anglican Communion (distinct from, though related to, the Church of England), which voted this year to allow willing clergy to solemnise gay marriage. His call for the prayers came in a blog post from January, which resurfaced after the news broke that Prince Harry was to wed Meghan Markle.

It was titled “How to change the Church of England,” and read, in part, that people desiring to bring about acceptance of gay marriage in the Church of England should “pray in the privacy of their hearts (or in public if they dare) for the Lord to bless Prince George with a love, when he grows up, of a fine young gentleman.”

Prince George is third in line to the throne after his grandfather, Prince Charles, and his father, Prince William. As King of England, George will also be head of the Church of England.

Many of the most widely retweeted responses came from right-wing Twitter users, who said that Holdsworth’s gesture was an example of excessive political correctness. 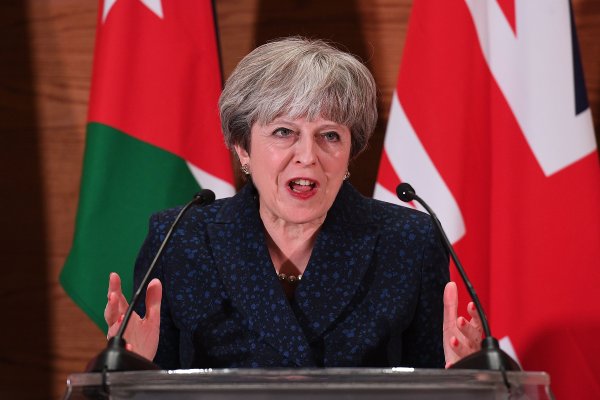 A Trio of Trump Retweets Strains the Special Relationship
Next Up: Editor's Pick