Kim Jong Nam Was Carrying the Antidote to the Toxin That Killed Him, a Malaysian Court Hears

Kim Jong Nam was carrying a poison antidote when he was assassinated in February at Malaysia’s Kuala Lumpur airport, according to a toxicology report submitted at his murder trial.

Twelve bottles containing Atropine, a medication that relieves muscle spasms, clears passages, and can be used to treat poisoning, were found in a backpack that Kim was carrying when he died, according to the local Star newspaper. A toxicology test confirmed that the bottles contained the antidote, a government doctor told the High Court on Wednesday.

According to investigators, Kim Jong Nam, a half-brother of North Korean leader Kim Jong Un, died on Feb. 13 when he was exposed to VX, a toxic nerve agent that the U.N. classifies as a weapon of mass destruction. Two women, Doan Thi Huong from Vietnam and Indonesian Siti Aisyah, are standing trial for Kim Jong Nam’s murder, and face the death penalty if convicted. They have pleaded not guilty, alleging that they were deceived into participating into the assassination as part of what they believed to be a television prank show that involved smearing a harmless liquid on an unsuspecting passerby.

The Nuclear Threat Initiative, a nonprofit that monitors weapons of mass destruction, estimates that North Korea possesses between 2,500 and 5,000 tons of chemical weapons agents, including sarin and VX, a potent nerve agent that forces muscle contractions, and prevents breathing, causing death in minutes or hours.

Last month, Malaysian authorities named five North Korean suspects believed to be involved in the orchestrating the assassination. The men, named in court as Hong Song Hac, 34, Ri Ji Hyon, 33, Ri Jae Nam, 57, and O Jong Gil, were captured on CCTV cameras in Kuala Lumpur airporton the day of the assassination. They were also observed meeting with a North Korean Embassy official, but are believed to have fled the country shortly afterward.

Three other North Koreans, including an embassy official and an employee of North Korea’s state airline, were allowed to return to North Korea at the end of March after giving statements to police. The North Koreans were exchanged in a swap for nine Malaysians — three diplomats their families, including four children — who had been trapped in North Korea by a travel ban, Reuters reported. 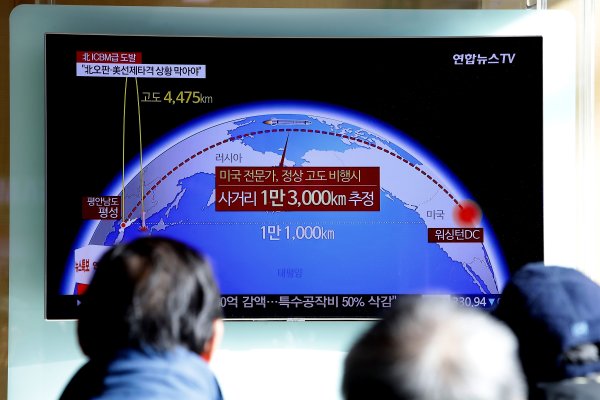 North Korea's Latest Missile Traveled Way Past the Edge of Earth's Atmosphere
Next Up: Editor's Pick