While the White House has said that President Donald Trump won’t be campaigning for Roy Moore before the Alabama special election on Dec. 12, the president may still bash Moore’s opponent within earshot of Alabama voters.

Trump is planning to hold a rally in Pensacola, Fla., about 20 miles from the Alabama state line, according to the Washington Post. The campaign-style event will take place Dec. 8, just four days before the Alabama special election.

On the campaign trail last year, Trump’s rallies were known as raucous affairs the then-candidate often veered off script to comment on daily news or attack opponents to cheering crowds. He has held fewer rallies as president, but the style remains similar.

White House staff told the Post that Trump will likely use his event to criticize Democrats and may specifically call out Moore’s opponent, Doug Jones.

Pensacola falls in the same media market as Mobile, Ala., according to the Post, which could mean the president will reach Alabama voters without having to travel to their state or hold a specific event for Moore.

White House Press Secretary Sarah Sanders said earlier this week that Trump would not travel to Alabama, but added: “the President obviously wants people who support his agenda.”

“The President is not planning any trip to Alabama at this time. And, frankly, his schedule doesn’t permit him doing anything between now and Election Day,” she said at the press briefing on Monday.

As Moore has fought accusations of sexual misconduct with teenagers, Trump has backed up the Alabama Republican, saying “he denies it” and emphasizing that he does not want a “liberal person” to win the seat. The president also railed against Jones on Twitter, and reports have said he has been happy to see Moore recover in the polls. 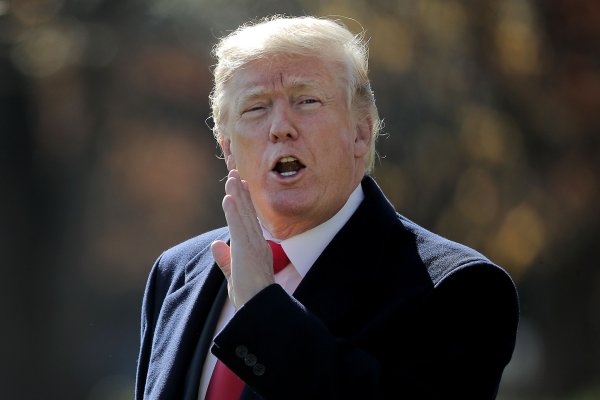 Trump Lashes Out at the Wrong Theresa May on Twitter
Next Up: Editor's Pick